The first round of the FCS Playoffs kicks off on Saturday, with 16 teams competing for the opportunity to square off next week against the top eight seeds.

Share All sharing options for: 2013 FCS Playoffs schedule: Round 1 TV times and matchups

The winners of the games on Saturday will meet the top eight seeds in the playoff on Dec. 7.

Coastal Carolina enters the playoffs with a 10-2 record, representing a remarkable turnaround under the leadership of head coach and former Ameritrade CEO Joe Moglia. The Chanticleers' only losses on the season came against South Carolina and a Charleston Southern, the latter a narrow 31-26 loss after CCU stormed back from a 31-6 deficit. But the Chants have benefited from a weak Big South schedule in 2013 and has a tough task ahead, as Bethune-Cookman boasts the No. 2 overall defense in the FCS.

Don't be scared away by South Dakota State's 8-4 record. Two of those came against Nebraska and two-time defending FCS champion North Dakota State. The Jackrabbits have a win over No. 4 Southeast Louisiana to their credit and pose a real threat to knock off 9-2 Northern Arizona on Saturday night.

The victor in the 1 p.m. contest between Furman and South Carolina State will likely see its playoff run end the following week against No. 1 North Dakota State. The Bison have won the past two FCS national championships and own a five-game winning streak against FBS schools, including a 24-21 win over Kansas State to open their 2013 season.

It will be similarly difficult road for the winner of the Butler-Tennessee State game, which will encounter No. 2 Eastern Illinois in round two. The 11-1 Panthers are one of three playoff teams that can claim a victory over an FBS program (a dominant 40-19 win over San Diego State), and their only loss came to Northern Illinois, which is one win away from a second consecutive appearance in a BCS bowl. 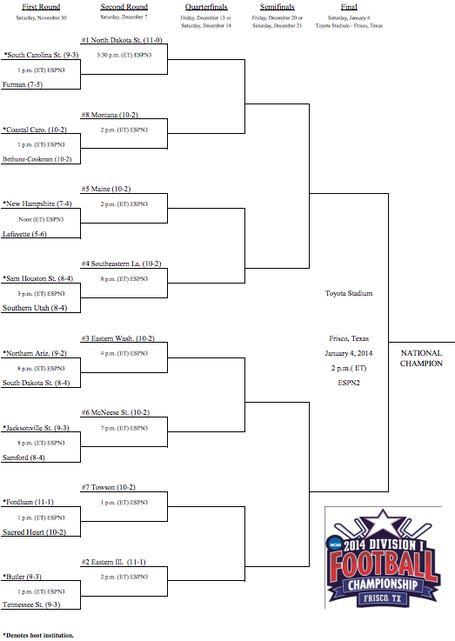