Auburn beats Arkansas, and the Bielema-Malzahn rivalry has just begun

A native Arkansas son beat the state's current most visible employee in the home of the Hogs on Saturday. How it happened shows this feud isn't over yet.

Share All sharing options for: Auburn beats Arkansas, and the Bielema-Malzahn rivalry has just begun

FAYETTEVILLE, Ark. -  That play wasn't a swinging gate, Bret Bielema swore. The fact it was the play the first-year Arkansas head coach alleged was somehow missing from Auburn's official game tape, sparking a week's worth of headlines in the process, was coincidental.

"Nah. You guys read too much into that," a noticeably sheepish Bielema said after the Tigers' 35-17 win on Saturday.

Auburn's similar formation is code-named Batman and is definitely not a swinging gate. Bielema said Arkansas' version, which is closer to a traditional swinging gate, is named Field Goal Buehner. It's named after Razorbacks wide receiver Brian Buehner, who threw the pass to tight end Austin Tate to convert a crucial fourth-and-three on the Auburn nine-yard-line, down 28-10 at the end of the third quarter.

Center Travis Swanson said after the game that the offense first started practicing Field Goal Buehner for the first time on Tuesday, which was a day after Bielema's public comments.

"We practiced it, but just in case the situation arose, I guess. Not because of anything in the news," Swanson said.

Some of his teammates didn't shrug off the coincidence.

Mitchell was asked if the team enjoyed seeing that particular play, what with it just happening to be a coincidence and all, of course.

"Oh yeah, yeah, yeah, Coach Bielema and Coach Malzahn being two strong-headed coaches and all, I did get a little laugh out of it, but uh, I try not to look at it that way," Mitchell said with a smile.

"It was pretty good," Malzahn admitted. "I mean, I almost called time out. I was kind of kicking myself that I didn't call time out before. It was a well-executed play."

As sure as Arkansas didn't run the exact play it accused the Tigers of hiding on film, Auburn's Anthony Swain absolutely didn't fake a sudden injury on the very next play, because that kind of bizarre gamesmanship isn't the kind Malzahn would stoop to.

"We don't tell our kids to fake," Malzahn pled after the game, reinforcing his big, bold statement from July against such chicanery.

Never mind that Swain, in 40-degree weather, seemed to suffer the world's quickest onset leg cramp in a manner that suggested sudden sniper fire rather than a muscle pull. He wasn't made available for comment afterwards.

Here's what Bielema saw (via SI): 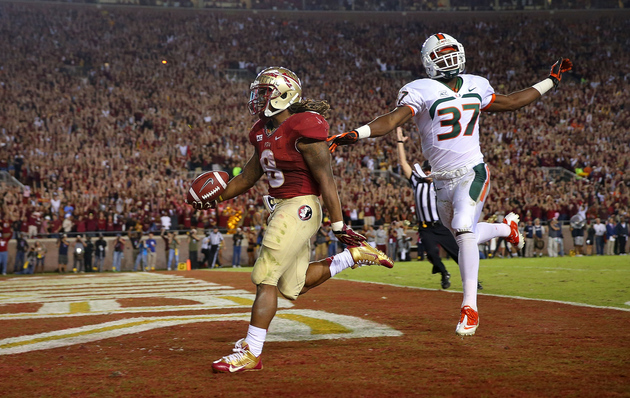 But even without having actually shared a bed, Bielema has time and again heaved a divorcee's disgust at Malzahn and Auburn since he arrived in the SEC. First it was his displeasure with the alleged unsafe conditions created by up-tempo offenses like Malzhan's, and it's evolved from there, each time with Bielema taking the initiative to jab publicly.

Malzahn, the Northwest Arkansas native, was twice turned down for the same Razorbacks job that was offered to Bielema without much lobbying. Both became SEC head coaches for the first time on Dec. 5 last year, and now Malzahn's Auburn and its flashy no-huddle make for a BCS contender at 8-1 while Bielema is struggling to graft a run-heavy, huddle-friendly, pro-style offense onto the 3-6 remnants of Bobby Petrino's failed empire.

The narrative to date is of a native son shining in spite of his home state, which is still fractured when debating his real worth. Meanwhile, that bawdy Yankee the Razorbacks hired is trying to drop a 351 engine into a totaled Ford Escort, with no success as of yet.

"It's not really about all that," the booster said. "Well, shit, it might be, but I don't think that's how Bielema operates. I think he's smarter than that, until the few times when he himself thinks he's smarter than he actually is, and you get him saying all this stuff in public."

"If you come to Arkansas from the Big Ten after Petrino and you want to overhaul everything, you want to show your value as soon as possible, so you try and knock off Auburn."

But if not some kind of weird jealousy of Malzahn, the former prodigal son, why all this hate on Auburn?

"Because you probably won't knock off LSU, and you're not going to touch Alabama. You can wait out Manziel leaving Texas A&M, and in a few years you'll look good there solely on attrition. You're supposed to already be better than everyone else (Mississippi State and Ole Miss), so then there's just Auburn. You beat them bad and often, you can take that momentum and start sealing off Texas recruits from everyone else in the division except A&M and maybe LSU."

"You start beating Auburn," he concluded, "and you're already No. 3 in the West." 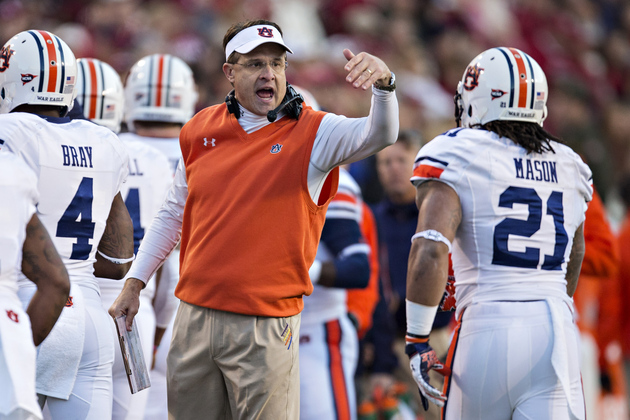 Whether it's envy or tact is irrelevant for now, as Arkansas seems confined to No. 7 after Saturday's loss to Auburn. Worse than just a loss, it was a game that seemed tailor-made to expose Bielema's tempo pearl-clutching as hypocrisy. Maybe, by Gus's design, it was:

"With as many damn receivers as Petrino tried to bring in, we should be catching the ball."

If any offense could've been accused of trying to fatigue a defense, it wasn't the Tigers -- with almost the exact same amount of called runs, they averaged two yards more per play than Arkansas in a fraction of the time, beating the Hogs' defense with ruthless efficiency, not malicious gassing.

"I'm not too sure about all that stuff he says against the spread," an elderly fan said while waiting on a parking shuttle. "But I do know that with as many damn receivers as Petrino tried to bring in here, we should be catching the ball better."

"There's so many positive things that are going on right now that don't pop out to people who aren't around this program. Right now it's baby steps. I wish we were sprinting, but we're walking," Bielema said.

It might be ennui or caution, but this Year One feels eerily quiet by the Razorbacks' standard of fandom. The culture that trademarked self-inflicted FOIA scandals is either anesthetized in the wake of the Nutt/Petrino decade, or so conditioned after that tumultuous run that even Bret Bielema's swinging gate can't yet stir passion.