Florida State has gained ground on BCS No. 2 Oregon in both human polls that alter the standings. The official BCS rankings will be released around 8:40 p.m. ET Sunday. Check back here.

Three of the top five teams had bye weeks, and they all stay put. Alabama holds onto the top spot with Oregon right behind, as Baylor doesn't move from their fifth spot.

In the Coaches Poll, the first of the day to be released and one of the two that count toward the BCS standings (which will be released around 8:40 p.m. ET Sunday), Florida State snags three first-place votes, one from Oregon and two from Alabama. FSU needs to pick off as many as possible -- with a likely No. 1 ranking in the computers, the Noles have ground to make up in the polls.

And the Harris Poll, which also counts toward the BCS, has Florida State picking up a little bit of ground as well: 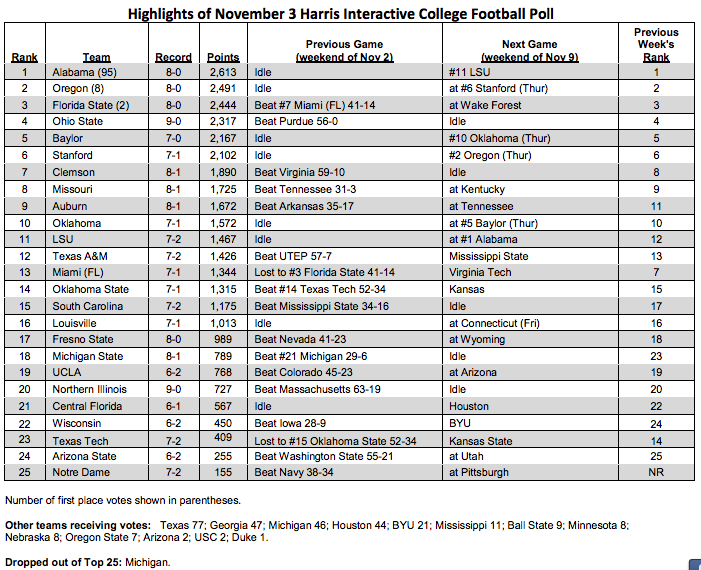 The new Associated Press poll, which doesn't count toward the BCS (but can sometimes foreshadow future Coaches moves), is also out now:

The Hurricanes fall after their blowout loss to the 'Noles. Oklahoma State moves up after their big win over Texas Tech, while the Red Raiders fall again after their second straight loss. Michigan falls out after being simply dominated by Michigan State, while the one-loss Spartans rise after gaining some considerable national attention.

After Florida State received one of their big tests this past weekend, three of the other main national title contendors get their gutcheck games this week. Alabama plays LSU Saturday, Oregon plays Stanford Thursday, and Baylor plays Oklahoma Thursday.