Former Miami defensive lineman Dan Sileo offered a bounty to Hurricane players to injure a Seminole. He later claimed he was joking.

Miami radio host Dan Sileo tweeted a threatening message about Florida State running back Devonta Freeman after Saturday night's game in which the Seminoles blew out the Hurricanes.

Sileo, a former Miami defensive lineman employed by 640 Sports, offered a bounty of $1,000 for any Miami player to injure Freeman during the probable ACC title game rematch between the two schools. Sileo also posted a picture of Florida State defensive tackle Timmy Jernigan in the offending tweet, apparently mistaking one player for the other.

Here's a photo of the tweet, via our own Tomahawk Nation: 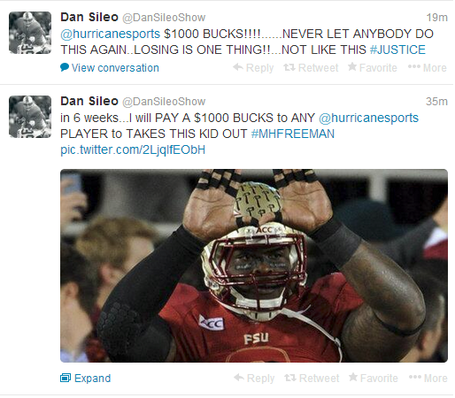 640 Sports is investigating the incident.

Statement from 640 Sports re: Sileo: "640 Sports is just as shocked and stunned as everyone else by this tweet."

The game itself got chippy, with a Miami player sticking his hands through the facemask of a Florida State player in what looked like an attempt to eye gouge.