Saturdays in college football don't get much better than the one we have this week. Century-old rivalries will be played and conference title game berths will be up for grabs. For all the coaches on the hot seat, this weekend will provide them with one final chance to prove to their athletic departments that they are the men to lead their programs for another season. Get ready for a wild day of football.

Here's the full TV schedule for all of Saturday's action. 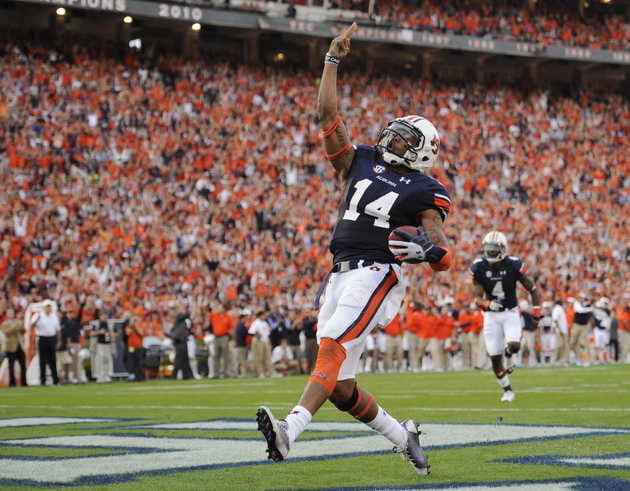 Alabama continues to do what has made them so successful the last few years. AJ McCarron might be having his best season yet, and the Tide's defense ranks No. 1 nationally in scoring defense. Teams simply cannot make mistakes and expect to win against Alabama.

Auburn has been one of the nation's top stories this season. There were some who thought AU might not even make a bowl game in 2013, yet here they are ranked in the top 5 with their lone loss coming on the road to LSU. Auburn's rushing attack is phenomenal, averaging 320 yards on the ground each week.

The X-factor in this game could be the crowd. Granted, the Crimson Tide aren't exactly new to playing on the big stage, but Jordan-Hare Stadium will be at another different level Saturday afternoon. If Auburn is able to get out to an early lead, it could be a long day for 'Bama as the Tigers pound the ball on the ground and eat up clock.

Despite not playing in the same conference, the rivalry between Clemson and South Carolina is as heated as any in the nation. Separated by only 130 miles, there will be no love lost when the two teams take the field at Williams-Brice Stadium under the lights.

The Tigers still have an outside shot at making the national championship, though they will need some help from a couple of the teams ahead of them in the rankings. Tajh Boyd is playing as well as any quarterback in the country, throwing for 3,248 yards and 29 touchdowns this season. Add in a solid run game to the mix, and Clemson should challenge South Carolina's defense all game.

This could be the final regular season game of Jadeveon Clowney's career in Columbia. While he hasn't had quite the season some pundits expected, Clowney still changes the entire game with his presence along the line. It will also be the final home game for senior Connor Shaw, who may be the best quarterback in school history.

In a battle of the SEC's two newest schools, the Tigers will play arguably the most important home game in school history Saturday night.

Mizzou still has a shot to play for the national championship, and a win against the Aggies would clinch the SEC East title in just their second year since joining the conference. A loss would give the division to the Gamecocks. Senior quarterback James Franklin was solid in his return from a separated shoulder last week, and MU's running game continues to fire on all cylinders behind Henry Josey, Russell Hansbrough and Marcus Murphy, who have all rushed for 500-plus yards in 2013.

For Texas A&M, this could be the final regular season game for Johnny Manziel. Kevin Sumlin has said Manziel will announce his NFL decision prior to their bowl game, and most feel he will be playing on Sundays in 2014. For a team some thought would contend for the national championship at the end of the year, they'll need to win this weekend if they want to avoid falling to 4-4 in conference play.