The Tigers have stolen the SEC West from Alabama in the most improbable fashion.

There are singular moments in sports that make you stop and appreciate just how amazing sports can be. With one second left in the fourth quarter and overtime imminent, Alabama lined up for a 57-yard field goal. What followed was arguably the craziest ending in college football history, as Auburn returned the missed field goal 100 yards with no time left to win the Iron Bowl over top-ranked Alabama, 34-28.

Alabama looked shaky early, one of the few times in the Saban era that this team has shown obvious nerves. Those nerves looked justified, as Nick Marshall opened the scoring for Auburn with a blazing 45-yard touchdown run. Everything looked great for Auburn, but Alabama followed up that touchdown with 21 straight points in the second quarter on two touchdown passes from quarterback AJ McCarron and a touchdown run by T.J. Yeldon. Auburn was able to pull back within a score before halftime, though, on a one-yard touchdown rush by Tre Mason that made it 21-14 at the break.

On the other side of halftime, Auburn was able to pull back even on a touchdown pass from Marshall to C.J. Uzomah a few minutes into the third quarter. The score would remain there for the next 15 minutes or so, until an Auburn punt was downed inside the one-yard line. However, their elation would be short-lived, as McCarron went over the top to Cooper on the next play, and he evaded a tackle and took the ball 99 yards to the house. 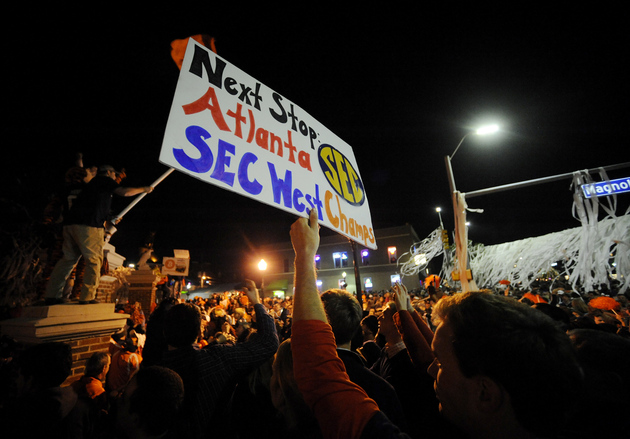 Things were looking dark for Auburn. It was able to block an Alabama field goal with less than three minutes remaining, but it needed a touchdown to keep the game alive. The Tigers hadn't had much success passing all day, but Marshall found Sammie Coates after scrambling for a wide open 39-yard touchdown with 32 seconds remaining to tie the game.

Alabama had a chance for a 57-yard field goal after the official ruled Yeldon stepped out of bounds with one second left. The kick unsurprisingly was short, but what happened next was one of the craziest things you'll ever seen on a football field. Chris Davis fielded the ball deep in the end zone, and then proceeded to take it all the way back for the game winning score with no time left on the clock. In my nearly 29 years on this earth, I have never seen a football game like this one. This registers as crazier than the tipped Hail Mary win over Georgia just two weeks earlier.

With the win, Auburn steals the SEC West away from Alabama and will face Missouri or South Carolina in the SEC Championship Game. In one year's time, Gus Malzahn took the Tigers from 3-9 and winless in the SEC to 11-1 and a possible shot at the BCS title.

Alabama and Auburn came into this game ranked first and fourth in the BCS standings. Auburn won't get to number one, but it may have a chance to jump over Ohio State.

But Did They Cover?

Alabama was a 10-point favorite at kickoff, so they did not cover the spread.

For More On This Game:

For more on the Crimson Tide, check out Roll Bama Roll.

For more on the Tigers, head over to College and Magnolia.

Alabama: A bowl game at some point.