The 2013 Iron Bowl: Auburn should be dead, because we watched it die

Share All sharing options for: The 2013 Iron Bowl: Auburn should be dead, because we watched it die

You should be dead, Auburn.

There are five bullet holes in your jersey and singe marks on your pants. Those marks on your helmet are ... machete? Broadsword? Those bullet holes are right in the middle of your chest, where you would shoot a man to end his life. And yet here you are, unperforated and unbleeding except for that ... we're not even going to talk about what kind of animal left those teeth marks on your ass. They're bigger than a dog's, smaller than a shark's. Possibly rabid. Possibly from a "Saban." You're gonna need shots. Some serious, large-gauge needle shots.

You were dead, and dead-making things happened to you. You were hit with a 99-yard touchdown pass by AJ McCarron that should have killed you, a head shot that had the medics reaching for the body bags, not the bandages. You were outgained on offense by 102 yards and appeared to be in danger of being overrun at, what, 11 different points in the game? We swear we saw them overrun you 11 different times. We totally saw you flattened in the second quarter, when you gave up 21 points. There was dust and screaming, and we swear you were gone.

Why aren't you dead? Everyone who saw this wants to know, because we saw it. We saw how Alabama snuffed out drive after drive, and slowed your blitzkrieg down to three spluttering bursts for touchdowns. You only passed the ball 16 times and didn't even tally 100 yards passing. Alabama didn't even have a turnover; you did.

We gave up hope.

The most dominant offensive line in college football had you in its hands, a fragile egg ready to be crushed and added to Nick Saban's boundless omelet of vanquished souls. Saban was going to eat it for his Saturday dinner, like he always does, alone in the film room and frowning happily.

We gave up hope, which we had because the idea of a game requires some notion of stupid, irrational, and effervescent hope. Alabama's chief effect as a football program had not been pleasure or even a compelling excellence you could admire. It was a cloud of desolation, blocking out all hope of resistance, a sorrow for all but their fans. When Alabama lays a 21-point quarter on you, you do not recover. You lose, they win. They move onto the next line of sad cannon fodder.

We didn't believe that, either. There was no reason to, not with the Tigers offense taking its time, running for first downs like they were setting up for a field goal, marching aimlessly towards some vague spot just outside the Opelika city limits.

There would be someone downfield when Nick Marshall threw just his 16th pass of the night. He found Sammie Coates, and the camera pulled back to show ... Sammie Coates, and grass, and that scene rimmed with lunatics vibrating dangerously around him. It was hard to believe that Nick Saban had not foreseen this, and had some counter built in just for this moment. A safety should have parachuted into the scene. Reinforcements were somewhere, just off the frame, waiting for deployment.

Auburn tied the game, and with Jordan-Hare Stadium seconds from both nervous and structural collapse, Alabama drove until there was one paltry second on the clock and the chance to win the game with a Hail Mary. Or with a field goal no one could make. Saban chose the field goal, and his backup kicker who had not missed three field goals so far that night. You should remember this: when the choice came between trying for the long field goal or the Hail Mary, Nick Saban opted for the savior of mediocre NFL souls, the field goal. He was like a floundering child grasping for the safety ladder in the deep end. It felt like a word no one has associated with Alabama since Mike Shula's cheerful balloon of a head bobbed on the sidelines: desperate.

And who expects that scenario? Who, when faced with the impossible, pulls the pin on the grenade in the bandolier? Who has a returner back to catch the field goal, anticipating the possibility of stealing a game he has no statistical sense winning? What cartoon rabbit pulls the magician from the hat, then smashes him with a giant hammer produced from thin air?

What lunatic shit are you on, Gus Malzahn?

What lunatic shit are you on, Gus Malzahn? That's what we're trying to ask. Who are you? What international cartel's books did you brilliantly launder before entering WitSec under an alias as a rural high school football coach? How did you take the SEC's worst team last year and turn it into this, a team running a mutant Wing-T with five plays capable of shredding the tracks of college football's most fearsomely engineered war machine? You have a former DB who cannot pass at quarterback, and the former head coach of one of college football's worst teams in recent history at defensive coordinator.

How? How is any of this working at all, much less against the best college football coach alive? Have you flown a spacecraft before, and if so, did you steal it? The answer is yes to both, but we want to hear it publicly, from you and on the record.

Chris Davis returned a missed field goal 109 yards through a forest of burly, huffing Alabama lineman for a win. That's how unreality is defined: a high school coach who once traded a car for a fax machine got his team to cheat football death a hundred times in a night, and then came out victorious against the best football team of the era.

We are out of words. You should be dead, Auburn, because we saw you die. And here you are, breathing in the flesh, able to say this: you made the Alabama Crimson Tide kick the winning touchdown for you. 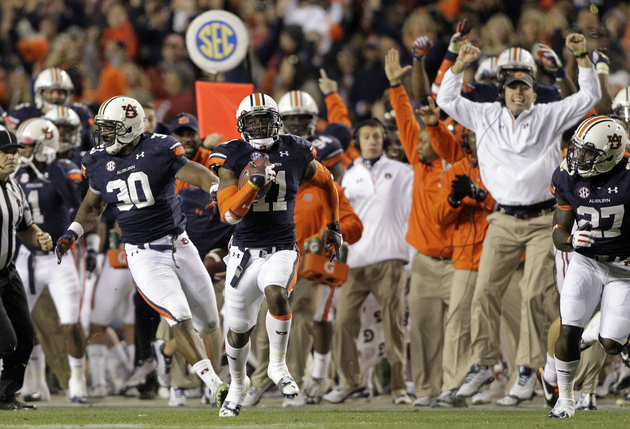