Raise your hands if you had the Missouri Tigers representing the SEC East this year, because you're probably lying. Or a prophet.

In order to book their trips to Atlanta and a berth in the SEC Championship Game, the Missouri Tigers had one duty against the Texas A&M Aggies. They didn't need to stop Johnny Manziel, or maintain gap integrity, or execute on offense. Those things would prove to be important -- and in fact, they did a decent job of all three -- but they weren't necessary.

No, the Tigers just needed to win, by any means necessary.

That mission got off to a bad start early, when A&M struck first for a 7-0 lead, thanks to a 29-yard touchdown run by Aggie running back Tra Carson. The Tigers would remain silent for most of the first half, but finally found the end zone themselves thanks to a 38 yard connection from James Franklin to Dorial Green-Beckham.

Not to be upstaged, Johnny Manziel -- who was visibly in pain throughout, thanks to several hits from a ferocious Missouri defense -- was able to buy enough time to loft a touchdown pass of his own, a 32-yard lob to Derel Walker that made the score 14-7 shortly before the half. To make it even more impressive, Manziel was nailed by an oncoming Michael Sam maybe a split second after the pass.

That would remain the score entering the third quarter, after Missouri missed a field goal with time expiring in the first half.

Whatever it was that Gary Pinkel told the Tigers at halftime seemed to work, though, as Missouri roared back for 14 unanswered points and a 21-14 lead. They first scored on a Marcus Murphy two-yard touchdown run, and then again on a five-yard pass from Franklin to L'Damian Washington. That lead would hold until 10:43 of the fourth quarter, when Ben Malena rushed for a seven-yard touchdown to tie it back up.

Both teams had chances to score again after, but the 21-21 deadlock was broken by the Tigers with 3:34 to play, when Henry Josey raced up the middle for a 57 yard dash to the end zone -- he saw only blocked Aggies immediately in front of him, slipped off another, and the rest was simply a matter of not getting caught.

That would give the ball back to Manziel, but the man they call Johnny Football was unable to answer with a tying score, going three and out on what would prove to be their final drive of the game. Missouri ran out the clock after the Aggies punted, and secured the 28-21 victory. 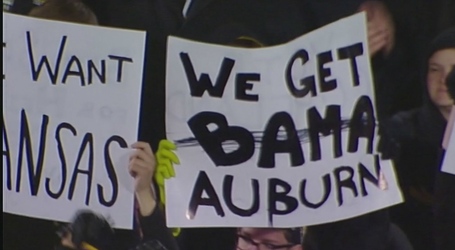 Box Score Hero: This section should be shared between Henry Josey, who rushed for 93 yards and a touchdown, and James Franklin, who completed 17-of-27 passing for 217 yards and two scores of his own.

Rankings Ramifications: Depending on where Alabama settles after its loss to Auburn, the Tigers could move up at least one spot in the BCS rankings, while A&M will likely fall out of the BCS rankings as a result of the loss.

But Did They Cover? Missouri was a four-point favorite at kickoff. They did cover.

For More On This Game: For more on Missouri, head over to Rock M Nation, while Good Bull Hunting has Texas A&M covered.

Next Week's Schedule: Texas A&M's season is over. Missouri will head to Atlanta and face Auburn next week.