The Big 12 Offensive Freshman of the Year will be taking his talents elsewhere.

Texas Tech quarterback and Big 12 Offensive Freshman of the Year Baker Mayfield will transfer from the program after taking much of the college world by storm this season, according to a report.

Just spoke with Baker Mayfield, who confirms he will transfer after one season at Texas Tech. He will not play in Holiday Bowl vs. ASU.

Mayfield says he's transferring due to miscommunication with the Tech coaching staff. He wants a fresh start somewhere else (TBD).

Mayfield was the first known walk-on true freshman to start at quarterback at a power conference program, excelling in spring practice and moving up the depth chart after injuries to other Red Raider quarterbacks. He was an off-again, on-again starter for Texas Tech this season, playing in eight games and throwing for 2,315 yards with 12 touchdowns against nine interceptions.

Get to know Baker Mayfield 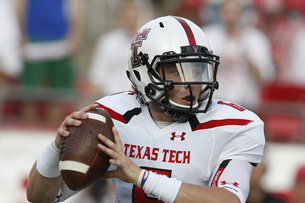 Sophomore Michael Brewer was expected to be the starter for Texas Tech this season, with highly touted true freshman quarterback Davis Webb as another option. The two battled for the job in spring practice, but a back injury to Brewer allowed Mayfield to battle with Webb for the job -- which he surprisingly won right before the season.

Brewer played in only three games this season, completing seven of 10 passes for 65 yards and a touchdown. Webb played in nine, throwing for 2,315 yards and 16 touchdowns against nine interceptions. The two are expected to compete for the job this spring, although Webb may have an advantage considering his game experience this season.

Mayfield received scholarship offers from Florida Atlantic, New Mexico, Rice and Washington State coming out of high school, and could end up at one of those locations.

A similar situation unfolded at Maryland three years ago, when ACC Freshman of the Year Danny O'Brien transferred to Wisconsin. The difference? The Terrapins were in the midst of a coaching change, while Texas Tech is not.

• What the Playoff would look like, from four to 32 teams

• Ranking all 35 bowl games by watchability