Three favorites were sent home in the FCS quarterfinals. Will there be more upsets in round three?

North Dakota State will have to continue its quest for a third consecutive FCS championship with the knowledge that head coach Craig Bohl will be leaving for Wyoming at the end of the season. The uncertainty caused by Bohl's impeding departure is the biggest reason to think that the Bison might struggle to dispatch the upstart Coastal Carolina Chanticleers, who are fresh off a 42-35 upset of No. 8 Montana.

Eastern Illinois is a two-touchdown favorite over Towson for the teams' meeting in the FCS quarterfinals on Saturday. It will be a difficult task for Towson to topple the second-seeded Panthers, who trounced Tennessee State 51-10 in the second round and own a 40-19 blowout of the bowl-bound San Diego Aztecs. After entering halftime tied with Fordham in their second round game, Towson pulled away with a 14-point third quarter that secured the Tigers' 48-28 win, their first FCS playoff win in school history.

No. 3 Eastern Washington vs. Jacksonville State

Jacksonville State has had a nice run into the FCS playoffs, knocking off Samford and No. 6 McNeese State by a combined 62 points. But the Gamecocks will face their stiffest test yet when they take on Eastern Washington, one of three FCS teams still standing that can claim a win over an FBS opponent, in this case a 49-46 win over Oregon State on Aug. 31. The Eagles pulled away from South Dakota State in the second half of their 41-17 win in the second round.

No. 4 Southeastern Louisiana vs. New Hampshire

New Hampshire sent No. 5 Maine packing with a 41-27 upset win in the second round of the playoffs. Meanwhile, Southeastern Louisiana narrowly avoided suffering an upset loss of its own against Sam Houston State. The No. 4 Lions are favored to win by one touchdown.

The winners of the quarterfinal games on Friday and Saturday will meet in the semifinal round next weekend. To see how the winners will be paired, check out this playoff bracket, via the NCAA. 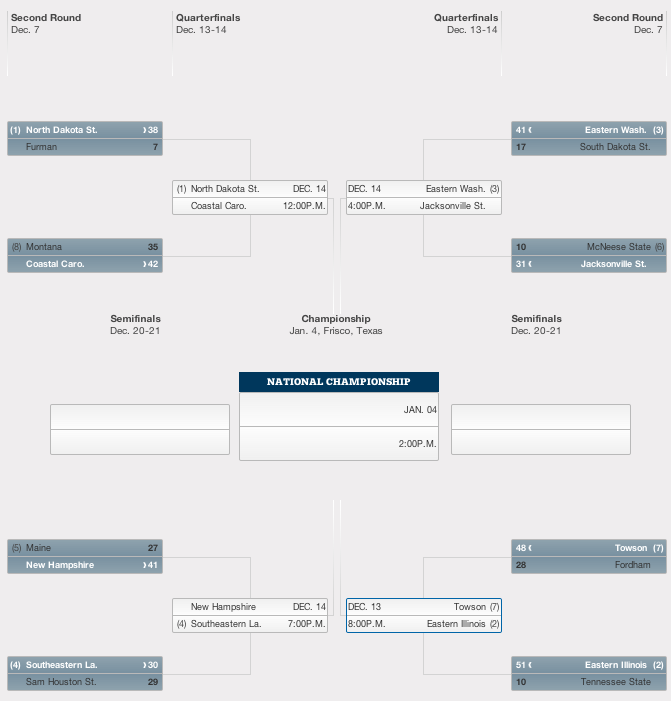 • Eight things we learned about the College Football Playoff

• How the Heisman was won: A look at Jameis’ year

• Long CFB reads | Auburn and the future of the SEC