After a decade in the wilderness, two once-proud programs take their redemption stories to Albuquerque to kick off bowl season.

It is rare that you're going to see two elite teams facing off in a pre-Christmas bowl, and the Dec. 21 Gildan New Mexico Bowl will in no way give you elite play. But what you're looking for early in bowl season is motivation, energy, and interesting back stories. Washington State and Colorado State will probably bring plenty of that to the table.

If this were 2002, of course, a bowl matchup between these two teams would have been second-tier at worst. But since a November '02 peak (Wazzu reached as high as third in the AP polls, CSU 16th) and some solid play in 2003, both programs suffered nine seasons that were somewhere between unmemorable and downright cruel.

It was even worse for WSU. Mike Price left for Alabama (briefly) after 2002, and while Bill Doba went 10-3 in his first season in charge, he went just 20-26 and was canned. Paul Wulff took over and won just eight games in four seasons. Wulff's 2008 and 2009 teams were among the worst on record, from an advanced-stats perspective.

Both of these programs are moving up.

In 2012, both WSU and CSU entered new eras. Former Nick Saban assistant Jim McElwain took over in Fort Collins, while former Texas Tech head coach Mike Leach boarded the ship in Pullman. After forgettable first seasons in charge, both coaches engineered second-year surges. Wazzu improved from 98th and 3-9 in the F/+ rankings to 58th and 6-6; CSU improved from 119th and 4-8 to 68th and 7-6. Bowls feature stories of teams on the way up or down or fully stagnating. Put both of these programs in the "up" camp. 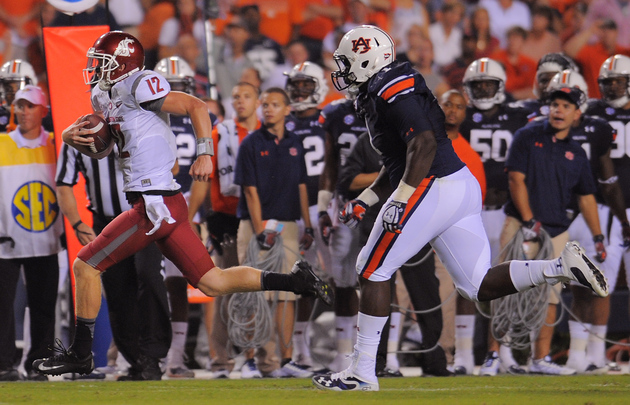 For the season as a whole, Wazzu has been only mediocre, but the Cougars made the most of their upset opportunities, and they're bowling because of it. A stunning, early, 10-7 win over USC and a late upset of Arizona, both on the road, allowed the Cougs to get to 6-6 despite blowout losses to Stanford, Oregon State, Oregon, and Arizona State (average score: Opponent 56, WSU 25). And let's say that early near-upset of Auburn (a 31-24 loss on August 31) continues to look better. WSU has brought its best efforts in its biggest games and has its first bowl bid in a decade to show for it.

As with Washington State against Auburn, perhaps Colorado State's most impressive performance of the season came in an early loss in the Yellowhammer State. The Rams trailed Alabama just 17-6 heading into the fourth quarter in Tuscaloosa on September 21 before the Crimson Tide pulled away with a couple of late scores. That hinted at some potential (and some I-know-some-of-Saban's-secrets coaching from McElwain), and by handing to Kapri Bibbs and continuing to improve incrementally (enough to beat Wyoming, Hawaii, Nevada, New Mexico, and Air Force by an average score of 50-24), CSU was able to not only improve but also score enough wins to reach Albuquerque.

Passing downs on offense. Mike Leach doesn't yet have the star power in the receiving corps that he produced in Lubbock, but he has enough pieces to continue one trend from his Texas Tech days: quality offense on passing downs. The ball comes out of quarterback Connor Halliday's hand pretty quickly and can go to any number of receivers. Gabe Marks leads the way with 69 catches for 770 yards, but nine other players have caught between 25 and 50 passes.

CSU's pass rush is decent -- senior linebacker Shaquil Barrett has 12 sacks (almost half of the team's total) and 20.5 tackles for loss -- but Wazzu doesn't afford you many blitz opportunities. And if CSU doesn't get to the QB, its defensive backs probably don't get to the ball. Falling behind schedule just isn't that big a deal for an offense like the Cougars'. They're passing on every down anyway.

Passing downs on the other side of the ball, too. Colorado State is pretty explosive offensively, but the big plays come on standard downs. Once behind schedule, the Rams hand the ball off and hope for a break. (In this way, CSU's offense is quite a bit like the Alabama offenses McElwain ran a few years ago. The first goal is to score, but the second goal is to make sure the defense is in a decent position to succeed.)

The Wazzu defense, meanwhile, closes out drives quite well. The pass rush is anything but memorable, but Wazzu reacts, swarms, and sends the punt return team on the field. If you aren't getting big plays, WSU is getting you off of the field. 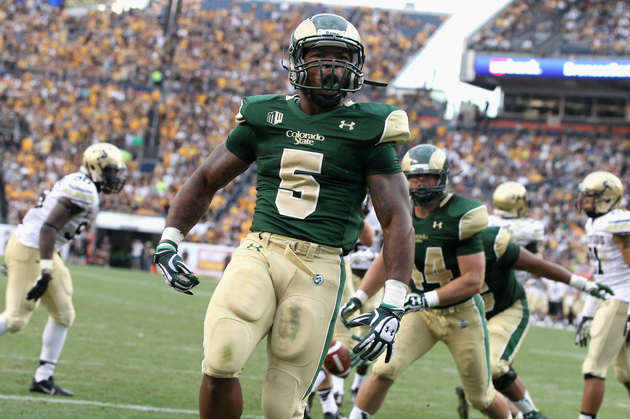 You know what keeps you from struggling on passing downs? Avoiding them. With a nice mix of quick passing to Rashard Higgins and Joe Hansley (combined: 112 catches, 93 on standard downs) and a ton of handoffs to running back Kapri Bibbs, CSU stays on schedule quite well. The variety keeps defenses from focusing on the run, and eventually either Bibbs breaks a big gain or another receiver -- Tight ends Kivon Cartwright or Crockett Gilmore up the seam? Receiver Charles Lovett out wide? -- gets open downfield.

Kapri Bibbs is awesome. In 2012, backs Donnell Alexander and Chris Nwoke were solid at avoiding losses and pecking away for a few yards. They combined to average just 4.2 yards per carry, but they weren't moving backwards. Bibbs, a junior college transfer, combines solid loss-avoidance ability with big-time speed.

Let's put it this way. It's probably not a coincidence that CSU is 5-2 since Bibbs took over as the primary ball-carrier. In the first six games, Bibbs averaged 11 carries and 72 yards per game; in the last seven: 27 carries, 163 yards per game. He had 603 yards and 10 touchdowns versus Nevada and New Mexico alone. He trailed off in the final two games, thanks in part to a "lower extremity" injury, but a well-rested Bibbs could be the best player on the field in Albuquerque.

WSU safety Deone Bucannon could draw exception to that, but, well, each could have opportunities to make his case in the open field on Saturday.

The New Mexico Bowl offers CSU an interesting opportunity. The Rams will face drastic rebuilds on both the offensive and defensive lines next year, but a big performance from the skill positions on offense and the secondary on defense would probably give us pretty high expectations for the Rams. Bibbs is a sophomore, quarterback Garrett Grayson is a junior, and three of four starters in the receiving corps (including Higgins, a freshman) will all return. And while the defensive line is full of seniors, that's basically it on defense. With Fresno State and Boise State both rebuilding a bit in different ways next year, CSU could be a trendy pick to finish high in the Mountain West, and this game will provide a showcase for justifying that pick.

On the opposite end ... well, Washington State will still be in the Pac-12 North next year, and aside from the SEC West, the North might be the toughest division in college football. (Hell, it might be better than the SEC West at this point.) That alone is going to temper expectations no matter what happens on Saturday, but with Halliday only a junior and the receiving corps littered with sophomores and juniors, the Leach passing game should expect to thrive next year. WSU's fate will be determined instead by how well the Cougars can restock on a defense that will get pretty depleted by graduation.

Bowl games are tough to project because of bowl layoffs and differences in motivation levels. But the break here is minimal, and both teams should be excited to go in this one. If that's the case, Wazzu will hold an edge, but not a big one. And we should have some fun either way.