The big 2013 Las Vegas Bowl breakdown: Bet on USC (if Trojans bring it)

Motivation matters double in bowl games; does USC have it? Playing for their second interim coach of the season, the Trojans can win their 10th game of the season, but after last year's egg-laying in El Paso, they have to prove they want to be there. Fresno State probably does.

Share All sharing options for: The big 2013 Las Vegas Bowl breakdown: Bet on USC (if Trojans bring it)

Call it the Motivation Bowl.

After winning six of seven for interim coach Ed Orgeron after Lane Kiffin's firing, USC got whipped at home by UCLA, lost Orgeron after the full-time hiring of Steve Sarkisian, and will play in the Las Vegas Bowl with a different interim coach, Clay Helton.

Meanwhile, Fresno State was in line for a BCS bowl bid until a complete defensive collapse against San Jose State. The Bulldogs rallied to take down Utah State in the MWC title game, but the Dec. 21 Vegas Bowl is still not the Fiesta Bowl.

If only one of two teams shows up ready and willing to play, the advantage goes to ... whichever team that is. And if both (or neither) teams bring it, give the nod to the Trojans. 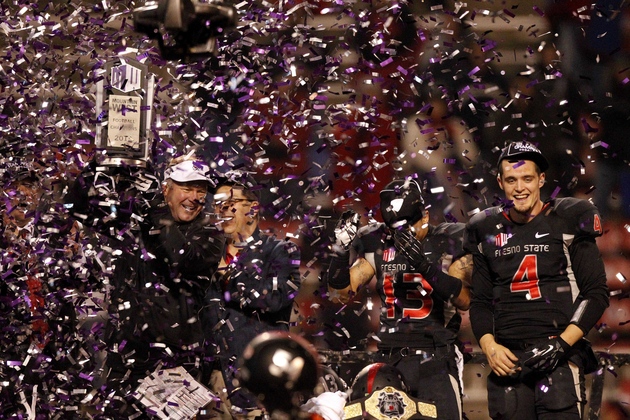 Fresno State's season was nothing if not entertaining. The Bulldogs came back from a double-digit deficit to take down Rutgers in overtime to start the season, built and (at least partially) blew pretty sizable leads against Cal Poly, Boise State, and Hawaii but won anyway, survived trips to San Diego State and Wyoming, and got to within two games of a perfect season.

But the trip to San Jose State resulted in a 62-52 loss, and suddenly an 11-1 finish -- the Bulldogs' first 11-win season since 2001 and second since 1991 -- felt almost a little disappointing. Still, a Saturday win would be their 12th; that would be the first time they've pulled off that one.

It's difficult to describe USC's season in fewer than about 2,000 words, but we'll try.

The Trojans returned quite a bit of talent from a disappointing 2012 squad, but a new piece at quarterback and shaky, sanctions-related depth (not to mention a new defensive coordinator) were enormous question marks. The defense was outstanding early, but USC fell, 10-7, in its home opener against a Washington State team that has no business holding anybody to single digits. The Trojans beat Boston College and Utah State, but following a 62-41 pasting at the hands of Arizona State, Lane Kiffin was fired at LAX.

Ed Orgeron took over, and USC went 6-1 down the stretch before losing, 35-14, to UCLA. Now with the rare second interim coach of the season, the 9-4 Trojans will go for one of the most confounding 10-win seasons in their history.

The Bulldogs keep you out of the backfield. Perhaps one of the biggest irresistible-force-vs.-immovable-object matchups in this game comes up front, where Fresno State's offensive line will do battle against a strong, attacking USC defensive front. Fresno quarterback Derek Carr tends to release the ball pretty quickly, which helps the sack numbers, but the Bulldogs' offensive line also does well at keeping defenders' hands off of ball-carriers in the run game. If Fresno State can keep moving forward and stay on schedule, it will negate one big advantage the USC D is used to having.

USC probably won't maintain drives. The Trojans are decent at generating quick, explosive scores, but they are one of the nation's worst when it comes to putting together the longer, eight- or 10-play drives. And since Fresno State likes to play as fast as possible and rack up the snap count (the Bulldogs ran at least 80 plays in nine of 12 games and at least 90 in four), scoring quickly almost plays into the Bulldogs' hands unless you can continuously score quickly.

Play for play, Fresno State can probably hold its own with USC's flaky offense. Trojan running backs Silas Redd (out) and Tre Madden (questionable) are injured, and if the Bulldogs can leverage USC into passing downs, they will likely tee off on quarterback Cody Kessler.

Fresno likes chaos and will try to create it; can USC maintain its composure if it falls into either a shootout or a festival of passing downs?

USC really, really defends the pass well. Thanks to both a strong pass rush (even without star end Morgan Breslin) and a fun, aggressive secondary, USC has one of the best pass defenses in the country. Obviously that's an important thing when you go up a Fresno State offense that passes more frequently than any team in the country not named Washington State.

The Bulldogs have faced only two defenses ranked in the top 60 of Passing S&P+ (No. 27 Utah State, No. 38 San Diego State), and here's Derek Carr's passing line from those two games: 71-for-110, 702 yards, five touchdowns, two interceptions, five sacks, and a very mortal 5.7 yards per pass attempt. Because Fresno is willing to let Carr throw 70 times if necessary, he's going to end up with yards. But if USC holds him to under 6.0 per attempt, the Bulldogs will struggle to win.

If somebody's going to derive a special teams advantage, it's probably going to be USC. Nelson Agholor is a hell of a return man, and Fresno State has struggled in kick coverage this year. Plus, the Trojans have blocked five kicks this year (three from Soma Vainuku), and Fresno has allowed three blocks. You never know when or if special teams is going to make a difference -- it's never a sure thing -- but if there's an edge, it's the Trojans'.

In a way, both teams will be starting over in 2014. Steve Sarkisian will take over at USC after the bowl game, and while he will certainly inherit some strong talent -- receiver Nelson Agholor, defensive tackle (and second-leading tackler) Leonard Williams, a young, exciting secondary, and some fun running backs -- he'll still have to deal with turnover in the trenches, and he'll inherit a quarterback situation that is far from concrete. (Even if Marqise Lee was injured, USC should never rank 58th in Passing S&P+.) USC might eke into the preseason polls out of respect, but this bowl game will have almost no impact on that unless Agholor or one of the running backs goes for 250 yards. (Against Fresno State, that's certainly possible.)

Meanwhile, Fresno State should return quite a bit of its core in 2014; barring defection to the NFL, Davante Adams will continue to be a star, for instance, and 13 of 22 projected Vegas Bowl starters are underclassmen. But this is Derek Carr's 39th and final start as a Bulldog. That alone might make folks bearish on the 2014 Bulldogs. (And that says nothing of the fact that the coaching carousel is still spinning, and head coach Tim DeRuyter will still be on rumored watch lists.)

Projecting bowl games is so dicey because of motivations, interim coaches, etc. On paper, USC should be able to prevent Fresno State from striking big in the passing game and eventually score enough to pull away. But on paper, USC hasn't yet been coached by coach No. 3, with coach No. 4 waiting on the sideline.

If USC comes to play, the Trojans, who were quite close to 11-2 overall and have an F/+ ranking higher than you would think, are a much better team and should cruise. But let's just say that last year's egg-laying in El Paso lingers. USC has to prove it wants to win this game. If it does, it probably will. Otherwise, Derek Carr gets to go out a winner.