Khalil Mack heads an aggressive, intrusive 3-4 defense for Buffalo, while Rocky Long's 3-3-5 D still confuses and handcuffs SDSU opponents. Both defenses hold pretty significant advantages over opposing offenses, if you're into that.

The Dec. 21 Famous Idaho Potato Bowl is a litmus test.

It is bowl season at its silliest, pitting two teams from very far away on a blue turf field in a very cold state in mid-December. To the winner goes a trophy bowl of potatoes. It is inane, pointless ... ridiculous, even. If you enjoy this bowl, if you watch it and tweet about it, you are a bowl-lover. If you can't get past the unnecessary nature of any of this, bowls just aren't for you.

If you type "San Diego to Boise" or "Buffalo to Boise" into Google Maps, Google makes flight suggestions and tags driving directions really lightly in the bottom of the search window. It's 14 hours and change to drive from San Diego, and it's a solid 32 hours across winter hell (Iowa, Nebraska, Wyoming, part of Utah) from Buffalo, but surely you're flying, right?

We don't know how many local fans will reach Boise, but those who do will get answers to questions like, "which version of SDSU will show up -- the one that nearly beat Oregon State and Fresno State, the one that did beat Boise State, or the one that got rocked by Eastern Illinois and UNLV?" or, "how good is Khalil Mack?" or, "would we even be able to see the Buffalo players in blue, or would their uniforms blend into the blue turf?" (Sadly, the Aztecs are the home team.)

If you're a bowl-lover, that's more than enough.

After taking requisite lickings at the hands of Ohio State (40-20) and Baylor (70-13), Buffalo stumbled to a 26-23 overtime win over a solid Stony Brook squad, then got hot.

The Bulls whipped UConn by 29 points and won their first six conference games by an average score of 37-9. They fell, 51-41, at Toledo but still had a chance to win the division crown before falling at home (well, in the Buffalo Bills' stadium), 24-7, to Bowling Green.

SDSU's season also began with whippings, but only one made any sense. Ohio State beat the Aztecs by 35, but sudden FCS power Eastern Illinois also whipped SDSU, 40-19.

After a bye week and a quarterback change, however, SDSU rallied. They had Oregon State all but beaten before a fluky, crushing pick-six sent them to 0-3. They've won seven of nine since. The wins have been in no way sound beatings -- average score of SDSU's wins: 34-27 -- but they've been wins, and they were enough to advance SDSU to its fourth consecutive bowl appearance.

Bowl appearances before this streak began in 2010: four.

The Bulls will probably win the field-position battle. Devin Campbell is a tremendous kick returner (if there are indeed kickoffs to return), the UB offense is at least pretty good at generating a first down or two before punting, and if there is going to be a big sack or a stop behind the line of scrimmage, Buffalo is probably going to be the one making it.

Buffalo has racked up 36 sacks and 85 tackles for loss, and only 10.5 and 19 of them, respectively, have come from All-American outside linebacker Khalil Mack. Seven other Bulls have logged at least five tackles for loss, including outside linebacker Adam Redden and strong safety Okoye Houston. Buffalo's defense is good at run stops and great at pressuring the quarterback. If one team is going to flip the field a couple of times, it will be the Bulls.

Generally speaking, Buffalo's defense is pretty good. SDSU's offense is not. The Aztecs are occasionally able to rip off some explosive scores -- running backs Adam Muema (a junior) and Donnell Pumphrey (freshman) each have runs of at least 57 yards, and three Aztec receivers (Ezell Ruffin, Colin Lockett, and Tim Vizzi) have a catch of at least 60 yards.

But down for down, SDSU's offense just doesn't have a lot going for it, especially at the line of scrimmage. Junior (and former walk-on) Quinn Kaehler is asked to make a little too much chicken salad, and while he has his moments (60 percent completion rate, 17 touchdowns to nine interceptions, and infinitely more success than Adam Dingwell, who began the season as the starter), this just isn't a very good offense. This line will have its hands full with Buffalo's 3-4 front. 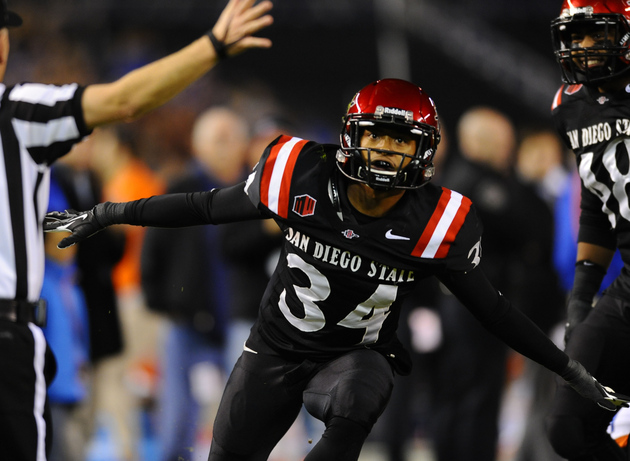 Generally speaking, SDSU's defense is pretty good. Buffalo's offense is not. As bad as SDSU's offensive line has been this year, the Aztecs' defensive line has been equally strong. SDSU's defense ranks 20th in Rushing S&P+ and 26th in Adj. Line Yards, and while Buffalo's all-MAC running back Branden Oliver is sound and powerful, it would be surprising to see him do too much against SDSU.

Quarterback Joe Licata might be forced to make plays in the downfield passing game, and that's not really a strong suit for this offense. A key battle here could be Buffalo receiver Alex Neutz (95 targets, 58 catches, 947 yards, 11 TD) against, presumably, SDSU corner J.J. Whittaker (3 INT, 11 PBU). If Neutz has a good day and Buffalo indeed wins the field-position battle, that might be too much for SDSU to overcome.

If there's a trend, it might be in SDSU's favor. In its last two games against competent offenses (Toledo, BGSU), Buffalo allowed 1,041 yards (7.2 per play) and 75 points. Meanwhile, since replacing Dingwell with Kaehler in the starting lineup, SDSU has averaged a reasonably respectable 5.9 yards per play and 31.2 points per game. Granted, a lot of this came against poor defenses, but SDSU's offense has been competent, at the very least.

The numbers favor both defenses here, but if one O has a surprisingly strong performance, I'm thinking it's more likely SDSU's.

This is a last hurrah of sorts for Buffalo. Most of the team's stars -- Mack, Oliver, Neutz, Houston -- are seniors; as I mentioned in Buffalo's season preview, this was a really seasoned, experienced team, and the program will likely take at least a brief step backwards regardless of the outcome in Boise.

Meanwhile, the only way this game impacts expectations for SDSU in 2014 is if the offense has a great game. Seven of SDSU's projected offensive starters are underclassmen, including Muema and Ruffin, but six defensive starters are seniors. Young defenders like corner Damontae Kazee and tackle Alex Barrett could become stars in the future, but it's been safe to assume that head coach Rocky Long will field a solid defense for a while. It's the offense where questions have existed for a couple of years now.

Again, if there's a breakout performance by one of the offenses, it will probably come from SDSU's, but because of field position and the propensity for making big plays in the backfield, Buffalo is the safer bet here. Get a good look at Khalil Mack before you see him shaking Roger Goodell's hand next April.