Share All sharing options for: The big 2013 New Orleans Bowl breakdown: Defenses should rule the 'Dome

We all have our specific holiday traditions. For those who celebrate Christmas, perhaps it's a trip to an aunt's house on Christmas Eve or the grandparents' on Christmas day. Perhaps there is a series of stops over three days. Perhaps there are no stops at all.

UL Lafayette fans have, in recent years, developed a new tradition: drive to New Orleans the Saturday before Christmas. For the third straight year, the Ragin' Cajuns will participate in the R+L Carriers New Orleans Bowl, and they have once again sold out their allotment of tickets. The Superdome was the site of their first (a thrilling, last-second, 32-30 triumph over San Diego State) and second (a comfortable-in-comparison 43-34 win over East Carolina) bowl victories in 2011 and 2012, and now, the Cajuns will not only attempt to go for three straight on Saturday … they'll do so against an in-state rival, the Tulane Green Wave. Mark Hudspeth has been in charge in Lafayette for three years and has won 26 games; previous coach Rickey Bustle won 25 in his final five seasons.

Meanwhile, the last time Tulane won a combined seven games in two seasons was 2009-10, when the Wave went 7-17. But in just his second year in charge, Curtis Johnson has engineered a 7-5 campaign, powered by a legitimately strong, top-40 defense.

The best bowls are either intense or local (and therefore well-attended). The 2013 New Orleans Bowl should be both.

Sprint out ahead, then hold on for dear life.

Powered by tight wins over North Texas and East Carolina (wins that got more impressive as the season unfolded), Tulane began the season 6-2 before a lack of offense caught up to the Green Wave. They lost three of four down the stretch (average score of those losses: 20-12) and faltered in the C-USA West division race, but the disappointment of that has to pale in comparison to the thrill of bowl eligibility. This is only Tulane's second bowl appearance since the 12-0 campaign of 1998, and it's in the Green Wave's home stadium.

(Well, sort of. Tulane moves out of the Superdome and into a cool, on-campus facility next season.)

I set the bar pretty high for UL Lafayette in my offseason preview ("The Cajuns will beat either Arkansas or Kansas State in 2013"), and while they both failed to meet my expectations and faltered late with losses to ULM and South Alabama, the Cajuns did still win the eight games in the middle and take home the Sun Belt title.

Mark Hudspeth has raised the bar in Lafayette, and that is never more clear than when talking about a disappointing 8-4 season.

Tulane's defensive line is legitimately great. The Green Wave's run defense in 2012 was all-or-nothing, making a lot of aggressive plays but getting carved up by solid run blocking. There are still occasional holes to be found, but let's just say there's a lot more "all" and less "nothing."

Senior tackle Julius Warmsley has 15.5 tackles for loss, and sophomore end Royce LaFrance has added another 10. Giant LSU transfer Chris Davenport has added 334 pounds of heft to the nose tackle position, and the line as a whole can hold its own against just about anybody's offensive line.

You will be hard-pressed to find a more successfully aggressive defense than Tulane's -- the Green Wave are third in the country in tackles for loss and first in passes defensed -- and it all starts up front. If the Cajun offensive line cannot carve out any advantages, it might not matter how well the Ragin' skill-position players play. Meanwhile, Tulane could create even more havoc if UL quarterback Terrance Broadway isn't cleared after suffering a broken arm late in the season. He was lost late in the upset loss to ULM, and the Cajuns scored only eight points against South Alabama in his absence. Redshirt freshmen Brooks Haack and Jalen Nixon are in line for playing time in Broadway's absence, and there's quite a bit of a drop-off there.

The Tulane offense might be able to grind out some points. It is difficult to find advantages for either offense, but while the Cajuns' defense is strong at snuffing out big plays, you can dink and dunk against it. And that's basically all Tulane can do on offense anyway.

Tailback Orleans Darkwa and fullback Rob Kelley combine for about 4.5 yards per carry on 22 carries per game, and quarterback Nick Montana averages just 10.8 yards per completion (with a rather ghastly 53 percent completion rate). Between three-and-outs and solid special teams, Tulane can usually set itself up with a couple of easy scoring drives in a given game. If it can't, the offense will need to put together eight to 10 straight error-free plays (with short gains) to score. 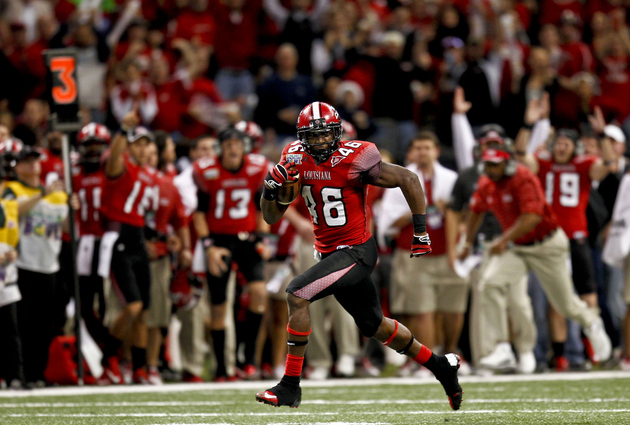 The Cajuns can match Tulane's big plays. Again, Tulane's defense is fun and aggressive, but UL Lafayette is not lacking in its own big-play ability. The Cajun pass rush isn't that great, but run stuffs could lead to a lot of Tulane second-and-longs.

And if an offense is going to break a big gain, it will probably be the Cajuns', at least with Broadway. Receiver Jamal Robinson has caught 50 of 80 passes for 812 yards, and freshman running back Elijah McGuire is a home run threat, averaging 8.9 yards per carry and 19.3 yards per catch. (Starting back Alonzo Harris is 216 pounds and more of a between-the-tackles grinder.) The Cajuns' offense might not find a ton of big-play opportunities, but when they get one, they could take it a long way.

Again, Tulane's offense isn't very good. If the Cajuns can hold their own in the field-position game and avoid giving the Green Wave easy scoring opportunities, they could pretty easily end up with the upper hand.

Linebackers Justin Anderson and Dominique Tovell have combined for 22 tackles for loss, mostly against the run, and as evidenced by a No. 29 ranking in Stuff Rate, the Cajuns are good at making plays in the backfield. If they can force Nick Montana into plenty of second-and-longs, he will eventually make a mistake. The UL Lafayette defense isn't as strong as Tulane's, but that's alright -- the Tulane offense isn't as strong as the Cajuns' either.

While Tulane's defense does have some important seniors -- Strozier, Sullen, Warmsley, Davenport -- there is enough underclassman talent here that a lovely bowl performance, combined with an experienced 2014 offense, could make the Green Wave a popular pick near the top of the C-USA West American next year.

Meanwhile, two hours west of New Orleans, maybe next year is the Year of the Cajun? Maybe I jumped the gun? Of UL Lafayette's projected starters, only two on offense and two on defense are seniors. Broadway will still somehow have eligibility left, McGuire could further come into his own, and a young, sketchy defense will be a lot more seasoned.

The Cajuns were the class of the Sun Belt before Broadway went down, and they will probably be expected to be the same next year no matter what happens on Saturday night, especially since it appears so far (KNOCK ON WOOD) that they might again avoid losing Hudspeth to the FBS coaching carousel. It might be a little early to make that assumption since we don't know how the ripple effect of the Texas vacancy could affect things, but Hud has not been a subject of many rumors yet.

Tulane gets the nod here because its defensive advantages are greater than UL Lafayette's, and that barely even takes into account the potential absence of Terrance Broadway.

Neither of these teams finished the season particularly strong, but after a couple of weeks to regroup, and in front of what should be a pretty fun crowd, they could put on a pretty fun show as the finale to the first day of bowl season, at least if Broadway goes. His absence would be a missed opportunity of sorts, for both the Cajuns and the viewing audience.