The Bison continued their quest from a third-straight national title as they blew out New Hampshire, 52-14. They'll face Eastern Washington or Towson for the national title next week.

For the third time in as many years, the North Dakota State Bison will be playing in the FCS National Championship Game. On Friday night, the back-to-back defending champions clinched a spot in the title game with a 52-14 win over New Hampshire.

The game was close for a quarter, with the Bison and Wildcats tied at 7-7 after the first 15 minutes. NDSU completely took over after that, though, scoring 45 consecutive points before UNH finally found the end zone once again with less than a minute remaining on the clock.

Brock Jensen was efficient all night long, completing 11 of 21 passes for 146 yards and three touchdowns. John Crockett led the Bison with 195 rushing yards on just 13 carries, while the team combined for 344 yards on the ground. New Hampshire was just unable to match the physicality of NDSU and wore down as the game moved along.

The FCS National Championship Game will be head coach Craig Bohl's last game at NDSU, as he's headed to Wyoming. The game feature the Bison going up against either Eastern Washington or Towson on Jan. 4 at 2 p.m. ET in Frisco, Texas. Those two teams play Saturday in the other semifinal. 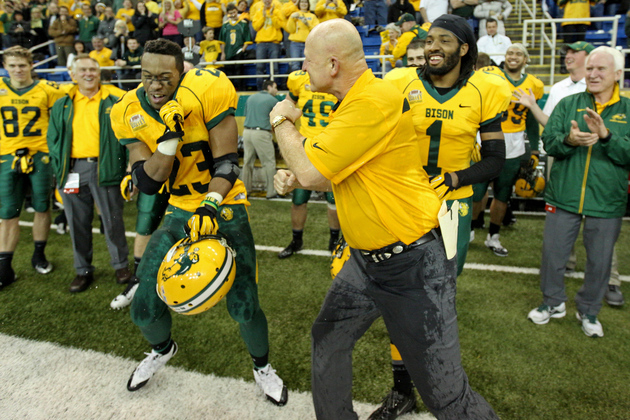 • Oregon’s new uniforms the most Oregon yet?