The Numerical: Bowl season's wacky opening Saturday, by the numbers

Share All sharing options for: The Numerical: Bowl season's wacky opening Saturday, by the numbers

Record attendance at Saturday night's R+L Carriers New Orleans Bowl. Local matters in minor bowls, and two local teams, Tulane and UL Lafayette, filled quite a bit of the Superdome. Those on hand saw an intense, dramatic, not very well-played game -- a 24-21 win for the Cajuns of Lafayette, their third straight New Orleans Bowl win -- but the latter doesn't necessarily matter if you have enough of the former. 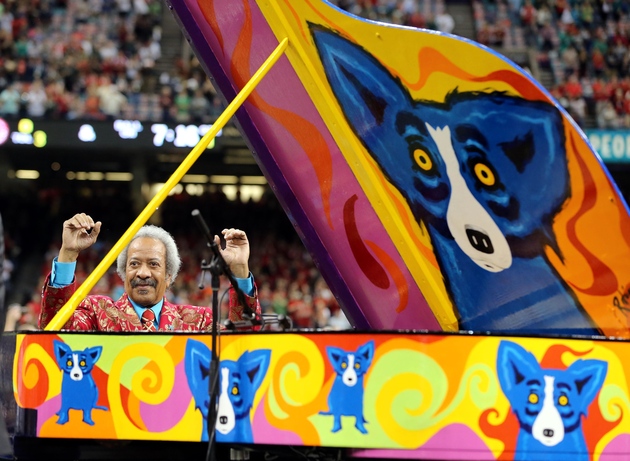 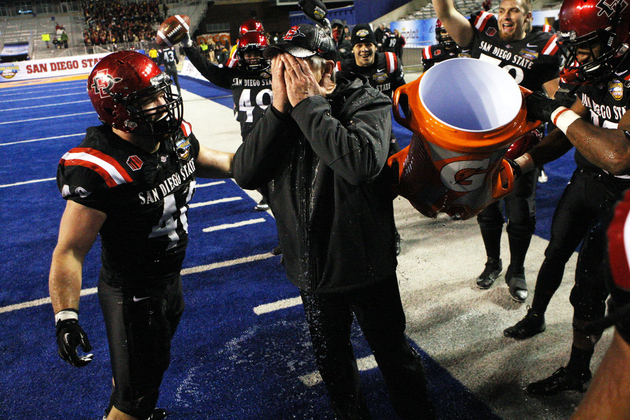 Percentage of San Diego State's drives that finished in Buffalo territory during a 49-24 Aztec win. SDSU went three-and-out once, in the second quarter. Otherwise, the Aztecs' 13 drives finished on the other side of the 50.

Average starting field position: SDSU 48, Buffalo 25. I talk sometimes about hidden yards, the yards a team can derive simply from starting in better shape than its opponent. Well, there were 27 possessions in this game (14 for SDSU, 13 for Buffalo); field position gave SDSU approximately 311 hidden yards (23 yards times 27/2). The Aztecs already outgained the Bulls by 151 yards, too.

So the primary question for this game was ... how did SDSU only win by 25?? The answer: The Aztecs missed a field goal, turned the ball over on downs twice, and lost a fumble, all inside Buffalo's 40.

Carries for both San Diego State's Adam Muema and Buffalo's Branden Oliver. Oliver, a workhorse senior who deserved a bowl reward as much as anybody on the UB team, gained 114 yards, a decent but unremarkable total. Muema, meanwhile, doubled him up with 229.

Muema had himself an odd junior season. He gained just 118 yards on 51 carries in September while working through an ankle injury, then gained 134 in 24 against Nevada. He erupted for 509 yards in 72 carries against New Mexico, San Diego State, and Hawaii, then finished the regular season with 57 yards on 36 carries against Boise State and UNLV. His line didn't always do him favors, and injuries slowed him down, but the final act of his season (career?) was an impressive one.

Thanks to a quick TD-INT-TD combination late in the second quarter, one that quickly turned a 14-10 SDSU lead into a 28-10 lead, Buffalo was forced to throw more than it probably preferred, and Buffalo quarterback Joe Licata just couldn't get going. He completed 13 of 30 passes, and while there is only one official dropped pass in the play-by-play ... yeah, there were more than that. Go-to receiver Alex Neutz caught a 51-yard pass at one point but hauled in just two of seven for 26 yards otherwise, and he had both an official drop and a pass that bounced off of his hands and was picked late in the first half.

And on the other side, Muema just kept right on running.

Garrett Grayson gained almost as many net yards (347) in 52 pass attempts as WSU's Connor Halliday gained in 63 (358), and with fewer negative plays. Plus, though all WSU runners gained 42 yards in 14 carries, CSU's Kapri Bibbs gained 169 in 27 carries while slowed by turf toe.

Washington State was lucky to be ahead to begin with.

The Rams outgained the Cougars by 195 yards, so while the game was defined mostly by the fumbles at the end (we'll get to that), make no mistake: Washington State was a little bit lucky to be ahead by a large margin to begin with. The right team probably won. 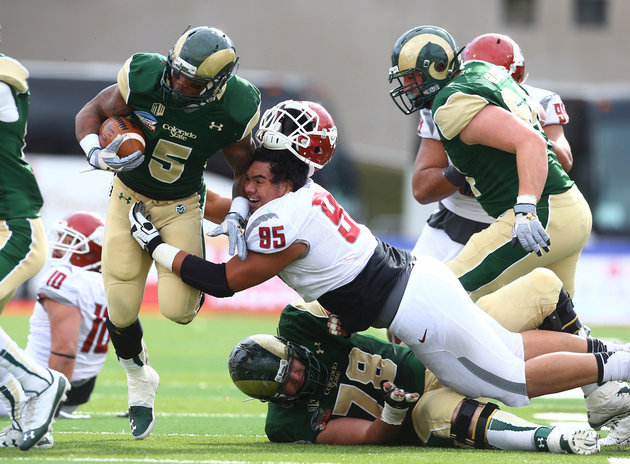 The Ragin' Cajuns leaped out to a three-touchdown lead thanks to a couple of early offensive bursts and a pick-six. Led by quarterback Terrance Broadway, who was returning from a broken arm suffered in late-November (I got really nervous anytime he got hit), the Cajuns gained 140 yards on their first 16 plays against an outstanding Tulane defense, and Corey Trim picked off Nick Montana on an ensuing Tulane scoring opportunity.

At this point, it looked like an outright blowout was underway, but Tulane's defense locked down. The Green Wave allowed only 185 yards on the Cajuns' final 53 snaps and ground back to tie the game, thanks to a series of unlikely, long completions by Tulane's backup quarterback, Devin Powell (10-for-21 for 223 yards).

But after the Cajuns took a 24-21 lead, Tulane's stud kicker, Cairo Santos, missed a 48-yarder at the buzzer, and the Cajuns won their ninth game of the year for the third straight season.

Yards per pass attempt for Derek Carr in his final game as a Fresno State Bulldog.

One of the fun (and maddening) aspects of bowl games is the myopic focus with which pretty big ESPN/ABC announcing crews will have on a single player, probably from a mid-major, and probably because of NFL Draft stock. Carr's has risen; he's been projected as a first-round pick of late, perhaps high in the first round, as you know if you watched five minutes of Saturday's ABC broadcast. But he was tasked with facing one of the nation's best pass defenses in the Las Vegas Bowl, and USC ate his lunch a little bit.

Done no favors by the game plan -- Fresno State attempted six carries all game ... SIX -- Carr dropped to pass 54 times and did manage to complete nine of 11 passes for 74 yards to Davante Adams. But passes to other players found their marks just 21 of 43 times for 143 yards. Quick passes to the sideline rarely found success, and USC clogged the passing lanes, giving Carr few decent looks downfield. Carr completed four of his first five passes for 40 yards but found almost nothing the rest of the game. He was never sacked, but he was constantly hurried into dumping the ball short, where USC's speedy defense swarmed. 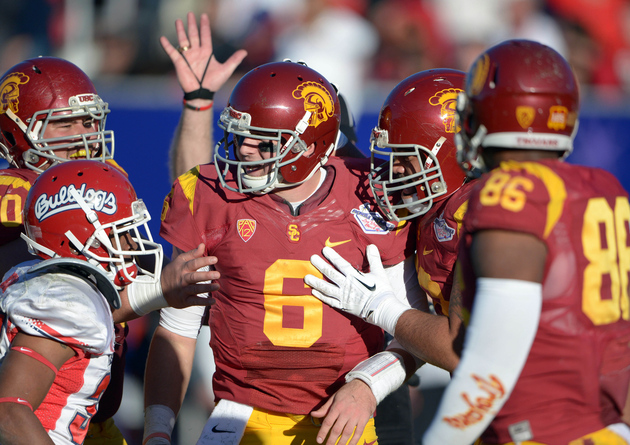 Meanwhile, USC's Cody Kessler had himself a day. Facing a banged-up Fresno secondary, Kessler completed 22 of 30 passes for 344 yards, four scores, and a pick, with just one sack. Marqise Lee and Nelson Agholor caught 12 of 17 passes for 212 yards and four touchdowns, and while the running game really wasn't very successful (Javorius Allen carried 26 times for 75 yards), it existed (Fresno State's did not), and it shrank the game for Carr and the Fresno offense.

Lane Kiffin was fired the night of September 28 following a 3-2 start and a blowout loss to Arizona State. But behind interim coach Ed Orgeron, the Trojans reeled off a 6-2 finish to the season; Orgeron left the team after he didn't get the full-time head coaching job -- that went to Washington coach Steve Sarkisian, who was in the Vegas press box on Saturday -- and offensive coordinator Clay Helton took over the interim reins.

I thought USC would roll if it showed up, but I wasn't sure it would show up, with all of the turnover on the sideline. Yeah, the Trojans showed. And it was fun.

It annoys me that USC isn't always this fun to watch.

Fumbles in consecutive touches by Washington State at the end of the New Mexico Bowl.

Up eight with a fresh set of downs and under three minutes to go, Wazzu could have killed most of the clock before punting back to CSU, but the aggressive Cougars wanted to get another first down and kill all of the clock. A Halliday keeper almost ended in disaster when Halliday was stripped by Shaquil Barrett after he hit the ground.

But with 1:51 left, on the very next snap, Barrett stripped short-yardage back Jeremiah Laufasa and recovered the fumble. CSU scored with 33 seconds left, then tied the game on a statue-of-liberty style two-point conversion, and Steven Michel forced a Teondray Caldwell fumble on the ensuing kickoff. Just seconds after tying the game, CSU won it with a 41-yard field goal by Jared Roberts.

It was the rare 11-0 run with 33 seconds left, something that would impress even Ohio State's basketball team. The Rams took home a deliciously wacky win to start bowl season.

Mascots in the world better, and more creepy, than the Famous Idaho Potato Bowl's.

He is a one-man welcoming committee for bowl season.