Ruffin McNeill's Pirates have been drastically better than Ohio in 2013, but as always with bowls, motivation could matter. Have the Pirates recovered from a disappointing, costly loss to Marshall? Is Ohio's November collapse over with?

It's that time of year, when the portions of the country that aren't Florida (and surrounding areas) learn that there is a restaurant chain called Beef 'O' Brady's.

It sells things like the OMG Burger, Nuclear Wings, the Santa Fe Burger (evidently a quesadilla with a hamburger patty in the middle), the Buffalo Chicken Salad, and the 23-ounce Sangria Rita. As with many American chains, some of the dishes sound like they belong on Guy Fieri's special Oakland Raiders spread, but because we're only told about Beef 'O' Brady's once a year, it becomes a novelty of sorts.

The B'O'B Bowl (Dec. 23, 2 p.m. ET, ESPN) has tie-ins with Conference USA and the AAC, which in theory could result in a happy, local matchup like USF vs. FAU at some point. But because of how things played out this year, there's nothing local about this battle between East Carolina (10.5 hours away by car) and Ohio (14 hours). Of course, that's nothing new for Ohio; during the Bobcats unprecedented run of five consecutive bowl games, they have been sent to New Orleans (2010), Boise (2011), and Shreveport (2012) after an initial jaunt to Detroit in 2009. Such is life for a midwestern mid-major.

Though the atmosphere at Tropicana Field might leave something to be desired, there are still story lines to follow and matchups to watch.

It was a season of almosts for Ruffin McNeill's 9-3 Pirates. They led Virginia Tech late in the third quarter before falling, 15-10, in Blacksburg. They surged back from 10 points down to take Tulane to overtime before eventually falling, 36-33. And with a division title within reach on the season's final weekned, they took a flurry of early shots from Marshall and cratered, 59-28.

The better you do, the more regrets you can have. Still, this was an outstanding step forward for McNeill's program overall, and they are a heavy favorite in this one.

This seemed to be a pretty typical Ohio season until an ugly November. Through eight games, the Bobcats were 6-2 and still involved in the MAC title race; the losses were disturbing for different reasons -- they were destroyed from the start in a 49-7 loss to Louisville, and they fell at home to a pretty iffy CMU team -- but there were still only two of them.

But then Ohio lost to Buffalo and BGSU by a combined 79-3 margin and dropped a 44-13 home decision to a pretty poor Kent State squad. That 7-5 is a frustrating step backwards tells us how far Frank Solich has taken this program ... but 7-5 with four blowout losses is indeed a frustrating step backwards. And while there have been injuries, Ohio hasn't suffered the same crippling set of injuries that provided cause for last November's collapse.

(Ohio rebounded from last year's collapse by pasting ULM in the Independence Bowl, by the way.)

ECU can pass, and Ohio can't really defend the pass. Call me crazy, but that might be a problem for the Bobcats. With 34 sacks, Ohio can rush the passer pretty well, attacking from a lot of different angles (especially from whichever angle end Tarell Basham takes).

But ECU's quick-strike passing game will negate some of that strength and potentially exacerbate the weakness. (Meanwhile, their minimal rushing attempts will also negate one of Ohio's biggest weaknesses: its propensity for getting pushed around up front.)

Quarterback Shane Carden has completed 71 percent of his passes at just 10.8 yards per completion; the ball leaves his hand quickly. But this version of the air raid (McNeill was Mike Leach's defensive coordinator at Texas Tech, and young offensive coordinator Lincoln Riley played for Leach at Texas Tech) has found its own personality and a lot of dink-and-dunk effectiveness. And junior inside receiver Justin Hardy has proven he can take a beating; his 135 targets are 13th-most in the country, and his 105 catches are fifth.

ECU has mastered the art of the pass-heavy, eight-play touchdown drive. That will give Ohio plenty of opportunities to make a stop, but the Bobcats haven't necessarily proven they'll take advantage of those opportunities.

Ohio really wants to run to set up play-action, but Ohio can't run. Again, a bit of a problem.

Ohio runs 62 percent of the time on standard downs but ranks just 118th in Rushing S&P+. The line has done running backs Beau Blankenship and Ryan Boykin (24 carries per game, 4.3 yards per carry) no favors, but they haven't shown much big-play ability on the rare chances they get in the open field.

Meanwhile, ECU is quite strong at preventing open-field opportunities. The Ohio play-action can be deadly -- Donte Foster, Chase Cochran and Matt Waters (out with a shoulder injury) have caught 58 of 82 passes (71%) for 1,071 yards (13.1 per target) on standard downs -- but it can only be so effective if ECU has to respect the run. 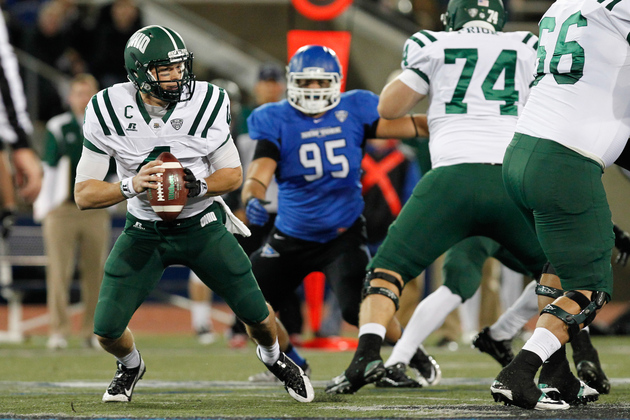 ECU can't really defend the pass either. It bears mentioning. The Ohio game plan here could be interesting; do you try to lean on the run early, as is both your custom and preference, and risk putting senior quarterback Tyler Tettleton in the same awkward situations in which he spent most of the season (throwing a disproportionate amount of time on passing downs)?

Or do you tweak the game plan a bit to account for your opponent's weaknesses? ECU tends to play relatively passive, reactive defense on standard downs before dialing up the pressure on passing downs (outside linebackers Derrell Johnson and Montese Overton: 13.5 sacks). If Tettleton can find Foster and company early in both the game and a given set of downs, it could do the run huge favors.

The Beef Bowl doesn't tend to stick to the plan. In four of five games, there has been at least a 14-point difference between the spread and the outcome. Two years ago, underdog Marshall beat favored FIU by 10 in the Golden Panthers' backyard, and in other cases, a team favored by a little won by a lot. This is a strange venue and a strange matchup; plus, ECU's last game was the disappointing, easy loss to Marshall.

Ohio is probably going to lose, but this game has decent sneak-attack potential.

Win or lose, this is a changing of the guard for Ohio. The Bobcats will have to replace Tettleton, Blankenship, and Boykin in the backfield, plus Foster and Waters in the receiving corps. The offensive line and most of the defense are pretty young, but the narrative from this game, win or lose, will be whether Ohio sent its stalwarts, major contributors to Ohio's current bowl streak, out as winners. (They probably won't.)

Meanwhile, a big win could do wonders for ECU's expectations. The Pirates will have to replace quite a few defensive pieces, including Johnson, two other starting linebackers, corner Adonis Armstrong (12 passes defensed), and their top three safeties. But most of the offense will return, including Carden, Hardy, No. 2 passing target (and freshman) Isaiah Jones, and three starters on the line.

ECU almost made the C-USA title game this year, and with a lovely win (or perhaps even with a loss) will be expected to seriously contend in its new conference (the American) next year.

ECU has played like a legitimate top-40 team this season, but we'll see if there's any lingering disappointment from the season-ending egg against Marshall. If both teams bring their respective A-games, ECU should cruise.

But if the Pirates falter a bit, an Ohio squad motivated by (potentially generic) things like November embarrassment and the desire to send Tettleton and company out on top could capitalize. I certainly didn't see Ohio's whipping of ULM coming last year.