Boise State and Oregon State have been evenly matched overall. And unlike a lot of pre-Christmas bowls, it appears the offenses hold most of the advantages. Then again, they almost always do in the Hawaii Bowl (Dec. 24, 8 p.m. ET, ESPN).

If you expect to get attention playing football on Christmas Eve, you better entertain. For much of its recent history, the Hawaii Bowl has absolutely done that. We got a brawl in 2003, a Chris Johnson coming-out party in 2007, and a stunning, "motivation and individual matchups matter" upset in 2012.

Plus, more often than not, we get points. A lot of them. The winner has scored at least 40 points in nine of 10 Hawaii Bowls (the exception: the dreadful 24-17 Southern Miss win over Nevada about which we will never speak again; it felt like 3-0), and in five of those nine, the loser also scored at least 35.

On paper, we should get both an even battle, and a lot of points, when Boise State and Oregon kick off on Tuesday night. Got a problem with that? Of course you don't.

The Broncos will try to get to nine wins for the 12th straight year, with an interim coach.

Regardless, Boise State is in Hawaii thanks to losses to Washington, Fresno State, BYU, and San Diego State, and the Broncos are without head coach Chris Petersen because of a different kind of defeat at the hands of Washington. Former Petersen assistant Bryan Harsin is ready to take over, but first the Broncos will try to get to nine wins for the 12th straight year, with interim coach Bob Gregory.

Boise State's season was eventful in a lot of ways, but Oregon State's was just odd.

Start with a loss to (FCS semifinalist) Eastern Washington. Then win six straight games, four on the road. Then lose five in a row, three at home. Lay eggs against unranked USC and Washington teams at home (combined score: 100-41) but show well against Stanford (a 20-12 loss) at home and Oregon (36-35) on the road.

Mike Riley's Beavers have been all over the map in a way that makes their No. 50 F/+ ranking seem inadequate -- they were simultaneously a top-30 and bottom-50 team. Good luck figuring out what they'll do in this one.

The Broncos are balanced. As you see in the rankings above, Oregon State is quite a bit better against the pass than the run (despite what Eastern Washington did to the Beavers in the season opener). But while the Broncos pass plenty, they strive for balance and attempt 44 rushes per game. They aren't amazing at it, mind you, but they should be good enough at it to find success against a porous Oregon State front that ranks 89th in Rushing S&P+ and 92nd in Adj. Line Yards.

You cannot dink-and-dunk against Oregon State; you have to gash them. But to the extent that Boise State is successful running the ball, the yards often come in large swaths. When he's holding onto the ball, Jay Ajayi is rather explosive, averaging 5.9 yards per carry and 5.8 highlight yards per opportunity. That whole "holding onto the ball" thing, however, has been an issue at times. He's important in this game, not only because he's a big-play threat, but also because since backup Aaron Baltazar tore his ACL (and subsequently announced his transfer), Ajayi hasn't really had a backup.

A good game from Ajayi could open things up for a passing game (led by quarterback Grant Hedrick, who took over when Joe Southwick got hurt in October and will do so again with Southwick suspended) that is much more about efficiency than explosiveness -- Matt Miller, Shane Williams-Rhodes, and Kirby Moore have combined to catch an incredible 84 percent of their passes but have averaged just 10.1 yards per catch. A big play is probably coming from either Ajayi or receiver Geraldo Boldewijn (56 targets, 37 catches, 510 yards).

Boise State owns special teams. In the F/+ rankings, BSU and OSU are nearly identical when it comes to offense and defense, but the Broncos hold a significant advantage in the special teams department, which gives them the overall edge.

Now, special teams only randomly rears its head, but if it does, it will probably favor BSU; kick returner Bryan Douglas is averaging 36.6 yards per return (in only eight returns), Shane Williams-Rhodes is averaging 14.6 yards per punt return, nearly half of Dan Goodale's kickoffs are touchbacks, over half of Trevor Harman's punts are fair caught, and Goodale has made 13 of 14 field goals under 40 yards. If only Boise State had this special teams unit in 2010 ...

Behind schedule? No worries. As it was in the heyday of the Kellen Moore years, Boise State's defensive line is rock-solid, especially against the run. Oregon State's running game has been incredibly inconsistent (and in a lot of cases, nonexistent -- OSU has some of the lowest run percentages in the country), and the Broncos have found a little bit of success with a combination of stout run defense and conservative pass defense.

It's quite difficult to score on explosive drives against BSU for this reason; the problem is that it's quite easy to move five yards at a time down the field against this unit. Boise State is third in preventing Explosive Drives and 121st in Methodical Drives. That's quite the contrast.

There's not enough overall play-making talent on this Boise State defense to take too many risks, and Oregon State will be more than happy to find eight yards on third-and-8. And with the combination of Biletnikoff Award winner Brandin Cooks and Richard Mullaney, the Beavers are one missed tackle away from a big gain; this duo caught 61 of 90 passes on passing downs for 1,002 yards.

Oregon State seems happy to stretch you horizontally if you prevent the vertical. Boise State can only prevent the latter, not the former.

Oregon State has a coach, and Boise State does not. Nothing against Bob Gregory, but leadership is often difficult for a place-holder. It could mean that the Broncos throw caution to the wind and unleash Trick Play Hell on Oregon State, but quite often a team in this situation can fold over the course of 60 minutes. 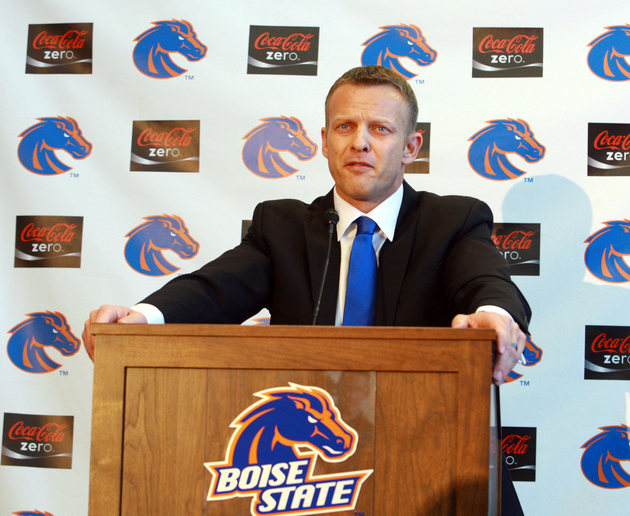 It's truly the end of an era in Boise. Not only is Chris Petersen gone after an amazing eight seasons, but the offense will be starting from scratch, relatively speaking. Southwick is a senior, as are Moore, Boldewijn, tight end Gabe Linehan, and five of 10 offensive linemen on the two-deep. Ajayi will return, as will most of the defense (of the 27 defensive players on the depth chart, three are seniors and eight are freshmen or redshirt freshmen), but it's fair to assume that Boise State won't get nearly the benefit of the doubt with a new coach, at least not for a while.

For Oregon State, 2014 expectations won't be dictated as much by this game as they are by who does or doesn't go pro. Cooks is small for the NFL (5'10, 186), but he's fast and might not have a ton more to prove at the college level. Defensive end Scott Crichton, meanwhile, has decent pro size (6'3, 265) and outstanding stats: 33.5 tackles for loss and 15.5 sacks in two years. If they return for their respective senior seasons, the Beavers could boast as many as 18 returning starters in 2014. That nearly guarantees improvement. Without Cooks and Crichton, though? Hard to say.

So no, we probably won't be overreacting to this one, one way or the other.

Because of special teams, the stats like Boise State in this one, but because of both the coaching situation and the flaky nature of special teams as a whole, I struggle with that. At the same time, however, Oregon State has given you no reason to feel confident in a pick either way. Between Trick Play Hell, the Beavers' general bipolarity, and general Hawaii Bowl shenanigans, this is one to watch whether you think you know what's going to happen or not.