Freshmen come up big for Pittsburgh in Detroit, and the Jordan Lynch Story has a pretty underwhelming ending in San Diego. Presenting the best stats from college football's Boxing Day.

Length, in seconds, of the drive that put away the Poinsettia Bowl. Utah State's offense, so limited in quarterback Chuckie Keeton's absence, had tested the stout USU defense all night. The Aggies had limited NIU to a touchdown and two missed field goal attempts, but the offense had produced just 13 points and consecutive turnovers. Utah State was clinging to a 13-7 lead.

With 11:33 left in the game, however, the offense did its job. Against an increasingly demoralized NIU defense, the Aggies went 80 yards in 16 plays, converting three third downs, throwing only two passes, and scoring the clinching touchdown with 4:14 remaining.

For the game, true freshman quarterback Darrell Garretson was predictably shaky -- 17-for-28, 121 yards, one touchdown, two interceptions, two sacks (3.7 yards per attempt) -- so the running game had to do basically all the work. There were droughts, but the duo of Joey DeMartino and Robert Marshall did enough, especially on this drive. For the game, they carried 29 times for 183 yards (143 from DeMartino); on this drive, they touched the ball 15 times on 16 plays.

NIU would respond with a touchdown of its own, but the Huskies couldn't recover the onside kick, and that was that. After attending five bowls in about 100 years, the Aggies have not only attended three in a row, they've now won two in a row. And they did so without their breakthrough quarterback.

Percentage of Pitt's yards accounted for by freshmen in the Panthers' 30-27 win over Bowling Green in the Pizza Bowl. James Conner rushed for 229 yards on 26 carries, Tyler Boyd caught eight of 12 passes for 173 yards, quarterback Chad Voytik rushed twice for 24 yards (he also completed five of nine passes for 108 after subbing in for injured starter Tom Savage), Chris Wuestner caught a pass for 13 yards, and fullback Jaymar Parrish carried once for two yards. Senior receiver Devin Street was out, and running back Isaac Bennett was ineffective (six touches, eight yards), so Paul Chryst's Panthers went young, and it worked.

Bowling Green at no point had an answer for Conner, who had carried more than 10 times in a game just once since September and averaged just 3.7 yards per carry in that span. The Falcons seemed capable of matching Pitt's speed for the most part (Tyler Boyd aside, anyway) but just couldn't bring down Conner, a 230-pounder from Erie.

(For grins, Conner came in late as a defensive end and drew a holding penalty.)

Conner softened the Falcons up, and Boyd blew by them. He caught a 46-yard pass from Savage to set up a field goal in the second quarter, then returned a punt 54 yards for a score a few minutes later. And after a quiet third quarter, he caught a 62-yard bomb from Voytik to set up a go-ahead touchdown early in the fourth.

Chryst is now 13-13 as Pitt's head coach, still attempting to insert stability after a ridiculous series of coaching changes at the turn of the decade. While we don't know yet about the depth of his recruiting classes, we know a little bit about the star power. Boyd was a four-star prospect from Clairton (the No. 103 player in the 2013 class according to Rivals.com) who chose the Panthers over offers from most of the Midwest and Northeast, while Conner was a high three-star end with mostly MAC offers (including one from BGSU). Five-star tackle Dorian Johnson started two games as well. Plus, three-star linebacker Matt Galambos recorded nearly 40 tackles in 2013, three-star tight end Scott Orndoff caught a couple of touchdown passes, and three-star defensive end Shakir Soto had four tackles for loss, including a sack against Bowling Green.

It might not be until 2015 when this class leads the way for a truly strong Pitt team, but one has to like the impact it had, both in 2013 and on Thursday evening.

Yards lost by Bowling Green in seven sacks against Pitt. Quarterback Matt Johnson completed 20 of 32 pass for 272 yards and two scores and proved effective on the run, throwing some solid rollout passes and carrying four times for 24 yards.

But two things converged against him in Detroit; first, BGSU was paying so much attention to all-world defensive end Aaron Donald that the Falcons ceded one-on-one (or none-on-one) blocking to other pass-rushers. Second, Johnson waited WAAAAAY too long to throw the ball at times. His per-pass average of 8.5 yards was relatively impressive and aggressive. His per-attempt average, including sacks, was just 5.6. For every three passes he completed, he was brought down in the backfield once. That doesn't usually work out very well.

Consider the Pizza Bowl Exhibit 1,148 for why counting sacks as rushing yards is silly. A quick glance at the stats -- Bowling Green passed for 279 yards but rushed for only 10! -- would completely miss the point. Pitt's run defense was quite good (BGSU's Travis Green and Fred Coppet carried 23 times for 41 yards), but not "10 yards" good. Meanwhile, assigning 279 yards to Pitt's pass defense is overdoing it. Regardless, Pitt's offensive line won most of its battles, and Pitt's defensive line won almost all of its battles, and the Panthers have a 2013 Pizza Bowl trophy to show for their efforts. 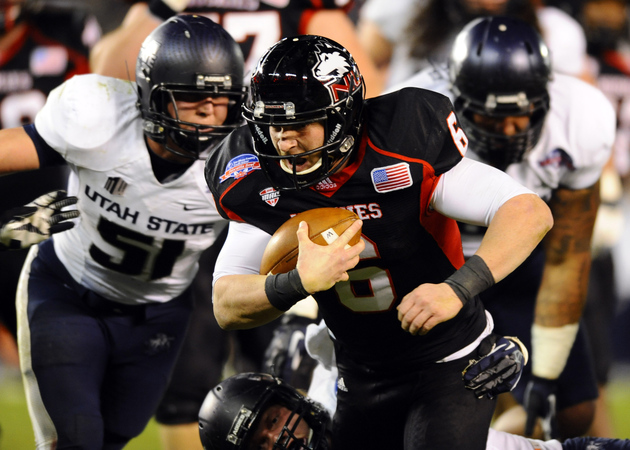 Net rushing yards, including sacks, for NIU quarterback Jordan Lynch in his final college game. With a line offering him no holes and a receiving corps offering him few easy passes, Lynch was unable to make up the difference against the awesome USU defense. He completed 20 of 35 passes, but for only 216 yards. His final pass was a touchdown, but he was picked off once and sacked twice. His top target in this game, Juwan Brescacin, caught just three of 10 passes for 30 yards. Lynch averaged 5.5 yards per pass attempt and carried 16 times for just 52 yards.

Lynch won 24 of his first 26 starts for NIU, but in his final two games, both losses, the offense was mostly shut down, scoring just 41 combined points after averaging 43 per game in the first 12 contests. It is a bitter way for Lynch's career to end, especially considering the extra scrutiny he and his team received in their attempt at a second straight BCS bowl game. (Florida State fans are still mocking NIU, which is both bullying and a little bit sociopathic at this point.)

Lynch pulled off some of the most fun, statistically improbable football you'll ever see.

Television announcers were required at all times to mention his blue-collar upbringing and mention his pro potential, which probably didn't help. I have no opinion on Lynch's pro prospects, but I do know that in two years, he pulled off some of the most fun, statistically improbable games you'll ever see in college football, mid-major or not.

He completed 43 of 66 passes for 482 yards, six touchdowns, and no picks against Iowa and Purdue, then he rushed for 316 yards in 32 carries against Central Michigan. He completed 26 of 32 passes for 345 yards and two scores against a solid Ball State team. He rushed for 321 yards two weeks later against Western Michigan. And in two years, he threw for 5,800 yards, rushed for 3,700, and took part in 89 touchdowns via pass or rush. (He also caught a touchdown pass this year.) That's awesome.

The ending wasn't very satisfying, but the Jordan Lynch Story was all sorts of entertaining. And since when do we watch action movies for the ending, anyway?