Ole Miss and Georgia Tech stagnated for different reasons in 2013, but both are young, rather evenly matched teams looking to build toward 2014. Which team holds the edge in Nashville (Dec. 30, 3:15 p.m. ET, ESPN)?

When you improve from 100th in the F/+ rankings to 26th in one year, as Ole Miss did in 2012, it is probably asking a bit much for the team to improve again the next year. The Rebels didn't -- Hugh Freeze's second squad fell to 35th with one game to play, though they did win one more game in the regular season -- but that's probably alright. Solidifying your gains with a young squad in Year 2 is nice. You can live with that.

Sometimes, however, stagnation is just stagnation.

Paul Johnson's Georgia Tech Yellow Jackets finished 8-5 and ranked 30th in the F/+ rankings in 2011, then went 7-7 and ranked 29th in 2012. This year: 7-5 and 31st. In his six seasons in Atlanta, the Ramblin' Wreck has ranked between 29th and 47th four times. Even when the Jackets won the ACC in 2009, they were just 34th. Johnson has crafted a reliably decent program -- a more high-powered Navy, basically -- with a consistent, top-25 offense and average-at-best D.

For a moment, it appeared setting the bar at same-as-last-year wasn't optimistic enough. Ole Miss began the 2013 season with a fun, nearly last-second win at Vanderbilt, then dominated Texas in the second half on the way to a 44-23 road win. The Rebels were ranked 21st when they headed to Tuscaloosa, and with Alabama's struggles against Texas A&M's spread, some were talking themselves into a potential upset bid.

It didn't happen, of course. Alabama shut out the Rebels, 25-0, and Auburn followed up with a 30-22 win that, at the time, seemed like a pretty discouraging result for Ole Miss. (Little did we know.)

Texas A&M then visited Oxford and delivered a tight, 41-38 victory to send the Rebs to 3-3. But as the season seemed to be falling apart a bit, Ole Miss upset LSU at home, then feasted on table scraps (Idaho, Arkansas, Troy), to move to 7-3. Late losses to Missouri (acceptable) and Mississippi State (less so) stained a streaky season, but the landing spot, Nashville, is a pretty decent one.

Georgia Tech's run to 7-5 was equally streaky. The Yellow Jackets began with a dominant 38-14 win at Duke, which would become more impressive as the season unfolded, and came back to take a tight win over North Carolina to move to 3-0.

Like Ole Miss, they then lost three in a row, albeit in increasingly disappointing fashion -- by seven points to Virginia Tech, by 15 points at Miami, by 18 points at BYU. They responded with solid showings against the conference's lesser lights, destroying Syracuse and beating Virginia and Pittsburgh by 10 and 11, respectively. But any division title ambitions were put to rest with a 55-31 loss at Clemson.

The Yellow Jackets finished the regular season with a come-from-ahead overtime loss to Georgia; it was the closest they had come to beating their in-state rival since their last series win in 2009, but considering Georgia was playing its backup quarterback, that only means so much.

The trickiness and effectiveness of Paul Johnson's option offense seems to assure that Tech doesn't lose to bad teams -- since 2009, only one team has beaten the Yellow Jackets and finished with fewer than six wins -- and their random domination of lesser teams (70-0 over Elon, 56-0 over Syracuse) tends to plump up their statistical rankings a bit. But the ability to beat many good teams has been lacking. They'll get an interesting opportunity in Nashville.

Dr. Bo will find a passing-downs cure. On standard downs, Ole Miss' offense is rather mediocre overall. The Rebels attempt balance, but the running game is inconsistent -- three different Rebel running backs have had stellar moments (Jeff Scott, Jaylen Walton, I'Tavius Mathers), but their open-field opportunities are sometimes limited -- and the passing game is relatively conservative.

But on passing downs, Ole Miss says, "Hey, Bo Wallace, go make a play." Ole Miss passes more frequently than almost anybody in the country on passing downs, and Wallace often comes up with big plays downfield, usually to Donte Moncrief, Ja-Mes Logan, or Vince Sanders. (For all his recruiting hype and freshman All-American status, Laquon Treadwell has basically been a glorified tight end this year.)

Georgia Tech's passing-downs defense is pretty simple: please get to the quarterback. The Yellow Jackets have a top-20 pass rush, thanks mostly to senior Jeremiah Attaochu (12 sacks, 15.5 tackles for loss), but if they don't bring down your quarterback, they're probably giving up a completion.

One of the keys to this game will be the field position battle. Neither team was very good at it in 2013, but both will have opportunities. Georgia Tech's special teams unit is superior to Ole Miss' overall, but if the Rebels can convert some passing downs and move the ball a bit even on failed drives, they'll have a chance to keep Georgia Tech pinned inside its own 30 on a majority of drives. Do that, force a couple of turnovers, and you're in excellent shape.

The Rebel D is disruptive up front, preventative in the back. Ole Miss is not without its deficiencies on defense, but the front and back lines of the Rebel defense are generally solid. The line holds up against run-blocking pretty well (though blocking in the flexbone is different than run-of-the-mill run blocking), and more importantly for this game, the Rebels are able to shoot into the backfield at times. Ole Miss has 59 non-sack tackles for loss -- 7.5 from linebacker Serderius Bryant, 5.5 from defensive end D.T. Shackelford, and 6.0 from freshman tackle Robert Nkemdiche.

You're probably not going to prevent Georgia Tech from establishing a rather solid success rate, but if you can randomly puncture the line, make a stop for a solid loss, and set up second-and-13 or third-and-nine situations, you're in control. Quarterback Vad Lee and the Tech offense are better on passing downs than the stereotype might suggest, but one still has to like Ole Miss' chances on passing downs, with safeties Cody Prewitt and Trae Elston (combined: 5.5 tackles for loss, six interceptions, 13 passes broken up) patrolling. 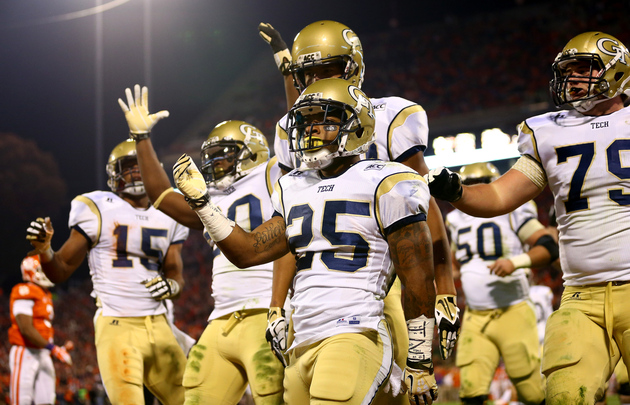 The Tech offense forces defensive patience. Ole Miss doesn't have a ton of that. If the Rebels can't make some plays behind the line, they tend to get pretty frustrated. Underclassmen litter the two-deep on defense, and you can tell sometimes. They rank just 82nd in stopping methodical drives, while Georgia Tech's offense ranks 25th in creating them.

Vad Lee and fullbacks (B-backs) David Sims and Zach Laskey average 32.3 carries for game at about 4.7 yards per carry. They are not explosive, but the Yellow Jackets will consistently pound out three to six yards per carry, then convert on third-and-one (Ole Miss' defense is 101st in Power Success Rate, by the way), until you focus on stopping them either between the tackles or on Lee's option keepers.

And when you do, you get gashed on the corner. A-backs Robert Godhigh, Dennis Andrews, B.J. Bostic and others only average eight or nine carries per game but get nearly 10 yards a pop when they get the ball. Godhigh is also a leading receiver; he's caught 21 of 37 passes for 420 yards, 11.4 per target.

Paul Johnson tends to have a pretty good read for when he has you on a string and how far he can push you before getting aggressive downfield. If the offensive line prevents penetration -- it usually does, though Ole Miss will test that unit -- the Ramblin' Wreck should be able to pound away quite well.

Dr. Bo takes sacks. Georgia Tech gives 'em. Again, Tech doesn't do a lot well on defense, but they do pin their ears back pretty successfully. They are fifth in the country in standard-downs sack rate, which could be useful when we talk about Ole Miss' success on passing downs. Technically third-and-six and third-and-12 are both passing downs, but if Georgia Tech forces more latter than former, the Yellow Jackets will have an advantage despite deficiencies in the secondary. But if Attaochu and players like sophomore nose tackle Adam Gotsis (five sacks) are able to get penetration, Wallace will obviously struggle to produce.

You can't go a quarter without announcers telling you how high Ole Miss coaches are on freshman left tackle Laremy Tunsil. He was dinged up late in the year, but he still held his own; he'll have his hands full against Attaochu and company, however. (And for that matter, Attaochu and company will have their hands full in run blocking.)

Ole Miss has quite a few seniors on the offensive line but has few elsewhere. Of the 51 names on the Rebels' bowl two-deep, nine are freshmen, 12 are sophomores, and 12 are juniors, and Hugh Freeze will be expected to further plump up the depth chart with redshirt freshmen and more true freshman next fall. The Rebels are on an upward trajectory, and that will be the case no matter what happens in Nashville.

For Georgia Tech, this game probably means a little more. The Yellow Jackets have stagnated for a few years, and while they have an even younger two-deep than the Rebels (12 freshmen, 13 sophomores, 14 juniors), they are suffering in the perceptions battle. A strong performance against Ole Miss, especially from a defense that features seven freshmen and eight sophomores in the rotation, would be a lovely statement. Tech isn't likely to garner more than a handful of top-25 votes even with a win, but it would still be a sign of progress.

Which defensive line is getting better penetration? That's going to be the story of the game. If Tech is harassing Wallace in the passing game, or if Ole Miss is disrupting the option game and forcing Lee to make decisions more quickly than he wants to, that will help to determine who has the overall advantage. Both defenses are both active and deficient in some areas, and both offenses can move the chains pretty well.

The numbers give Georgia Tech a slight advantage because of special teams, but this one is a virtual tossup.