Middle Tennessee is mediocre-to-decent across the board. Navy is either really good or really bad at most things. Which offense will find the most advantages in Monday's early Armed Forces Bowl (11:45 a.m. ET, ESPN)?

Two years ago, things were on the downside for two of the more successful coaches in the mid-major ranks. Navy's Ken Niumatalolo had gone 27-13 in his first three years as Navy's coach, but in Year 4 (Year 1 A.R., or After Ricky Dobbs) the Midshipmen had gone just 5-7, sinking to 73rd in the F/+ rankings.

Things were even worse in Murfreesboro. Rick Stockstill, engineer of the first three bowl bids in Middle Tennessee's history, had gone from 10-3 in 2009 to 2-10 in 2011, 114th in the F/+ rankings. Upon the departure of defensive coordinator Manny Diaz, Stockstill's defense had fallen apart, and an efficiency-based offense didn't have enough efficient weapons.

With talent at a premium, it was easy to see both of these programs continuing to wither a bit. Instead, they each won 16 games in two years. MTSU was passed over for a bowl bid at 8-4 in 2012, but not this time. One redemption story meets another one in Fort Worth on Monday.

Despite moving up to Conference USA, Stockstill's Blue Raiders replicated their 2012 record by improving further in the F/+ rankings.

They began the season 3-4 with four losses to eventual bowl teams (UNC, BYU, East Carolina, North Texas), two by one possession; the season began to turn around, however, with a crazy win over Marshall, the eventual C-USA East champions. MTSU took a 10-point lead late in the third quarter, but Marshall surged ahead, 49-45, with just 2:29 left. But with no time left on the clock, Blue Raider QB Logan Kilgore found Tavarres Jefferson over the middle in the end zone for the game-winning score.

The turnaround continued as a front-loaded schedule lightened up. MTSU sneaked by UAB, 24-21, then beat FIU, Southern Miss, and UTEP by an average score of 46-13.

Like fellow newcomers North Texas, FAU, and UTSA, MTSU held its own in its new conference (due in part, of course, to the fact that a lot of the conference's top teams had been pilfered by the AAC).

Thanks much to the exploits of sophomore quarterback Keenan Reynolds, Navy officially bounced back in 2013.

Yes, the Midshipmen went 8-5 in 2012, but they weren't very good, falling to 86th in the F/+ rankings. They were back to 66th in 2013, once again putting a top-30 offense on the field, one good enough to overcome a wretched defense and very nearly steal a couple more wins. The Middies upset Indiana in the season opener and managed to win tight games over Pitt and San Jose State, so it's not like they were unlucky; still, they fell at Toledo, 45-44, and lost to Notre Dame in South Bend, 38-34.

NOTE: The rankings below do not include Navy's win over Army on December 14.

Blue Raider weapons come in all shapes and sizes, from running backs Jordan Parker (6'1, 220) and Reggie Whatley (5'7, 167) to receivers Tavarres Jefferson (5'9, 206) and Terry Pettis (6'5, 221). But they will peck and poke as long as you let them. The Blue Raiders aren't explosive, but they are 38th in First Down Rate and 65th in Methodical Drives. They will move the chains, and they will stay patient. And Navy can't stop you from doing either one of those things; the Midshipmen rank 122nd and 125th, respectively, in those categories.

Navy tries to bend without breaking, but they break quite a bit. They have little disruptive presence in the backfield, especially in pass-rush situations (three Middies have 2.0 sacks, none have more), which means that Logan Kilgore will have time to distribute the ball as he chooses. His decision-making has improved through the years, and he should have an opportunity to play quite well as long as he remains patient. (It's easy to get impatient if the Navy offense is eating up clock against your defense.)

Nobody hacks at the ball like the Blue Raiders. Only nine teams forced more than 16 fumbles in 2013; MTSU forced 21. Turnovers have played a large role in MTSU's success this year -- the Blue Raiders were plus-12 for the season -- and they rather frequently pulled off the bend-don't-break routine because a well-time sack or strip. This is part of the plan; six different MTSU defenders forced at least two fumbles, and end Dearco Nolan forced three.

What has made Navy so effective under Reynolds is his command of the ball. Option teams are known for laying the ball on the ground a bit, but while Nebraska fumbled 31 times, Army 23, and Air Force 19, Navy laid the ball down only 12 times, 15th-fewest in the country. If Navy is controlling the ball, it's going to be difficult to win the turnover battle (the Middies don't exactly pass much, and Reynolds has thrown only two picks), but if MTSU can effectively hack the ball away a time or two, that could be a huge difference in a game in which offenses have the advantages on both sides.

If the Midshipmen don't fumble, they probably score. If I had to go down to "they force fumbles" to find a defensive advantage for MTSU, that probably tells you quite a bit. In the 14 categories above that pit Navy's offense against MTSU's defense, Navy holds the advantage in 10 of them and holds a rather significant advantage in eight. MTSU can hold its own against iffy passing games, but Navy barely passes. In the stats that count for this offense -- Rushing S&P+, First Down Rate, Methodical Drives, Adj. Line Yards, Opportunity Rate, Stuff Rate, etc. -- Navy dominates.

Granted, MTSU's last experience against a flexbone attack, a 49-28 destruction of Georgia Tech early in 2012, was encouraging, but that was 15 months ago. Hard to draw too much from that one.

Odds are good that Navy will do what Navy does: plod away with Reynolds and the fullbacks (Chris Swain, Quinton Singleton, Noah Copeland), then occasionally gash you with the slot backs (Darius Staten, Geoffrey Whiteside, DeBrandon Sanders, Marcus Thomas), either on the ground or through the air. And odds are good that it will work. 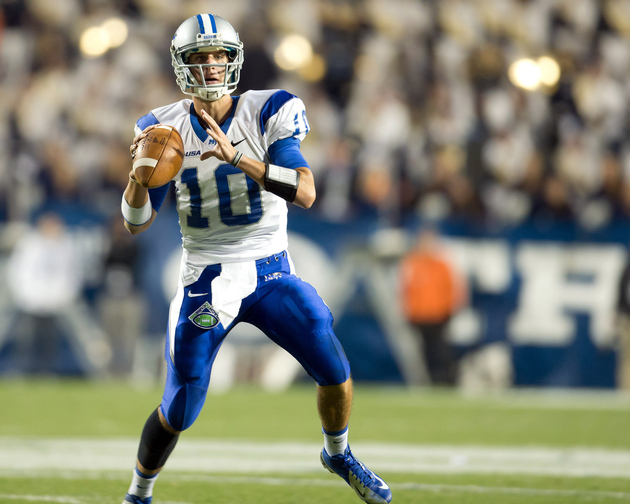 Navy feeds off of your impatience. I referenced it above. MTSU's offense holds most of the advantages, just like Navy's.

But Navy does a good job of limiting big plays and forcing you to remain patient. Kilgore and the Blue Raiders do a pretty good job of that, but when you're facing Navy for the first time, and the Middies rip off a couple of five- or seven-minute scoring drives, and you start to feel pressure to keep up, your anxiety gets the best of you, and someone like linebacker Chris Johnson or free safety Parrish Gaines steps in front of a pass. Again, Kilgore's decision-making has improved, but he's thrown 34 career interceptions, and Navy can bring out your worst tendencies if you're not careful.

Both of these teams were quite young this year, which makes their 8-4 campaigns rather encouraging. MTSU will have to find a new quarterback and go-to receiver to replace Kilgore and Jefferson, but they aren't irreplaceably good. MTSU went 6-2 in Conference USA this season and could be a threat again next year.

Meanwhile, Navy will bring back Reynolds and most of his flexbone mates (basically everybody but Staten and Thomas), and while there are about five defensive starters gone, what play-makers they have will return. And losing starters from a bad defense is never the end of the world.

Both of these teams are young and interesting, and if one wins in a blowout, that could bump it up a few spots on preseason lists.

Navy will define this game, for better or for worse. MTSU is slightly below average in most facets of the game, while Navy holds the biggest strengths and weaknesses. If MTSU is able to force a couple of turnovers, the Blue Raiders' mediocre offense should be good enough to move against a porous Navy defense. But Navy's offense is the strongest unit in the game, and the Midshipmen get the nod because of it.

Do you like points? If you do, watching this game probably isn't the worst way to start a Monday.