USC's hiring of Washington's Steve Sarkisian as its new head football coach seems to have had the exact opposite effect of the effect hirings are supposed to have.

Share All sharing options for: 'Like I just lost my father': USC players react to Steve Sarkisian replacing Ed Orgeron

We don't know if Steve Sarkisian will be a good coach at USC. This is football, and you can't predict it. Things you think are solid evaporate, and Duke, Auburn and Mizzou end up in conference championship games. And Sarkisian's taken a Washington program that was in dire, dire straits -- 0-12 the year before he got there -- and made them relevant, with three straight seven-win seasons.

However, we'll say this: we can't recall seeing a coaching hire met with such unabashed glee by fans of the teams it should hypothetically rile up and so little positive reaction from those around the team itself. Normally a hiring is met with excitement for a new era, but there doesn't seem to be any joy trickling out from Troy today (there was certainly joy, however, on the internet -- at least among non-USC fans).

Keep getting calls from Dan Weber and he says the mood around #USC is like a funeral.

(The Dan Weber mentioned is a fellow USC beat writer.)

As he was leaving Dan Weber asked Pat Haden "How's it going" and he responded, "I've had better days." #USC

THAT'S THE ATHLETIC DIRECTOR. THAT'S THE GUY WHO MADE THE HIRE.

#USC players filing out. No one taking. Somber mood at McKay pic.twitter.com/k5DPM4uTwQ

#USC Justin Davis saying "I'm good--it was..." And a thumbs down gesture

To be fair, the glum mood seems not to come from any pre-existing feelings about Sarkisian, but rather the resignation of Ed Orgeron, the wildly popular interim coach with the funny voice who decided to move on with his career after being passed over for the full-time job. Many of the players liked him, and the announcement that he would be going elsewhere, effective immediately, was a tough pill to swallow.

How hard will Sark's job be? Players openly crying after Orgeron's departure. #USC

#USC players were instructed to not comment on coaching situation. Some left meeting with visible tear marks.

It got worse when the players got to Twitter:

If you think Coach O was just a football coach then your missing 99% of what he was to us!!

Coach O was more then a coach, he was a father to us, and treated us like we were his own sons... Nothing but good things coming his way!

Obviously, some players had optimistic things. And obviously, the administration wanted to keep Orgeron as an assistant coach. But all this makes me wonder: Why not hire the guy everybody is absolutely crazy about?

(Note: this is not including the semi-breakdown suffered by an LA Daily News reporter.)

But their fans are excited about the move, right? Let's take a peek in the comments section at our USC blog, Conquest Chronicles: 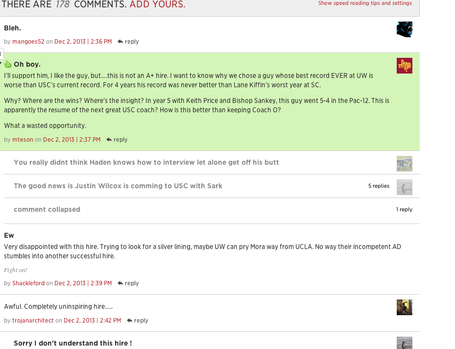 Now let's go across town, to see what's happening at Bruins Nation, to see how the Trojans' biggest rivals might feel about Sark's hiring: 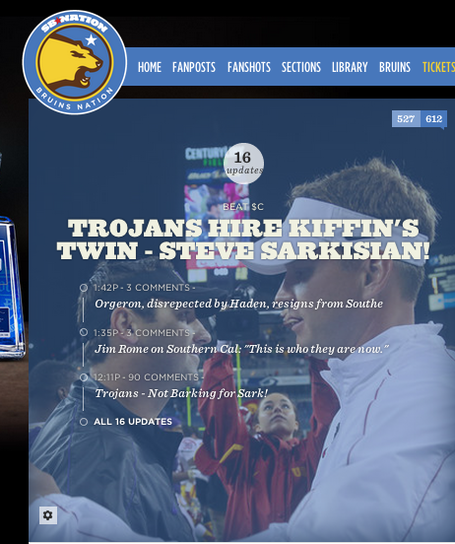 Yeah, they're pretty happy with things. It turns out many of The Other Guys are:

Pac 12 coaches having fun with me now. Looked at my phone and had a pic of a staff holding a bottle of champagne

Our Washington blog was understandably somewhat disappointed about being left by their current coach and a lot of his staff, but saw silver linings:

Husky fans: this is a no-lose situation. If he leaves, he left the cupboard loaded. If he stays then we all carry on.

The irony here is that UW could come out of this with a much better coach. Great facilities, stacked roster, great city. Attractive gig.

On the bright side, USC gets the continuity of hiring a coach who knows how to get embarrassed at ASU.

USC just made a ground into double play hire.

Again, we don't know what's going to happen, because opinions are often wrong, and even well-thought analysis is often wrong in college football. But hey, this is a pretty bad start, guys!