Arizona State and Texas Tech should put on a show in the Holiday Bowl. Here's how you can tune in and what you can expect.

The likelihood of points is high when the Arizona State Sun Devils take on the Texas Tech Red Raiders in the Holiday Bowl. Both teams averaged over 35 points per game this season, and we could very easily be in for another Holiday Bowl shootout.

The two teams can fill up a box score, but they finished the regular season in drastically different fashions. Arizona State fell short in the Pac-12 title game, but they won seven straight games before that to clinch the Pac-12 South. Texas Tech, meanwhile, started the season hot with seven straight wins, but they stumbled badly in the second half of the season with five consecutive losses against the meat of their Big 12 schedule.

One would expect the Sun Devils to have the upper hand in this matchup. They very well may, but at the very least, this game should provide quality entertainment for those who enjoy offense.

Rankings and records: Arizona State finished the season 10-3, and ranked 14th in the BCS standings. The Sun Devils won the Pac-12 South, but endured their second loss of the season at the hands of Stanford in the Pac-12 title game. Texas Tech began the season with seven straight wins, but they fell off and finished outside the top 25 and sixth in the Big 12 standings.

Vegas: Arizona State opened as a 13 point favorite, according to OddsShark.com. The over/under opened at 70.

Weather: It's San Diego, so it will probably be perfect.

Marion Grice: The senior running back is ASU's most dynamic threat, scoring 20 total touchdowns rushing and receiving this season. However, he's currently dealing with a leg injury, and is questionable for the game. If he can't go, Arizona State will need to lean heavily on other playmakers, most likely Jaelen Strong.

Will Sutton: The big man in the middle for Arizona State's defense is one of the best defensive tackles in the country. At 6'1, 305 pounds, he has the size to play inside but the speed to rush the passer. He tallied four sacks and 11.5 tackles for a loss this season, and allows for other pass rushers like Carl Bradford to work in one-on-one situations on the edge.

Jace Amaro: Amaro is right there with Eric Ebron and Austin Seferian-Jenkins for the title of best tight end in the country. He caught 98 passes for 1240 yards and seven touchdowns this year, and is Tech's best offensive weapon. The Red Raiders have some uncertainty at quarterback entering the bowl game, but regardless of who's taking the snaps, they'll be looking Amaro's way early and often. 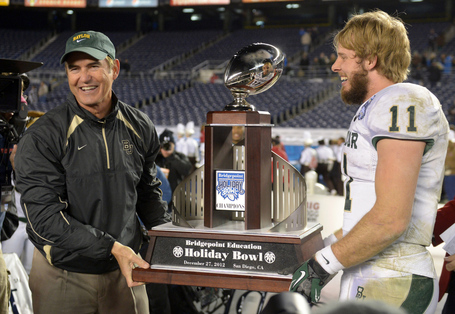 Program momentum: Texas Tech can take some of the sour taste out of their mouth with a win to end the season. It's been a tale of two seasons in Lubbock, but an exclamation point to end the season would be big for Kliff Kingsbury. For Arizona State, they have the chance to finish the season with 11 wins for the first time since 1996, which would be a pretty nice feather in Todd Graham's cap.

Online streaming: You can stream the game online on WatchESPN.

For more on the Sun Devils, check out House Of Sparky.

For more on the Red Raiders, head over to Viva The Matadors.