Boston College and Arizona will square off in the former Independence Bowl, and it may have the best individual matchup of the entire bowl calendar. Here's how to watch the game and what to expect.

The Arizona Wildcats and Boston College Eagles feature two of the best running backs in the country in Ka'Deem Carey and Andre Williams. They have both put up monster numbers this season, and for that they've been rewarded with a New Year's Eve in Shreveport, La., in the AdvoCare V100 Bowl.

Williams and Carey won't be on the field at the same time, but the thought of seeing the two try to outdo one another is one of the more tantalizing prospects of bowl season. Neither team is a world beater, but they've both shown signs that they can hang with anyone in the country. Arizona pulled the legs out from underneath Oregon, 42-16, in November, and BC was the only team that gave Florida State an actual game this year, a 48-34 loss at home in Chestnut Hill.

Rankings and records: Both teams finished the 2013 season at 7-5 and outside the top 25. This is the first matchup between these two schools, so history is very much on the line.

Vegas: The Wildcats opened as touchdown favorites, according to Odds Shark. The over/under opened at 57.

Andre Williams and Ka'Deem Carey: These two will garner the vast majority of the headlines, and for good reason. Williams and Carey are first and second, respectively, in rushing yards per game in 2013. Both players have more than 320 rushing attempts on the year, and Williams was able to crack the 2,000-yard barrier. They combined for 34 rushing touchdowns and 3,800 rushing yards, so you can probably guess how both teams run their offenses. Watching these two backs go head to head will be a treat.

That's it. Just them. Just sit back and enjoy the show.

This tremendous looking trophy: At least, this is the old Independence Bowl trophy. The AdvoCare V100 Bowl website didn't mention a trophy, so it could be different now. But look at it! The majesty! 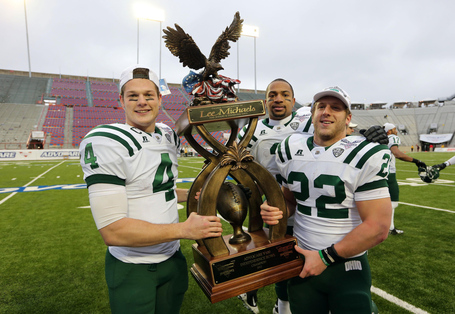 Program momentum: Rich Rodriguez can start off his tenure in the desert with two straight bowl wins. It may not be the biggest deal to some, but every little positive counts for the Wildcats, who need to keep pace with their in-state rivals. For Boston College, this is its first bowl game since 2010. Steve Addazio has the program trending positively, but a bowl game loss can throw a pallor over what should otherwise be a time of growth.

For more on the Wildcats, check out Arizona Desert Swarm.

For more on the Eagles, head over to BC Interruption.