Projecting Week 15 of the college football season and its likely impact on the national championship and BCS bowl races. Four teams remain in the running for the title ... okay, Alabama fans. Five.

As we expected a couple of months ago, there are five teams still eligible for a shot in the national title game heading into college football's Championship Week. But these probably aren't the names we had in mind.

Of course, that didn't happen. It never happens. Louisville tripped on a Friday night landmine against UCF, and then November did what November tends to do: destroy contenders left and right.

With just 15 games remaining in FBS' regular season (14 this week and Army-Navy next week), here's the BCS hierarchy:

And that's basically it. Maybe there's a scenario in which Oklahoma State destroys Oklahoma and sneaks ahead of Alabama in the BCS rankings, but it's unlikely enough (in my opinion) that I won't worry much about that, especially since Alabama's BCS odds from the No. 4 spot are minuscule anyway.

And yes, SEC and Auburn fans, Ohio State is, and should remain, ahead of anyone from the SEC. From Matt Hinton's BCS Realpolitik on Sunday at Football Study Hall:

True, the margin between Ohio State at No. 2 and Auburn at No. 3 is close (just .027 points on a 1.000 scale), and Mizzou is certain to surge from No. 5 if it carries the day in Atlanta. But the Buckeyes remain solidly ahead of both sets of Tigers in five of six computer polls (the Colley Matrix stands alone, ranking Auburn one, OSU two, Missouri three), and in both relevant human polls. And although the margins there are narrow, too, what incentive will voters have to move a one-loss Auburn or Mizzou ahead of undefeated Ohio State next week that they didn't have this week? The Buckeyes' win at Michigan was their narrowest escape of the year, decided by a failed two-point conversion in the final minute. Whatever it looks like, a win over Michigan State in the Big Ten Championship Game will go down as Ohio State's most impressive victory of the year. How wide does the margin have to be in Atlanta to overcome that?

Certainly wider than we've seen from Auburn, whose M.O. against quality opponents (Texas A&M, Georgia, Alabama) has been rallying from behind in the fourth quarter.

Ohio State is ahead and should be ahead. But the Buckeyes could still very much lose to a rising Michigan State team on Saturday.

Using the win probability data below, here are the odds of each of the above teams making the BCS title game:

As always, the projections below are based on the current F/+ rankings and historical results based on F/+ advantages. Here are all 14 games for the weekend ahead.

A turnover is worth about five equivalent points on average, which means that the results of six of the seven conference championships above could be flipped by a single interception or fumble. The chaos possibilities for the week as a whole are still pretty high, but when it comes to the national title race, really, only the top three games matter.

Yes, there is a nearly one percent chance that we get Iron Bowl II.

When it comes to the national championship game, two outcomes are more likely than others, thanks to Florida State's almost-certain win over Duke: FSU vs. Ohio State or FSU vs. the SEC champion. Let's focus on those and see how the rest of the BCS draw might shake out. 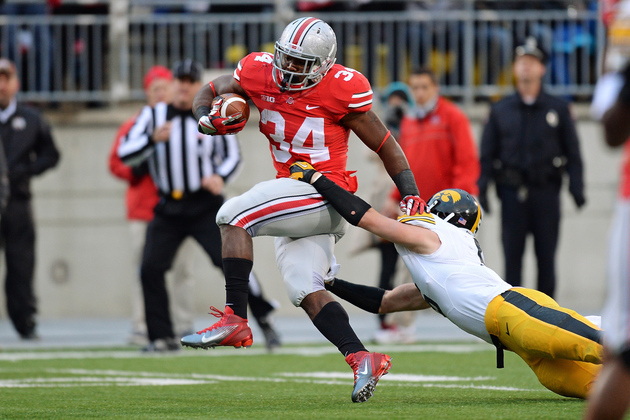 In the nearly two-in-three chance that the top two teams win out, here's how we're looking for the rest of the BCS slots.

* OSU, Baylor, and Texas are currently tied at 7-1, but OSU owns tie-breakers over both teams. If the Cowboys beat Oklahoma, they're the Big 12 champions. If they don't, however, then the Baylor-Texas winner takes the crown.

** UCF currently stands at 7-0, with Louisville and Cincinnati at 6-1. If the Knights survive weird old SMU in Dallas, they earn the AAC's automatic bid. If they lose, however, they could be in trouble. UCF obviously owns the tie-breaker over Louisville, but the Knights haven't played Cincinnati. If Cincinnati defeats Louisville to force a tie at 7-1 and surges ahead in the BCS standings (despite the BCS computers currently ranking Cincinnati in the 40s), Tommy Tuberville's Bearcats sneak in. So yes, there's about a 0.1% chance that we get a Texas vs. Tuberville Fiesta Bowl.

With Alabama all but certain to finish in the top four of the BCS standings, that pretty much seals the fate of other SEC teams. Only two teams from the same conference can play in BCS bowls, so Alabama and the SEC champion will get in while the SEC title game loser and BCS No. 8 South Carolina will be on the outside looking in.

Meanwhile, Michigan State is looking incredibly likely to land in the Rose Bowl; either the Spartans beat Ohio State and get the automatic bid, or they lose to Ohio State and get plucked by the Rose as a replacement pick after the Buckeyes make the title game. You do have to rank 14th or higher, however, to get a BCS at-large bid; if Ohio State wins big, there's a chance Michigan State falls below that line. For the purposes below, however, we'll assume the Spartans are eligible.

Really, the most inclusive drama is in Friday night's MAC Championship. If Northern Illinois loses to Bowling Green, that will open up an extra spot for another of those at-larges and probably dump UCF (or, yes, Cincinnati) to the Fiesta Bowl.

There's a chance we get the Alabama-Oregon (or Alabama-Baylor!) matchup we've dreamed about for a while, and the Rose Bowl could be fascinating as either a clash of styles and colors (Michigan State vs. Arizona State) or basically a battle of two large stones being slammed together for 60 minutes (Michigan State vs. Stanford).

But the other two matchups are less than appealing. Granted, OSU-NIU could be fun, but Auburn/Missouri vs. UCF, while competitive, wouldn't draw a huge number of eyeballs.

So let's look at the second most likely scenario now. 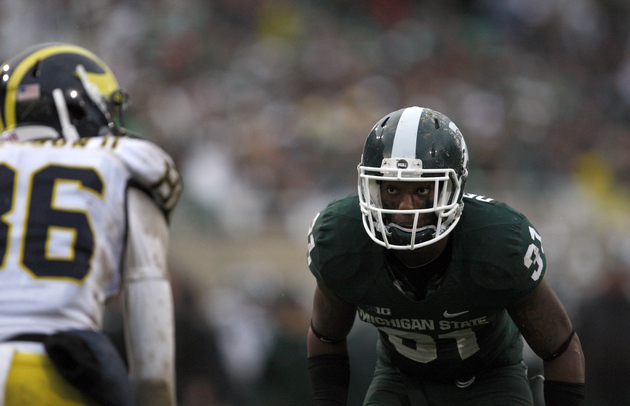 So let's say Mark Dantonio's Spartans do the SEC a solid and come through against former SECer Urban Meyer and his Buckeyes. What does that change? Not many things, really.

So basically, Alabama replaces Auburn/Missouri in the Sugar, Ohio State probably replaces Alabama in the Orange, and life continues apace.

As for other scenarios ... well ... if Duke wins on Saturday and makes the Orange Bowl, we all party like it's 1958 and worry about the bowl impact later.