Not a single first round game was decided by single digits. Will the second round see some closer action?

No. 1 North Dakota State vs. Furman

The Bison are two-time defending champions of the FCS crown, and will start their hunt for a third straight title against the Paladins. Furman won just three of their first eight games, but have since won five in a row, including a first-round win over South Carolina State and impressive victories against Samford and Georgia Southern.

Sam Houston State was a controversial at-large selection, but a dominating first-round win over Southern Utah has silenced some of those critics. The Bearkats have made the last two FCS championship games, and will be looking to make an historic upset run to the title game this year.

Montana and Coastal Carolina will square off for the likely reward of a loss to North Dakota State. Maine and New Hampshire will play what should be a fun regional rivalry game, while Eastern Washington and South Dakota State will square off in a good one. None of the first round games were decided by single digits, so there's some good teams making their way through to ranked opponents. 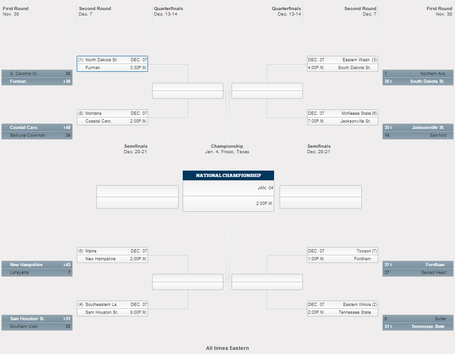 • College football news | Jameis Winston will not be charged