The Jameis Winston decision: Circuses, spotlights, and the end

After a day of press conferences, tomahawk chops, and general unprofessionalism, the Winston investigation comes to an end.

Share All sharing options for: The Jameis Winston decision: Circuses, spotlights, and the end

Meggs' decision set off a theater of absurdity, in which elected officials were cracking wise about sexual battery and Heisman Trophy voting, state senators and frat boys were sneaking into the background for moments of infamy, social media accounts of prominent broadcasters demonstrated some had lost their minds, and Florida State fans breathed a sigh of relief over the end of a case that never looked particularly strong to begin with.

Word began spreading of Meggs' decision not to charge Winston about 30 minutes before the press conference officially began:

BREAKING: Jameis Winston will not be charged in connection to sexual assault accusation source tells @JCameronShow.

It was hardly a surprise. Those reading the tea leaves on Wednesday thought an indictment was unlikely. By Thursday morning, Tomahawk Nation had obtained an unredacted version of the police report, and the holes in the prosecution's potential case against Winston were apparent:

And sources indicate those issues, along with a lack of overall evidence, are compelling.

There are other factors pointing to charges not being brought, as well. Winston's attorney has indicated that he has two exculpatory eye-witnesses who gave affidavits to police. Tomahawk Nation has learned that neither witness' DNA was matched to the second DNA sample obtained from the complainant.

At 2 p.m., Meggs took the podium to make the formal announcement, and a day full of amazingly stupid questions began.

"Is this vindication for Jameis Winston or is this just not enough information to file the charges?" was the jumping-off point, and it only went downhill from there.

Meggs said that the presence of an unknown person's DNA in the samples taken after the incident was a significant reason for the delay in announcing the decision not to prosecute Winston. He later indicated that the third person's DNA was from the accuser's boyfriend. Meggs also indicated that the accuser's blood test included a low level of alcohol and no indication of drugs, which might eliminate any claim that she was not capable of providing consent.

While Meggs admitted that it would have been "somewhat better" if his office had been brought into the investigation earlier, he had no significant criticism for the Tallahassee Police Department's handling of the initial investigation. He said that there was no evidence that TPD investigators tried to "brush it aside," but that the delay clouded the memories of those interviewed as part of the investigation.

State senator Al Lawson, Jr. was standing behind Meggs throughout the press conference. When asked why he was there, he gave a sprawling answer that eventually settled on support of the State Attorney and his constituents. Lawson is apparently a Seminoles fan, according to his infrequently updated Twitter account.

Soon, it was two-for-one night at the Laff Shack.

The second half of Meggs' press conference devolved into a laugh-fest. After a line of questioning about the relationship between Winston, the accuser, and the third man, a reporter asked yet another ridiculous question.  "I guess, was there a sexual assault?" the reporter asked.  Meggs flippantly responded, "Well, that's kind of why we're here." Soon, it was two-for-one night at the Laff Shack. Deadspin put together a highlight reel of the yuks.

In the aftermath, Meggs and the others in attendance were under fire for their happy-go-lucky attitudes. USA Today's Christine Brennan posted a column lambasting the prosecutor barely an hour after the press conference had concluded:

There was laughter. There were jokes. There were smiles. The news conference of Florida state attorney Willie Meggs announcing that Jameis Winston was not going to be charged with sexual battery was an extremely light-hearted affair.

Everyone seemed so damn happy to be talking about an alleged sexual assault.

Anyone else uncomfortable with the amount of smiling/laughter in this press conference?

She was hardly the only one unhappy with the prosecutor's tone:

Have a hard time believing Winston would be charged regardless of evidence against him given how much everyone seems to think it's a joke.

Only thing I didn't like about that press conference was everybody laughing as its a joke please be respectful to the young lady.

A man who once made an album so crude that a federal judge ruled it was too obscene to sell thinks you're being disrespectful, elected official. This is a sign you're doing it wrong.

If there was anything more distasteful than Meggs' stand-up routine, it was the response by whoever was manning NBC Sports Radio's Twitter account: 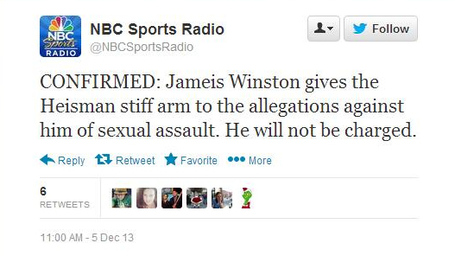 The prosecutor's press conference ended, and the assembled media reconvened outside the courthouse to hear from Winston's attorney, Tim Jansen.

And if you weren't offended by the callousness of everyone involved in this activity before, some FSU bros standing behind Jansen are here to make sure you will be now.

Heard about the #FSU students doing the Tomahawk chop during the press conference & such. How very sad & embarrassing.

The mourning of Mandela juxtaposed with the tomahawk chopping FSU students is more than my head can wrap around in one afternoon.

The FSU students in the background also tried to display a sign on magenta paper, but did not understand how signs worked. To the television cameras, they appeared to be simply holding up a piece of magenta construction paper. We can all likely be happy that was the case.

If it wasn't enough of a circus, six guys in cutoffs with "JAMEIS" written across their chests held the day's third press conference.

These FSU students ran up to the courthouse in support of Winston #WCTV pic.twitter.com/I6JLpiZg6D

The questioning only got worse, as well, with one question in particular (reportedly from a radio station intern) standing out as the dumbest query of the day (via @bubbaprog):

Jansen later released a written statement by Winston, who was unavailable for the press conference due to a scheduled football practice:

I want to thank my family, friends, coaches and teammates for standing by me during a difficult time. I also want to thank the State Attorney's Office for examining all of the facts and reaching a decision in a conclusive manner. It's been difficult to stay silent through this process, but I never lost faith in the truth and in who I am. I'm very relieved I'll be able to continue my education at Florida State and I'm excited I can now get back to helping our team achieve its goals.

There was also a statement by the victim's family:

Leave it to the two primary parties to make serious, sober statements.

After three hours of immaturity by elected officials, well-paid professionals, and the assembled media, leave it to the two primary parties to make serious, sober statements. It was high time someone did.

The Winston investigation comes to a close, and, barring any revelatory new evidence, will not return.

In the end, it played out how many legal commentators believed it would: Winston admitted that he engaged in a sexual act with the victim, but said she had consented. The accounts of eyewitnesses did nothing to contradict Winston's story, and holes in the victim's memory of what happened -- exacerbated by the 11-month delay and evidentiary issues -- made the case unwinnable for the prosecution.

The media fixated on whether Winston is "vindicated" by the decision not to pursue the case, but vindication never enters the State Attorney's calculation. He could not prove the case beyond a reasonable doubt with this victim and on these facts, and he was not going to spend the state's money fighting a case he could not win.

Jansen hinted that a civil suit could be launched against the accuser, most likely for defamation. Such a lawsuit would raise significant problems for Winston, however. This is for the simple reason that truth is an ultimate defense to defamation.

More: What can we learn from the Winston news? FSU blog Tomahawk Nation

If Winston files a civil suit against his accuser, claiming she falsely accused him of sexual assault, her defense will be that the sexual assault occurred. Not only would that defense be subject to a far lower evidentiary standard, but it would be Wiston's obligation to prove that the assault was less likely to have occurred than to have occurred. It would have been nearly impossible for the prosecutor to prove a sexual assault occurred in a criminal trial, but it could well be equally impossible for Winston to prove it did not occur on the same evidence.

The risk to Winston's public reputation from losing such a case -- the risk of a jury saying they could not definitively say an assault did not occur -- could be nearly as great as the investigation itself. He and his lawyers are too smart for that. This drama is likely at an end.