The weekend's biggest game and best matchup pits the Buckeyes' No. 1 rushing attack against the Spartans' No. 1 rushing defense. This is Big Ten football as it's meant to be played.

Share All sharing options for: 2013 Big Ten Championship breakdown: Strength vs. strength in the main event

When you combine national title implications and great matchups, the Big Ten Championship game is easily the biggest game of the college football weekend.

The SEC Championship pits two top-five teams, and the ACC Championship features the No. 1 team in the country. But Florida State isn't expected to get a full, 60-minute challenge from Duke, and Auburn-Missouri only matters in the BCS title hunt if Ohio State loses. So once the SEC champion has been decided, it's time for the headliner. Can Michigan State pull the upset? Can Ohio State come through as it has in each of the last 24 games?

Let's look at some of the key factors and questions.

Auburn's rushing attack has gotten a lot of attention, and justifiably so, thanks to its general decimation of Alabama's proud, stout defense last Saturday on the Plains.

But the Tigers don't rank first in Rushing S&P+. Ohio State does. The Buckeyes have posted silly rushing numbers in 2013, going from excellent in the first half of the year to patently absurd in the second half. In the last five games (against Penn State, Purdue, Illinois, Indiana, and Michigan), the Buckeyes have gained 379.6 rushing yards per game on a staggering 8.7 yards per carry. Bruising senior Carlos Hyde found fifth gear in these games after an early suspension, gaining 847 yards in just 93 carries (9.1 per carry). He runs angry, and he runs fast, and with Hyde at full strength, the Ohio State run game is fully weaponized.

The Gator spread attack was a ball control offense at heart, but it became explosive due to the tremendous ability of Percy Harvin. Tebow's brilliance in the system was in his wide range of competencies. He was able to master the quick reads of the system and deliver the ball in play-action, in the quick pass game, and in the option with consistency that resulted in an efficient offensive machine.

He also provided a short-yardage power run element that allowed the Gators to surround him with move explosive players at the other positions.

The emerging Buckeye attack doesn't work that way. Many of the same elements are present: The overall approach is to use spread spacing and option elements to create quick reads and low-risk/high-reward plays that allow for ball-control with the possibility for explosive plays if the skill players are really good.

If you can spread a defense out from sideline to sideline, then puncture it with a 240-pound bowling ball between the tackles, you are going to quickly demoralize a mortal opponent.

But is Michigan State's run defense mortal? The Spartans' defense also ranks first in Rushing S&P+. They allowed greater than 3.4 yards per carry only once in conference play and held three straight opponents -- Purdue, Illinois, and Michigan -- to 33 yards on 84 carries. Yes, I'm cheating by including sacks in that figure. Can't help it; that's just so gaudy. But even without sacks, these three teams rushed 70 times for 121 yards. That's almost as gaudy.

Ohio State's run game is unique and incredibly skilled, however. When these two teams met last September, Miller carried 22 times for 142 yards (not inc. sacks). The Spartans held Hyde and Jordan Hall in check (75 yards on 17 carries), but they couldn't stop both the runs and Miller's peck-and-poke keepers. They were also victimized at times by quick passes to Philly Brown and a bomb to Devin Smith.

In the end, Ohio State scored only 17 points in a 17-16 win in East Lansing. I'm sure the Spartans would feel pretty good about their chances if they once again allowed only 17 points.

Can Braxton Miller do what most cannot? 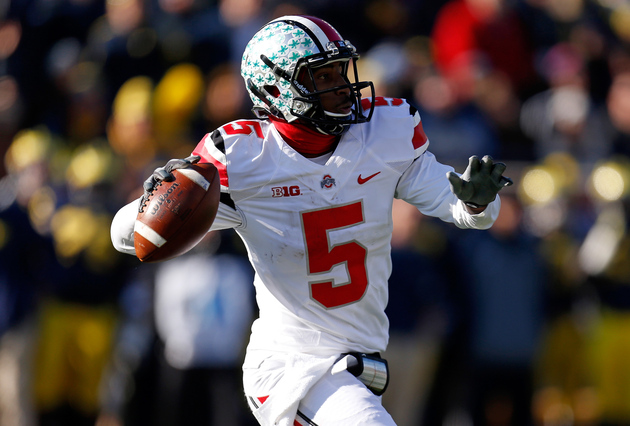 For Mark Dantonio's and Pat Narduzzi's Spartan defense, many of the principles were borrowed from the Miami 4-3 Over defenses that keyed Jimmy Johnson's rise to football prominence. These are backed by coverage principles that tend to think more highly of the staff's ability to train defensive backs than the ability of offensive coaches to field precise passing games. Their philosophy was designed for this level of football.

Michigan State packs the line of scrimmage with everyone on the team, rarely lining a defensive player deeper than eight yards off the ball and channeling the offense into constricted space. […]

The nature of this approach to pass coverage invites three particular throws from the offense: the quick out to take advantage of the linebackers' inside leverage, a go route up the seam matching a dangerous slot receiver with a safety, and the deep fade down the sideline against the press corner.

The latter play is one that Michigan State loves to see, as it's generally a low percentage throw for collegiate offenses. The vertical-minded Brian Kelly and his Notre Dame Fighting Irish threw endless fade routes against the Spartans and were rescued only by a cascade of pass interference flags flying from the officials' hands. Most opponents have not been so lucky.

One thing that is good about the Buckeye's rushing attack is that it is more downhill and power oriented than many spread offenses. I think this helps Ohio State, because moving horizontally against the Spartans isn't a great idea. This inside/outside combo of Hyde and Miller does present some problems, and while MSU is about as sound as it gets at reading their keys and surrounding the football, plays like the veer option could churn out yards at a much more successful rate than most.

What these plays really stress is the secondary involvement in the defense. It's odd to say, considering how well regarded Michigan State is in the defensive backfield, but where to start exploiting them is on the backend where they are forced to play a lot of single coverage. Because the safeties have to get involved in the run, it is the matchup between the Buckeye's slots against MSU's safeties in trying to play both pass coverage and run support that needs to be exploited. The Ohio State offense prefers to attack deep and to the outside for several reasons. For one, it's where the defense doesn't tend to already be to stop the run. But it also allows for Miller to make easier reads as the field gets spread and things open up. Against what essentially becomes single coverage, there are certain plays within the OSU scheme that will likely be called to put the receivers in positions for Miller to hit them. We'll look at a few of those plays here.

This really is a strength-vs.-strength battle overall here. Ohio State has the nation's best run game, and Michigan State has the nation's best run defense. Ohio State's is third in the country in Explosive Drives, while Michigan State's defense is first in preventing them. Regardless, Ohio State will need big plays; not only are they great at creating them, but they're also pretty iffy at sustaining drives without them.

This offense-defense matchup has gotten a lot of attention, and for good reason: it's a great one.

Of course, Michigan State will get the ball sometimes, too, right? What happens then?

Well, for starters, Ohio State will likely shut Michigan State's running game down. MSU ranks just 82nd in Rushing S&P+, and while the Ohio State run D isn't elite, 34th is still better than 82nd. Spartan running back Jeremy Langford has generated an appealing 1,210 yards and 16 touchdowns on the ground, but at only 4.9 yards per carry.

State will try the occasional jet sweep, but there probably won't be many big plays for the taking here. The goal for MSU's run game will be to set quarterback Connor Cook up with doable third downs. From SBN's The Only Colors:

Convert third downs - MSU was converting about 47 percent of third downs before going 0-for-8 against Minnesota. Because MSU doesn't get many big plays, it's important to keep drives alive with the third down conversions.

Shorten the game - This sort of goes along with third downs. Against a prolific offense, you'd like to keep it to as few possessions as possible. That means extending drives, even if it only results in changing the field position, preventing big plays on defense and avoiding turnovers.

State's performance against Minnesota, a 14-3 win, was all sorts of confusing. The Spartans averaged a robust 6.4 yards per play and were never seriously in jeopardy of losing, but while Langford rushed for a robust 134 yards in just 21 carries (6.4 yards per carry), the Spartans were awful on third down, and it cost them quite a few points.

State's failures against Minnesota went against type for the most part. The Spartans have been quite good at not only converting third downs but on making up ground on passing downs. Early in the season, offensive co-coordinators Jim Bollman and Dave Warner made the decision to not only name Connor Cook their starting quarterback, but play to his strengths as much as possible. Cook was a bit of a sitting duck in the pocket early in the season, but they constantly roll him out now, and he seems to be a better decision-maker and (strange as it sounds) more accurate passer on the move. They give him a couple of options on rollouts, and as his 17-to-4 TD-to-INT ratio (with a low accompanying 58 percent completion rate) suggests, he does well in deciding when to throw and when to just throw away.

If he's able to find receivers like Bennie Fowler, Tony Lippett and Macgarrett Kings, Jr., on third-and-5 or 7, and if he's able to avoid negative plays on such downs, Michigan State could keep the chains moving, shrink the game, and make enough stops to take the Big Ten title.

Many of Michigan State's most high profile wins have come on the heels of a fearless trick play call from the Spartans' head man. Be it "Little Giants" or "Charlie Brown", there's a better chance than not that Dantonio will elect to roll the dice should the situation present itself. Ohio State had better be ready.

In the end, my bet is that Ohio State indeed holds off the Spartans. The Buckeyes are explosive, and they should make just enough big plays to build the separation they need. But if the Spartans are able to shrink the game and force a couple of turnovers, limiting Ohio State's opportunities to indeed pull away, then an upset goes from possible to probable.

Ohio State might have the best first-quarter offense in the country, so if the game is tied after 15 minutes, the Spartans have turned this game into a complete tossup. Pick the Buckeyes, but don't pick them very confidently.