Just when the longtime Texas coach was out, we pulled him back in. Is Sunday the day for Mack Brown?

When Texas fell to 1-2 with a home loss to Ole Miss, Mack Brown told reporters that his program had a chance to "get all this righted by winning the Big 12." We chuckled at the idea. The thought of a team that had given up a program-record 550 rushing yards to BYU and fired its defensive coordinator pulling it together for a conference title run seemed preposterous.

Twelve weeks later, when the final gun sounded in Stillwater, Mack Brown and his Longhorns suddenly had precisely that opportunity. Oklahoma State's loss to Oklahoma left Texas tied with Baylor atop the conference standings and made Saturday's game between the Longhorns and Bears the de facto Big 12 Championship Game. Texas would have a hard time forcing its coach out after a conference championship and Fiesta Bowl berth. One win stood between Brown and salvation.

Thirty minutes later, it looked like Texas could pull it off. Baylor's high-powered offense had produced just three points in the first half against that much-maligned Texas defense, and if Texas' offense could get it together, a Big 12 title was on its way.

Four minutes later, the defense broke, and it was all over soon after. When Baylor's Glasco Martin IV exploited a massive hole in the Texas defensive front -- the same kind of hole that opened over and over against BYU and Ole Miss in September -- and scampered untouched for an 18-yard touchdown to seal the Bears' victory, the clock again started ticking on Brown's tenure in Austin.

While Brown still enjoys some national media support -- ESPN's Lou Holtz and Mark May, whose job is arguing over things like this, agreed Saturday night that Brown should stay -- good luck finding a prominent local media member who thinks Brown won't retire or be fired. The Austin American-Statesman's Kirk Bohls, who was calling this "one of Brown's finest coaching years" just six days earlier, cut the cord Saturday night. Burnt Orange Nation did the same:

After another big game loss at the hands of another conference upstart, this time, this place Brown finds himself surely must qualify as the no fun pinnacle of an otherwise good coaching career.

Coach Brown, for the good of the program please step aside. No one is having fun anymore.

Barking Carnival was relieved that the drama would not go on another year, as if the termination was a fait accompli:

Now that we've lost, I'm disappointed, but frankly relieved. And I feel bad to admit that. The Emperor sits without clothes again. Two conference titles in sixteen years coaching at the best job in the Big 12, if not all of college football. 18-17 in the Big 12 over the last four years (six of those wins coming against ISU and KU). Everything else is noise. Sixteen years is a sufficient sample size and we've experienced just as much good luck as bad. The question is whether the people that make decisions will notice.

It's time for change. At this point, I can only shrug at the banality of this truth. It's as self-evident as gravity.

"We played for us, not him." - Case McCoy, on playing in possibly Mack Brown's final season #HookEm

If it's going to be done, it will likely be done this week. And there is little reason to believe that it won't happen now. A new athletic director, a disappointing season where the coach's own goal was not met, a minuscule buyout, and a fanbase that is simply ready for something else all add up to a firing or retirement.

Nebraska AD Shawn Eichorst has said he's not making a move until the season is over, meaning Pelini is here through Nebraska's bowl game at a minimum. As a result, there's no real movement on the FIRE BO movement this week. He was fined $10,000 by the Big Ten for his comments regarding the officiating of Nebraska's season-ending loss to Iowa, but Eichorst knew that was coming when he issued his vote of confidence. Eichorst made a scheduled radio appearance where he again supported Pelini and the football program, but made no serious news. We'll revisit this after the bowl game.

Rutgers ran Kyle Flood Bobblehead Day for the season finale against South Florida. The administration decided to hand them out to fans as they left the stadium, presumably to prevent fans from stoning Flood with his own likeness.

The Kyle Flood bobblehead. Rutgers will hand them out to fans on the way OUT of the stadium. Smart. pic.twitter.com/GXzSM8H7ZQ

It turns out the protective measures were not needed. Rutgers, which had lost five of its last six games and was last seen losing by double digits to UConn, throttled South Florida Saturday to finish its season 6-6 and earn bowl eligibility. Before the fans had filed out of the stadium, the Pinstripe Bowl had announced that the Scarlet Knights were coming to the Bronx to play Notre Dame.

If the bowl trip was not enough to save Flood for one more season, the Newark Star-Ledger's Steve Politi -- who has made a cottage industry out of Kyle Flood reporting this season -- says that Rutgers might be "too cheap" to buy out its second-year coach:

Rutgers won't fire Flood because it'll cost a lot of money, and that's because the school has yet to come to grips with the cost of doing business in big-time college athletics.

The buyout in Flood's contract is just $850,000, but according to someone familiar with the actual contractual obligations, it would cost closer to $3.5 million clean house in the football building when you factor in his assistants' salaries, payroll taxes and other fringe benefits.

So Rutgers, which spent a combined $1.6 million to get rid of basketball coach Mike Rice and athletic director Tim Pernetti in the spring, would have to eat more than twice that for a coach who, no matter what happens on Saturday, will have a winning record. This, for many on campus, would be far more outrageous than losing to UConn.

Politi points out that Rutgers' deal with the Big Ten prevents the school from receiving its full share of conference lucre until 2020, so the idea of a windfall from Jim Delany covering the costs is unrealistic.

There are still ample reasons to fire Flood. Obviously, the allegations that Flood's defensive coordinator bullied a player still hang out there, but can be remedied quickly if Flood would simply fire the coordinator (Rutgers allowed nearly 30 points per game in the AAC; he should probably be fired anyway). His recruiting class is still in tatters, but it is comparable to other lower-tier Big Ten teams even with its four-star recruits jumping ship. And keeping a coach around because you don't want to spend $3.5 million, whether that money is available or not, appears small-time for a program with big ambitions.

These things are all still in play, bowl eligibility or no. Whether they outweigh the financial issues or what modest goodwill the season finale created remains to be seen.

Fuente's hot seat is the natural result of losing to UConn by five touchdowns. Fuente's team, which had shown signs of life with a pair of November wins and a near-miss at Louisville, collapsed into a pile of rubble in the season's last two games. The Tigers lost by a combined 55 points to a pair of conference teams that went 5-19 on the season. In doing so, Memphis finishes last in the AAC.

Fuente is owed a lot of money, and he has had only two years at the helm to change a program that fired the last coach after two seasons. The buyout might trump the late-season collapse, but if he does survive, Fuente would start 2014 as one of the nation's most embattled coaches. Memphis fans still appear reasonably confident in the future.

Chow was a punchline for most of the week, as every person critical of Steve Sarkisian's hiring at USC tweeted the same joke about him becoming the next Trojans' next coach.

So basically, the USC job has become a menagerie of former Pete Carroll assistants since he left (Kiffin, Coach O, Sark). Is Norm Chow next?

Was Norm Chow not available for USC?

Someone more familiar with the USC coaching line of succession: Norm Chow is next in line, yes?

If Sark doesn't end up working out, I hope Norm Chow gets the USC job next.

Norm Chow was a Pete Carroll guy too. Why not hire him? Who cares if Hawaii's 1-11?

There has been no actual movement on Chow by the administration at Hawaii, but the newspaper columnists keep going after him. He is probably safe, but it's not out of the question for a mid-major to move late on a coaching switch.

Rich Ellerson got a Dreaded Vote of Confidence this week, but his job is simple: Beat Navy and keep your job. Lose, and it's probably curtains.

Ron Turner might hit the ejector button on his tenure at Florida International and head back to the NFL, if the opportunity presents itself. If not, it's up to Pete Garcia whether he stays. And nobody can predict Pete Garcia.

(NOTE: These are in addition to those we deemed safe last week) 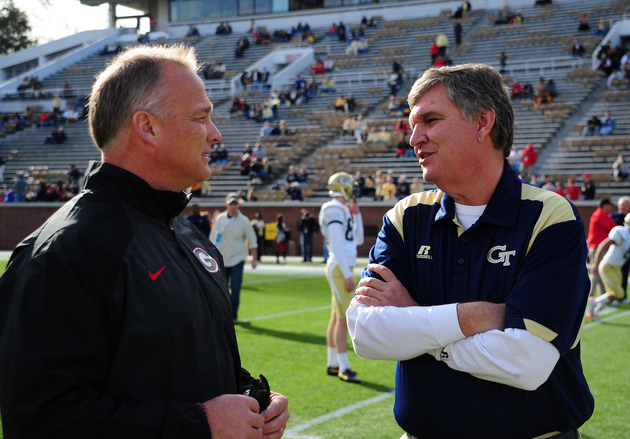 Shockingly, in the wake of Georgia Tech's meltdown loss to rival Georgia in last week's season finale, there has been no real scuttlebutt regarding Johnson's position with the program. His record, especially over the last three seasons, is historically enough to get a GT coach axed, and his buyout is not prohibitive in the least. There remains an outside possibility that a move comes after the bowl game, but the silence makes it more likely that Johnson's going to return.

West Virginia AD Oliver Luck issued a written statement of support for Holgo this week, putting to bed any rumors of his demise. It's hardly complimentary -- "We have high expectations at West Virginia University for success on and off the field and as Coach Holgorsen has acknowledged to me, we are not meeting those expectations on the field" -- but it gives Holgorsen enough support to go on the recruiting trail and make a pitch that he will be there for the long haul.

Mid-majors who avoided the axe:

Calhoun, whose Falcons lost 10 games for the first time ever this year, got a strong vote of confidence from athletic director Hans Mueh. He's not going anywhere, apparently, unless of his own volition: Calhoun has been connected to the Wake Forest vacancy -- he was Jim Grobe's offensive coordinator from 2001-03 -- though that looks like a long shot.

• Hot seat watch: End of the line for Mack Brown?

• College football news | FSU favored over Auburn by a touchdown