The Bowl Championship Series did pretty well in choosing the two teams most deserving of a national title shot. But what happens next year when we've got a four-team playoff? And is four the most satisfying number? What happens if we do 16 or 24 or 32?

Share All sharing options for: Eight 2013 College Football Playoff brackets, from 4 to 32 teams

In its final year, the Bowl Championship Series produced a national title game featuring what most consider the two teams most deserving of a shot. There was not a clear, obvious, equally deserving No. 3 team.

Florida State was the best team in the country for the longest period of time this season. Auburn finished the season smoking hot after taking down two straight top-five teams, including the two-time defending national champion and SEC East champion Missouri. If we had to pick only two teams for a shot at the title, that is a pretty good pair. Next year, however, we won't get to stop there.

The four-team College Football Playoff begins in 2014, and as SI's Stewart Mandel mentions, picking four teams this year might be a bit of a mess. But using the BCS standings as a starting point, let's take a look at who would have probably made the four-team cut.

And then, for fun, let's go a lot further.

First of all, would the four-team model we're getting next year be a mess? Assuming 11-1 Alabama would get the No. 3 spot in a playoff -- and considering overall quality and only a road loss to the No. 2 team marring the record, I think Bama would be a no-brainer -- that would leave the following potential candidates for No. 4: Michigan State (12-1, Big Ten champion), Stanford (11-2, Pac-12 champion), Baylor (11-1, Big 12 champion), and probably Ohio State (12-1). To be considered as a two-loss team, you probably have to be a conference champion, so teams like Missouri, South Carolina, Oregon, and Oklahoma are out. And UCF has struggled too much at times versus inferior competition to be taken seriously.

Because of strength of schedule and big wins, you could make a pretty good case for Stanford to be the No. 4. And honestly, because of injuries (and the likely health of the team come bowl season), you could make a stronger-than-expected case for Baylor. But if you're handicapping this race, I think Michigan State, winners of nine straight and surprisingly easy conquerors of Ohio State in Indianapolis on Saturday, gets the nod. SB Nation's Team Speed Kills agrees.

All brackets made at the wonderful Challonge.com.

Perhaps the best way to get a feel for the playoff model you're going to have is to look at ones you COULD have had. So let's look at other possibilities. Are you as satisfied with the four-team lineup as you would be with some of the others?

In this one, the top two seeds are rewarded with byes. I think a six-team lineup would be pretty easy to determine this year.

Drawbacks: In most years, we're going to end up with between two and four or five teams we've been trained to feel are truly deserving of a title shot. Stretching to six would already start to include teams we had eliminated a while ago. (Of course, we would have eliminated a team like Baylor because of our trained mindset. That mindset would change over time.) 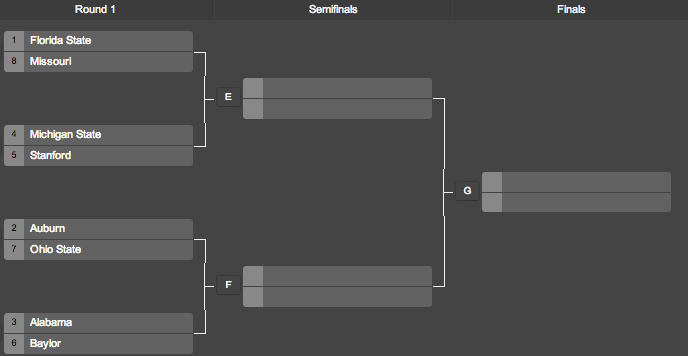 Missouri gets the nod because of the Tigers' eighth-place finish in the BCS standings, but this could easily be South Carolina (which would boast a head-to-head win over Mizzou), Oregon, Oklahoma, or Clemson. Or, yes, perhaps UCF.

As was once advocated by Matt Hinton, a 10-team playoff could absolutely include automatic bids for conference champions, though since we kind of have a "big five" instead of a "big six" now, we'll change his original idea to "big five champions and highest-ranked mid-major champion" instead. The top five seeds are given to power-conference champions. 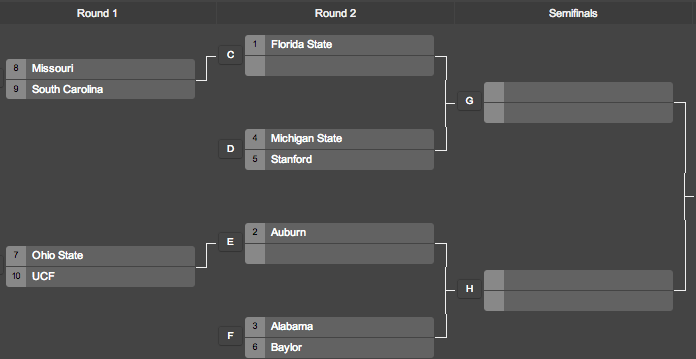 So No. 9 becomes the controversial spot. I give it to South Carolina because of the BCS standings, but obviously Oregon, Oklahoma, Clemson, etc., would also be in play, just as they were for the No. 8 spot.

(I will forego a 12-team bracket since it would be the same, only with two more from the Oregon/Oklahoma/Clemson/whoever pool.)

16-team playoff, including all conference champs

At 16 teams, we're weighing whether or not to include all conference champions. I love the idea of everybody in FBS having a defined path to the national title at the beginning of the season -- I have socialist leanings sometimes -- so let's say that all conference champs indeed get a seat at the table. This is more feasible now that there are only 10 FBS conferences instead of 11.

At this stage, we also start to bring the "Home field for first- and perhaps second-round games" option into play. So does the idea of allowing first- or second-round losers back into the bowl pool, as I once advocated.

So what if we took the "conference champions" idea to its extreme and created only a playoff between champions? 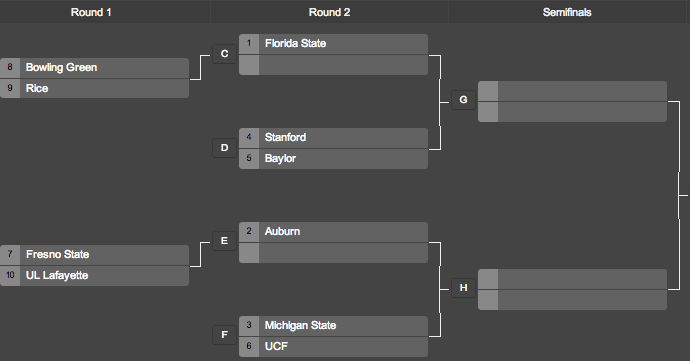 People would raise such incredible hell if Rice had a shot at the national title and Alabama didn't. It would be fantastic.

I mean, if we've got a playoff now, why don't we have a playoff? 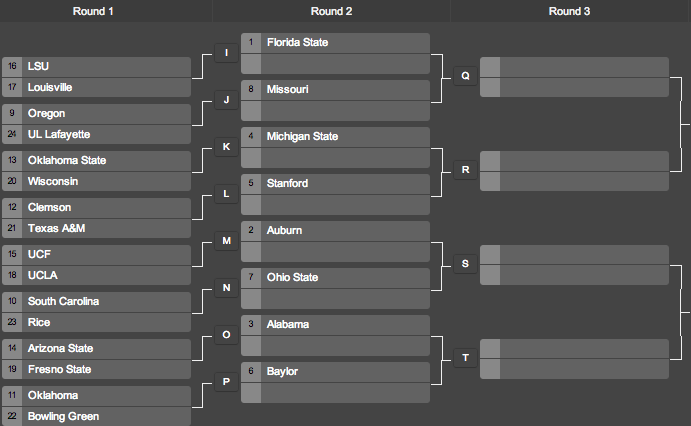 I mean, if we've got playoffs at the FBS level now, why do we need a "Championship" subdivision at all? This would work just like March Madness, with every FBS and FCS conference champion earning an automatic spot. (Seeds below are determined by a combination of BCS rankings and Sagarin rankings, which include FCS teams.) 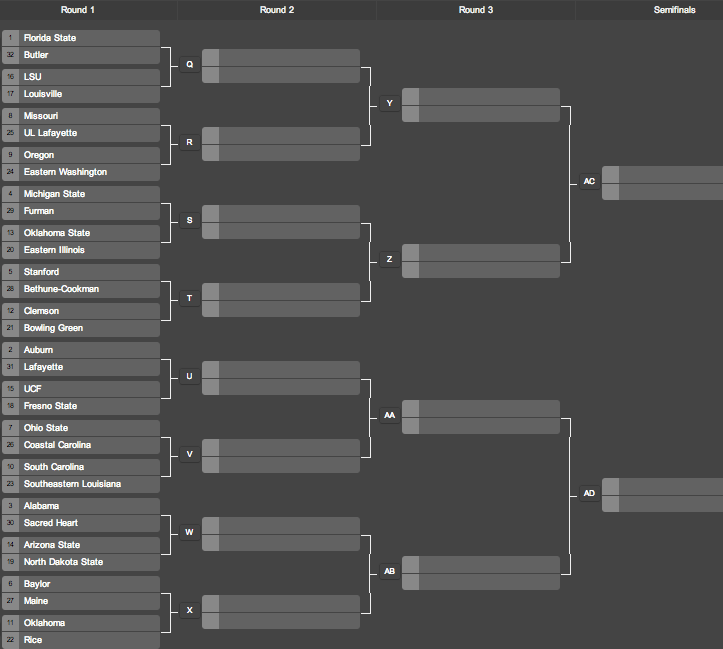 Tell me you couldn't see NDSU taking down Arizona State. Games like that and perhaps EIU-OSU would totally be worth the human-sacrifice games like Butler-FSU and Alabama-Sacred Heart. Or Auburn taking on a team that kind of doesn't give out football scholarships.

So what do you think? Which alternative is the most aesthetically pleasing to you? Does the four-team playoff hold up in your eyes?

• College football news | FSU favored over Auburn by a touchdown