Texas State's first year at the FBS level went about as well as could have been reasonably expected; the Bobcats have some questions to answer in year two, but the ceiling is reasonably high. The basics and much more below.

Texas State was a member of the Southland Conference in 2010 (it went 4-7), an Independent transitioning from FCS to FBS in 2011 (6-6), and a member of the WAC in 2012 (4-8). With the WAC's demise, TXST caught a ride on the Sun Belt bus. Granted, further instability could land the Bobcats in yet another conference soon, but in theory the Sun Belt isn't going anywhere, and Texas State might have the same conference foes for at least two straight years.

2. Dennis Franchione is making upgrades in a hurry.

Of the four FBS newcomers in 2012, Texas State put the most high-quality overall product on the field. UMass ranked 122nd in the 2012 F/+ rankings and went just 1-11, South Alabama ranked 118th and went 2-11, and UTSA ranked 116th and went 6-4 (versus FBS/FCS opponents). Thanks to two tight losses (62-55 to Louisiana Tech at home, 38-31 to UTSA on the road), the Bobcats went just 4-8, but a No. 99 F/+ ranking (just below Washington State, just ahead of Wyoming and Air Force) suggests that they were close to something much better. Texas State couldn't play a lick of defense, and that eventually cost them (as it usually does), but this team had a decent amount of promise. And in the 2013 recruiting class, head coach Dennis Franchione, now in his third season in San Marcos, brought in eight three-star recruits and 10 junior college transfers. He isn't wasting time in his efforts to upgrade this program, and his squad should be expected to compete reasonably well, reasonably quickly, in the Sun Belt.

More: Previewing every Sun Belt team, one by one

3. That could have gone worse.

If TXST had managed a 3-0 record in one-possession games, the Bobcats could have eked out .500 in their first FBS season. That didn't happen, of course (and it was just as close to 3-9 as 6-6), but between the upset win at Houston to start the season, competitive showings against Nevada, San Jose State and (especially) Louisiana Tech, and easy, systematically destructive wins over Idaho and New Mexico State (combined score: 104-35), Texas State proved it belonged at the low-FBS level and that there wouldn't be any sort of major transition period before they could expect to succeed.

In the end, that's really all you can hope for during the FBS transition. Fans may hope for a Marshall-like transition, but that almost never happens. 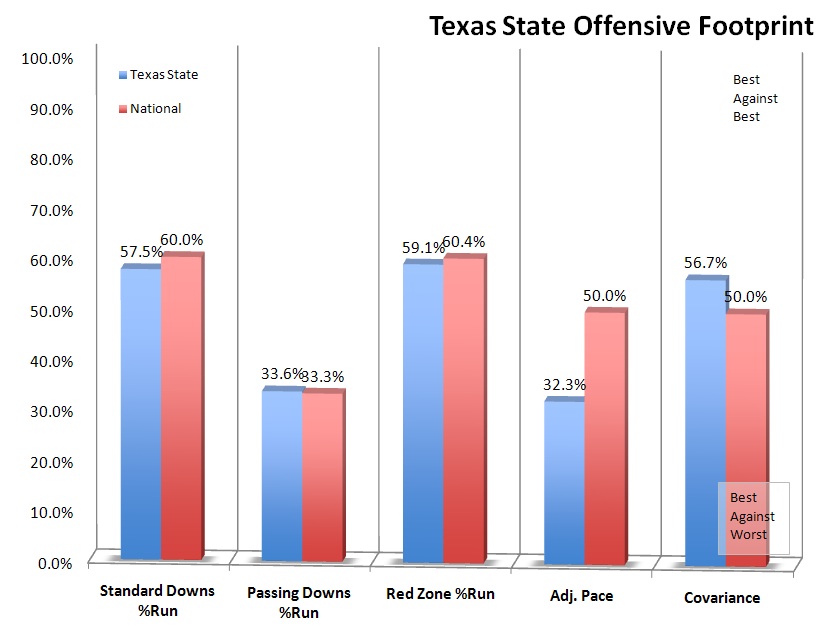 4. The gameplans were great.

Texas State had a pretty ferocious first-half offense in 2012. The Bobcats averaged 19.2 points per game in the first half, and averaged 13 points in the first quarter of their four wins. It didn't last, of course; TXST averaged just 9.4 points per game in the second half (6.9 in losses), suggesting that while the attack and intent were pretty good, there was not enough depth or versatility to account for the adjustments defenses were typically able to make as a game went on. The fan in us wants to scream, "They couldn't make halftime adjustments!" when we see something like this; but really, TXST probably just didn't have the horses.

With Shaun Rutherford and tailback Marcus Curry, Texas State had a pretty impressive pair of ground-gainers in the backfield. Throw in Tim Gay and Terrence Franks, and you had a foursome that combined for 1,981 yards (5.8 per carry) and 21 touchdowns. But in the end, attempted balance actually somewhat hurt Texas State. As you see above, the Bobcats actually passed more than the national average on standard downs, trying to take pressure off of the run game with early-down passing. But opponents caught on and adapted to this pretty quickly, and the passing game struggled mightily for much of the year.

Offensive co-coordinators Mike Schultz and Jeff Conway clearly want balance in their offense, but while that approach almost hurt in 2012, balance might be the only way forward for the Bobcats in 2013. Both Rutherford and Curry are gone, and while the backfield could still be loaded -- Franks and Gay return and are joined by three-star junior college transfer C.J. Best and three-star Jamel James -- it doesn't appear there will be the same run threat from the quarterback position. So a receiving corps that features a few interesting, semi-efficient weapons will need to raise its collective game a bit. And so will senior quarterback Tyler Arndt, or whoever happens to win the starting job.

Like Georgia State with Albert Wilson, Texas State has a lovely receiving-and-returns threat in senior Andy Erickson. The Rice transfer was the steadiest weapon in the passing game, and he was a particularly dangerous punt return man. Senior Isaiah Battle, two three-star freshmen, and three incoming junior college tight ends could assure that defenses cannot key on Erickson; that could be a very good thing for TXST. 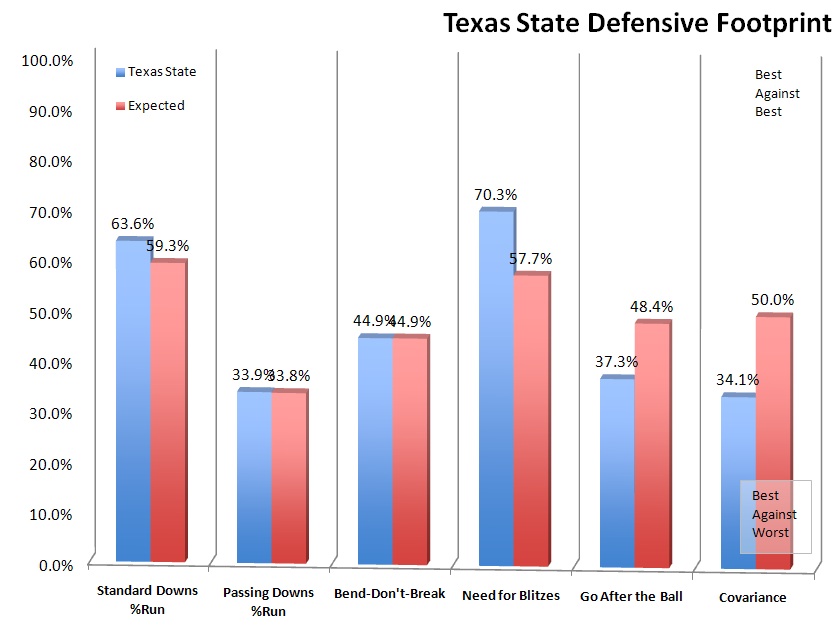 That's really, really bad. It is quite possible that Texas State had the worst pass rush in the country last season, and with the departure of linebacker Joplo Bartu, the Bobcats must replace the only player on the roster who took down the quarterback more than twice. And unlike the secondary, the front six (TXST runs a 4-2-5) was not supplemented significantly by recruiting; improvement depends, in part, on three transfers: D.J. Yendrey (from TCU), Donald Hopkins (from Houston) and Kingsley Ike (from Purdue). A fourth transfer (Mike Orakpo from Colorado State; and yes, Franchione is taking a chance on both a player involved in last year's TCU arrests and Orakpo, who was kicked out of CSU for his role in a fight) should contribute immediately at linebacker. The front line absolutely has to figure out how to be more disruptive if the newly plumped secondary is going to succeed to any certain degree.

Seven members of the 22-man recruiting class are defensive backs (assuming star freshman Dila Rosemond ends up in the secondary as planned), and three are junior college transfers. This pretty clearly suggests that Franchione and company were unhappy with the play of the five-man secondary last year. I struggle with this a bit -- if your pass rush is entirely nonexistent, your secondary is behind the 8-ball before we can even find out if it's any good; regardless, one should assume that Franchione now has the warm bodies available to maximize the speed the 4-2-5 emphasizes.

The special teams unit is incredibly variable from year to year, but one would assume that a Texas State unit that ranked 14th and returns both punters, its place-kicker, a good kickoffs guy and explosive returners in Andy Erickson and Jafus Gaines, should once again be a strength.

We don't yet know what the home-road splits will be in the Sun Belt schedule, and that could make a pretty big difference for Texas State. But with winnable non-conference home games versus Prairie View A&M and Wyoming, a winnable road trip to Idaho (and, in theory, Southern Miss), and three conference games versus teams projected 100th or worse, Texas State has a reasonable path toward six wins if the Bobcats can once again put a Top 100 product on the field. If the special teams unit takes a negative turn, the quarterback situation is not resolved, and the enhancements to the defensive personnel don't immediately take, however, a second-year regression isn't out of the question.

Texas State's first year at the FBS level went about as well as could have been reasonably expected; the Bobcats have some questions to answer in year two, but the ceiling is reasonably high.