Yes, you can bounce back. See below for the Trojans' schedule, early depth chart, projections and much more.

Two years ago in my 2011 Troy preview, I fawned a bit over Troy head coach Larry Blakeney:

He just celebrated 20 years as Troy's head coach. When he took over the Trojans, they were a Division II independent. He helped to transition them to the 1-AA level and won three Southland Conference titles, making the 1-AA playoffs seven times in their nine years at the level (and in the first year, they went 10-1 but weren't eligible for the playoffs).

After less than a decade at 1-AA, Blakeney helped to transition the Trojans to the 1-A level ... and he has won or shared five consecutive Sun Belt titles. Despite all the transition, despite all the movement, Blakeney has won 161 games, including at least eight in each of the last five years.

To put it another way, Blakeney won the All-American Football Foundation's Johnny Vaught Lifetime Achievement Award in 2000 ... before he had even accomplished anything at the 1-A/FBS level. Since then, he's one-upped himself.

Blakeney is a tireless recruiter and brilliant representative of this small school in southern Alabama. (That he has one of the most beautiful Southern drawls imaginable is just a bonus.) He has won games, he has produced 18 NFL draft picks in his 20 years (four in the first or second round), and now he has potentially his most talented offensive player lining up for him for another two to three seasons. There is a lot to celebrate about Blakeney's career, one that has not even begun to approach the homestretch yet.

The record only improved a little bit (two games), but in 2012 Troy's on-field product improved rather dramatically considering all that went wrong the year before.

Suddenly, Troy could move the ball again. Quarterback Corey Robinson cut down on his mistakes, the run game improved from 110th in Rushing S&P+ to 67th, and while the defense was still rather vulnerable to big plays, it was quite a bit more efficient and aggressive. Without making a series of panic moves, Blakeney was able to navigate a solid level of improvement in an improving Sun Belt conference. For fans clamoring for mass firings at their school of choice because of one bad season, this should probably serve as a nice teaching point.

3. Close games can break you.

Troy ranked 78th in the F/+ rankings, virtually even with Western Kentucky and ULM and 18 spots ahead of a Middle Tennessee team that finished 9-3. So how exactly did the Trojans finish 5-7 and miss a bowl for the second straight year?

They couldn't closet. They lost by seven to Tennessee, Arkansas State and Florida Atlantic, six to Mississippi State, five to Western Kentucky and three to Middle Tennessee. In all, they were 1-6 in games decided by a touchdown or less, 1-4 in such games in conference play. Simply improving to 3-4 in such games would have probably earned Troy a bowl bid (then again, Middle Tennessee didn't get one at 8-4) and cast an entirely different impression on the 2012 season.

Now, make no mistake: Troy shouldn't have lost to Florida Atlantic. At the very least, that inexcusable loss kept them from reaching bowl eligibility. In that game, Troy allowed FAU to jump out to a 17-0 lead, then score the winning touchdown with 17 seconds left. There was plenty of blame to go around in this series of close loses, especially considering this was a pretty experienced team. Still, according to the data below, Troy was hindered by about 3.5 points per game of bad turnover luck, and if the Trojans had gotten a second chance at this 12-game slate, they very well could have finished 8-4 or better. This was a decent team, one that resembled 2007-10 Troy a lot more than 2011 Troy.

One problem: It was an experienced team, and now it has some holes to fill. 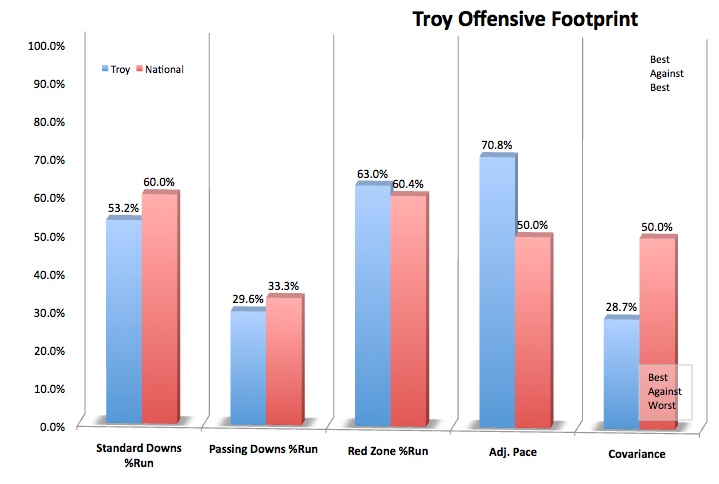 4. Troy is loaded behind center.

As a sophomore, Corey Robinson was exciting and reckless. He threw for more than 3,400 yards, completed 21 touchdown passes ... and threw 15 interceptions and took 20 sacks. His junior season, however, was pretty much the blueprint for year-to-year improvement. In 2012, Robinson improved his completion percentage from 62 percent to 66, cut his interception rate from 3.0 percent to 2.3 percent, improved his sack rate (with obvious help from his line) from 3.8 percent to 2.3 percent, and improved his per-attempt pass yardage by 26 percent, from 6.1 yards to 7.7. That is fantastic.

He did have help, of course. An improved (and more frequent) run game took quite a bit of pressure off of his shoulders, and a line that entered the season with only one multi-year starter held up nicely. Still, a lot of Robinson's improvement can be credited directly to Robinson.

But Troy isn't "loaded behind center" simply because of Robinson. The Trojans actually enter 2013 with two interesting senior quarterbacks; Deon Anthony carved out a nice role as a run-first, change-of-pace guy. He was second on the team in rushing and actually completed a higher percentage of (shorter) passes than Robinson. That towering sophomore Dallas Tidwell is still a third-stringer heading into his sophomore season is a very good sign about Troy's overall depth.

While Robinson's improvement was obvious, he got a lot of help from a corps of skill position players quite a bit deeper than your normal mid-major. Running back Shawn Southward was steady and solid after a poor junior season, and a deep receiving corps saw six players targeted at least 40 times. Senior Chip Reeves, who missed 2011 with academic problems, returned and thrived in the No. 1 spot.

The obvious problem for 2013: Southward is gone, as is primary backup D.J. Taylor, and four of those six high-volume targets have also used up their eligibility. The leading returning running back, Khary Franklin, carried three times last year, and while receivers Eric Thomas, Chandler Worthy and B.J. Chitty were all relatively proficient last year, they were used mostly in efficiency roles. The same goes for Corey Johnson, who filled a similar role in 2011 before missing 2012 with injury. Reeves was the big-play guy and will be missed.

Last year's Troy line returned only one player with more than eight career starts, but there were still quite a few juniors and seniors involved. In 2013, the Troy line is quite a bit thinner in the experience department. Terrence Jones has been a starter for most of two years, but the line's 30 career starts will be one of the lower numbers in the country this year. Throw in a new offensive line coach (Jim Dye), and you've got a huge wildcard for 2013.

7. A remade defensive line held up (against the run, at least).

Only two of Troy's top eight defensive linemen returned from 2011, but a mix of junior college transfers and returnees combined to ensure there wasn't an extreme drop-off. Well, sort of. The line was stellar at hemming in run plays, but only one lineman managed more than two sacks, and considering a passive linebacking corps, one built more for run support and pass coverage than blitzing, didn't generate any sort of consistent pressure. When you add Arkansas transfer Lonnie Gosha and some interesting freshmen, you see a pretty solid, interesting line. But without its star (Tony Davis), it's hard to imagine the pass rush somehow improving.

Troy's defense was confusing in 2013. Solid success rates combined with poor PPP (explosiveness) figures usually suggests a defense that takes risks, racks up the tackles for loss, and gives up a lot of big plays in the process. Instead, Troy made almost no disruptive plays whatsoever but still made a lot of stops short of the first-down marker ... and allowed a lot of big plays. Without Tony Davis, Troy might need a stripped-down linebacking corps to do a little more in the disruption department. Can it?

This was a hit-or-miss special teams unit in 2012. The return game was pretty iffy, but the legs were strong. Will Scott made five of seven field goals over 40 yards, booted a high number of touchbacks, and prevented returns in the punting game. Scott returns, so at worst this unit shouldn't be any worse than last year's. We'll see if the return game improves.

Troy improved significantly in 2012, especially on the offensive side of the ball. But as with 2011, the Trojans are now facing a serious rebuilding job among the skill positions, and the offensive line is green. And on defense, Troy must replace its best lineman, two best linebackers and best safety. Even if Troy's awful 2012 luck turns around, will it matter, or will it simply offset another dropoff in overall product?

Larry Blakeney didn't dip heavily into the JUCO pool with his 2013 recruiting class, which at least indirectly suggests he's not too tremendously worried about his talent pool at hand. But in 2013, a relatively young Troy squad will have to figure out how to both tread water in terms of production and close games better if the Trojans are to avoid a three-year no-bowl streak. A diluted Sun Belt could help, but Troy still has a lot of questions to answer.