Share All sharing options for: Too late for FAU's prison sponsor GEO Group to erase its Wikipedia record

Florida Atlantic University has come under fire for accepting a massive donation from private prison administration company the GEO Group in exchange for naming rights at the Owls' new football stadium. The GEO Group agreed to donate $6 million to FAU Athletics over 12 years in exchange for the right to name the facility. The company, like Florida Atlantic, is based in South Florida, and CEO George Zoley is an alumnus of FAU and former chairman of the school's Board of Trustees.

Recently, the GEO Group has been criticized for its ownership and operation of the Broward Transitional Center, a 700-bed pseudo-prison in Boca Raton where undocumented immigrants charged with minor offenses are jailed for weeks or months. A report by Megan O'Matz of the Sun Sentinel detailed allegations of botched post-surgery care, inmate suicide attempts, volunteer labor that pays $1 per day and neglected psychiatric treatment, plus for-profit GEO's appeals to the federal government against immigration law relaxation. Last summer, an inmate staged a hunger strike to protest conditions at BTC.

Beyond the human rights issues raised by a facility accused of improperly detaining those accused of minor, nonviolent crimes, the facility has become a symbol of the immigration debate in diverse South Florida. The FAU announcement only served to further fuel outrage over its operation. Otherwise disparate groups are uniting to protest the school's decision: two separate online petition drives, led by human rights activists and DREAM Act supporters, have sprung up in the last 24 hours.

The Broward Transitional Facility is not the only controversial aspect of the GEO Group's business. The company was the operator of the infamous Walnut Grove Youth Correctional Facility in Mississippi, a prison for 13- to 22-year-old inmates convicted as adults for crimes committed as juveniles. A 2012 report by the U.S. Department of Justice, as detailed by National Public Radio, found that prison personnel engaged in "systemic, egregious and dangerous practices," from failing to provide educational and medical services to actively assisting and engaging in gang fights. The report found that prison staff had engaged in sexual activity with inmates "among the worst that we've seen in any facility anywhere in the nation," activity which included the prison warden taking an inmate out of the facility to a motel for sex.

The company also operated an Indiana prison where a prisoner riot erupted in 2007 over alleged prisoner mistreatment. Complaints have also been made about prisoner treatment and care in GEO-run facilities in Pennsylvania, Texas, California, and overseas. The GEO Group has denied any inappropriate conduct by its employees in almost all of these matters.

As of Wednesday morning, the controversies over BTC, Walnut Grove, Indiana, and other alleged incidents were detailed on the GEO Group's Wikipedia page in a subsection aptly titled "Controversies." Such information had been available on the page since the 2007 Indiana riot; the subsection was created in 2008 and, despite occasional deletion by anonymous users, remained on the page until Wednesday afternoon.

As Jesse Lava at the Huffington Post reported, the GEO Group appears to have gone to work on its Wikipedia entry a day after SB Nation and others shared its contents. User Abraham Cohen (an individual named Abraham Cohen is GEO Group's most frequent spokesperson, plus a former FAU student body president and ex-officio Board of Trustees member) made 14 changes to the page over the course of six hours Wednesday, deleting all references to the prior controversies and replacing them with general corporate information cut-and-pasted from the company's shareholder prospectus on stock splits and mergers. The user did not bother with making the edits appear neutral; the word "our" was used 15 times, "we" 10 times.

We've attempted to reach Cohen by phone and email and will update if we hear back. GEO Group has declined to comment. 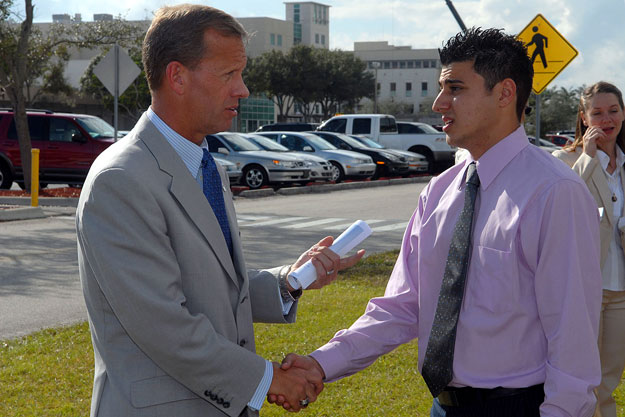 One Wikipedia user tagged the edit as "a celebration of human rights abuses." Another restored the original version, calling it the "less blatantly promotional version" of the page.

Two hours after the page had been restored, the corporate information provided by user Abraham Cohen suddenly reappeared in the capsule, posted from an anonymous IP address which claimed the information "accurately reflects the history of the company" and was not "promotional material":

Wednesday night, a Wikipedia user deleted the new content, stating that its first-person perspective is a violation of the site's neutrality principles. The records of edits made both by user Abraham Cohen and the anonymous GEO Group user have since been removed from the public history page. [Update: They're there now.]

This is not the first time the GEO Group has run into trouble on the Internet; last year, Anonymous hacked the company's website and replaced it with a rap video about convicted murderer Mumia Abu-Jamal.

Scrubbing the accusations will not work. Giving baskets of money to a local university has only ignited the debate over the company's practices, and now an attempt to whitewash any allegations of wrongdoing from a widely used public forum have been defeated. What move is next for FAU and its new sponsor?