And we think we found out where this photo came from, too. 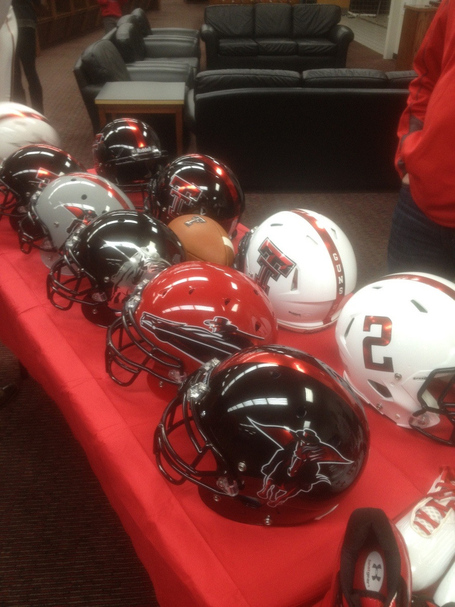 The program's primary helmets, previously unveiled in both white and black with the standard Double-T logo, will now have the player's number displayed on one side. The red stripe down the center of the helmet includes a "Guns Up" decal.

Under Armour, which supplies Texas Tech's uniforms, has also developed four alternate helmets in gray, black, black and red, and red. Two new logos of a caped red raider on horseback are used on the alternate helmets. The red helmet is the only one to use a silhouette red raider logo. The other three alternate helmets use a raider logo that would be at home on a bottle of premium macrobrew beer. One helmet design, which features a silver logo on a black helmet, does not include the essential color red. It is also the coolest of the alternate designs.

There has been no word from Texas Tech on if or when the alternate helmets will be used.

• Is UNC the next Notre Dame?

• Do you like points? Hal Mumme could land at SMU

• The Dos and Don'ts of making a recruiting highlight tape

• The List: 20 sentences guaranteed to start an Internet argument