2013 UL-Lafayette football's 10 things to know: Year of the Ragin' Cajun

Share All sharing options for: 2013 UL-Lafayette football's 10 things to know: Year of the Ragin' Cajun

The Ragin' Cajuns had won 18 games in the previous four years and had won more than eight games in a season just once since 1976, when they were Southwestern Louisiana. In two years, Hud's Cajuns have won 18 games. His teams have been exciting, athletic, fiery and exceedingly competent, making you wonder how this wasn't a nine-wins-a-year program all along.

In his last six years as a head football coach, Hudspeth has won 60 games. That he hasn't been a more serious candidate for one of the recent SEC openings is baffling, but it's great news for UL-Lafayette fans who have watched their program go from something of an afterthought to a genuinely interesting, exciting squad seemingly overnight.

I said yesterday that an extremely experienced UL-Monroe squad could conceivably be the Sun Belt favorite heading into 2013. If they aren't, UL-Lafayette probably is. Arkansas State must replace quite a few difference makers and is undergoing yet another coaching transition, and while Bobby Petrino could find personnel to his liking at Western Kentucky, one should probably assume it takes him a year to get fully rolling.

The upper half of the Sun Belt is quite impressive and interesting, and UL-Lafayette might be at the top of the pack.

3. That Florida loss was pretty stupid

The 2012 season was another fantastic one for the Ragin' Cajuns, but it could have been even better. Not only did they drop a Tuesday night ESPN game to North Texas (UNT completed a 78-yard swing pass for a touchdown with under two minutes left), but they also allowed two touchdowns in the final two minutes to Florida to go from pulling a stunner against a Top 5 team to ... losing a stunner to a Top 5 team. Tough to do. Florida blocked a punt and returned it for a touchdown with just two seconds left, and UL-Lafayette was denied a resume-defining win.

The Florida game was also the last time UL-Lafayette played particularly well on defense in the season's stretch run. Somewhere in October, the Cajuns went from playing good defense and solid offense to playing great offense and bad defense. Injuries wrecked the linebacking corps, while injuries and suspensions caused instability at safety, and the Cajuns' D faded down the stretch.

Actually, if not for the emergence of Terrance Broadway at quarterback and a steady offensive line, the offense could have been in dire straits as well after a series of injuries to running backs and receivers. But as we always say, injuries hurt in the present tense and help in the future tense. Last year's injury problems have created pretty impressive depth for 2013. 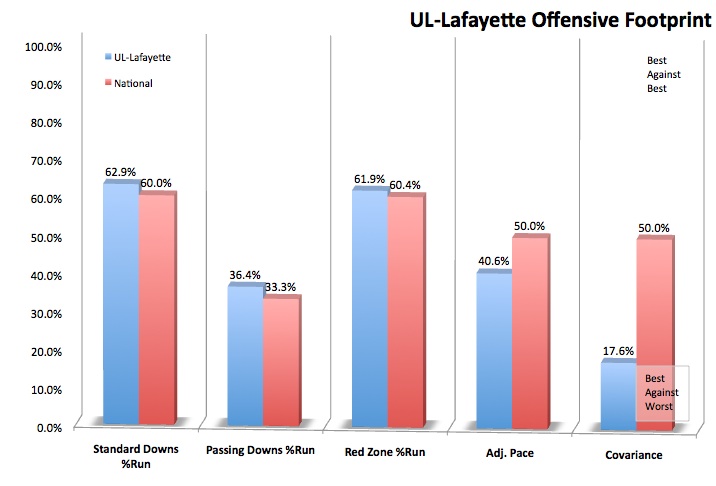 According to Off. S&P+, here were the best mid-major offenses in the country last year:

The Cajuns were reasonably efficient, especially through the air, but they made their bones with explosiveness. They averaged 14 yards per completion, Terrance Broadway was one of the most explosive rushing quarterbacks in the country (7.3 highlight yards per carry), and despite injuries and depth chart shuffling, the top three UL-Lafayette running backs at year's end had averaged 5.1 yards per carry; each averaged at least 5.4 highlight yards (the yards you gain after the line has done its job, basically) per opportunity. The top four receivers each averaged at least 9.0 yards per target, and the line opened all sorts of holes. And the team was at its best on third downs, alternating between converting third-and-manageable and pulling rabbits out of hats on passing downs. The loss of the top two receivers -- Harry Peoples and Javone Lawson -- to exhausted eligibility might hurt a little, but the next two targets on the list were just as good, on a per-target basis, in 2012, and the Cajuns add Tulsa transfer Ricky Johnson (9.0 yards per target in 2011) to the depth chart this spring.

One interesting aspect of UL-Lafayette's attack, by the way? A complete lack of pace. We think of spread attacks as up-tempo most of the time, but UL-Lafayette took what is actually a pretty underdog-friendly approach, took its time between plays, and shrank the game down. And they were still Top 30 in yards per game.

Blaine Gautier was UL-Lafayette's first bowl-winning quarterback. In said bowl win, he completed 24 of 40 passes for 470 yards and three touchdowns, took about 17 killer hits, and kept working his Cajuns down the field. He was not incredibly efficient (career completion rate: 58.5%), but he was good enough to start the season at No. 1 on the depth chart, ahead of Broadway, the exciting Houston transfer. But one-quarter of the way through his season, he was Wally Pipped. He missed the FIU game with injury, Broadway came in and completed 15 of 19 passes for 228 yards, and that was that.

In the end, if Broadway had started all 13 games, he'd have almost certainly reached 3,000 passing yards and 1,000 rushing yards. He is "hold your breath when he leaves the pocket" good, and in players like big running back Alonzo Harris and his aforementioned receiving corps, he has a lot of toys to play with in 2013. And I haven't even mentioned three-star freshmen like running back Elijah McGuire, tight end Nick Byrne or receiver Scott Austin yet.

UL-Lafayette found a level of explosiveness you rarely see in a low-risk, no-sacks offense. But it also got help from a line that was Top 40 in both Adj. Line Yards and Adj. Sack Rate. The line, which featured two second-team all-conference performers and, unlike other units, did not see any starter time lost to injury, opened big holes on standard downs, then stood up well on third-and-short. They did this despite a mobile quarterback (mobile QBs tend to run into trouble at times) and a rotating series of running backs, at least one of which was a true freshman originally recruited as a defensive back.

The line was a silent strength last year, and it could be again -- three of five starters return, two of which are two-year starters now -- but the loss of tackles Leonardo Bates and Jaron Odom, who combined for 72 career starts, could hurt. We shouldn't assume quite the same level of proficiency in 2013, but if the line can just maintain competence, good things should happen. 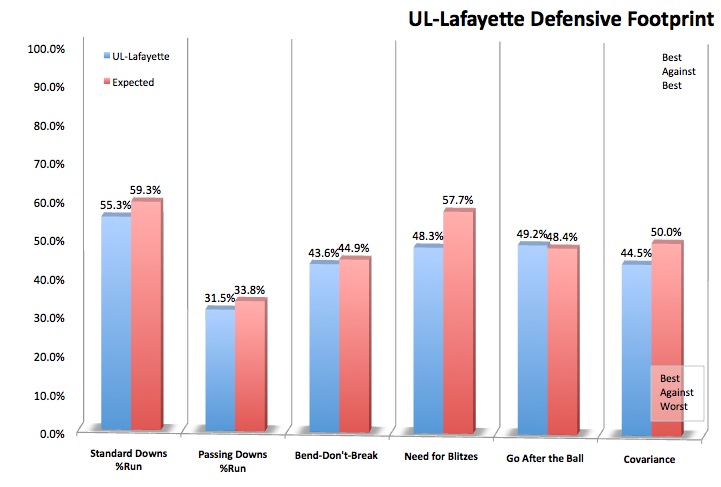 7. Raw stats give the defense a little too much credit

The UL-Lafayette offense's slow pace actually helped its faltering defense out a bit, too. The Cajuns were by no means great when it came to raw stats -- 428 yards per game, 283 through the air -- but they graded out even worse after opponent and pace adjustments. Their line was able to stand up to the run reasonably well and generate solid pressure on standard downs -- but with a mix-and-match linebacking corps just didn't get the job done, especially after Qyen Griffin was dismissed. UL-Lafayette linebackers recorded just 2.5 sacks all year, and without any threat of a blitz, the Cajuns' best option on passing downs was to form a cloud and swarm to the ball short of the chains. It worked pretty well, but the Cajuns didn't actually force enough passing downs for this to be particularly effective.

Six of the top eight linebackers return in 2013, perhaps offering a little bit of stability to an unstable position. But the secondary will look completely different this fall. Gone are both starting cornerbacks (combined: four interceptions, 18 passes broken up) and steady safety Rodney Gillis, and in are two junior college cornerbacks and three interesting freshmen. Darius "Tig" Barksdale, a former four-star recruit who landed in Lafayette after stints at Ole Miss and Jacksonville State, should expect to play a larger role, as well. The secondary was able to bail out the defense with some play-making ability, but almost all of the proven quantities are now gone -- Gillis, Jermarious Moten and Melvin White combined for 7.5 tackles for loss and 32 passes defensed; the top seven returnees combined for 2.5 and four, respectively.

9. Brett Baer will be missed

He knuckled in the 50-yarder that won UL-Lafayette the 2011 New Orleans Bowl, nailed another 50-yarder in the 2012 New Orleans Bowl, and made eight field goals of 40+ yards. There is comfort in knowing you only have to get to your opponent's 30-yard line to score some points.

10. The Cajuns will beat either Arkansas or Kansas State in 2013

We still await the 2013 Sun Belt schedule, so we don't know for sure where the Western Kentucky, ULM and Arkansas State games will be played. But there is a good chance that if UL-Lafayette can take out either Arkansas or Kansas State to start the 2013 season, the Cajuns will have a chance at 10-2 or 11-1 and a stint in the Top 25. That's how confident I am in Broadway and the offense, especially against a) an Arkansas defense that is working under a new coaching staff (and wasn't that amazing to begin with) and b) a Kansas State defense that will be breaking in almost an entirely new starting lineup.

I have a lot of confidence in both Mark Hudspeth and his squad, and I think this coming fall could be even more memorable than the last two were. Geaux Cajuns.

&bUL-Lafayette; Big East giving up name? We have suggestions

&bUL-Lafayette; The Dos and Don'ts of making a recruiting highlight tape