For the first time in three years, Miami's record and quality of play actually matched up in 2012. In a bad way. Schedule, roster, projections and more below.

Share All sharing options for: 2013 Miami (Ohio) football's 10 things to know: The wrong kind of stability

1. So where's this thing going?

The Cradle of Coaches is suffering a bit of an existential crisis at the moment. Or at the very least, the Miami football program is feeling a bit queasy after a roller coaster of a last decade. In 2003, with Ben Roethlisberger behind center and the late Terry Hoeppner on the sideline, the Redhawks went 13-1 and finished 10th in the country. It was the ninth in what would become an 11-year streak of winning seasons for the school that had made more impressive hires than almost any school in college football history.

(Who else can match this string of consecutive hires: Woody Hayes, Ara Parseghian, John Pont, Bo Schembechler? Miami began to win pretty consistently under first Randy Walker, then Hoeppner, in the 1990s and 2000s. But when Hoeppner left for Indiana in 2005, he took all semblance of stability with him.)

Since Hoeppner left, Miami has gone 7-6, 2-10, 6-7, 2-10, 1-11, 10-4, 4-8 and 4-8. In a seven-year span, the Redhawks managed to improve their win total by at least four games twice (once by nine games) and regressed by at least four games three times. That's crazy. In 2010, an amazingly lucky Miami team improved by nine games, went 10-4, won the MAC, and saw second-year coach Michael Haywood leave (briefly) for Pittsburgh. He was replaced by Michigan State assistant Don Treadwell, and the next year, an amazingly unlucky Miami team actually performed better on paper and went just 4-8.

in that sense, Miami got its first taste of stability in a long while in 2012; it just wasn't the good kind. Miami went 4-8 for a second straight year, and this time, for the first time in three years, the Redhawks deserved their record. Injury and attrition decayed the interior of the Miami defense, and it collapsed, leaving a decent, if one-dimensional, Miami offense to fend for itself. Miami lost four games by at least 25 points and lost another two by at least 14. Only an upset of Ohio and relatively unimpressive wins over UMass and Akron prevented an outright disaster.

Now, heading into 2013, the defense might be able to regain some traction, but the pressure is on. Treadwell has gone 8-16 in two seasons, and while that is nowhere near the lows of the Shane Montgomery era (2-10 seasons in both 2006 and 2008), it's still low for a proud program like this.

Miami might need to engineer a bowl run to earn Treadwell a fourth season. Can it?

In last year's Miami preview, I proclaimed that Miami might have the MAC's best defense, that the path to a MAC East title is semi-smooth, and that I was going "all-in for Miami in the MAC East." I was wrong about all of that. Terribly, terribly wrong.

3. You can see improvement if you try

In all, despite a complete lack of a running game, the Miami offense was somewhere between decent and below average.

The defense was an outright abomination, but it isn't hard to see why. In the 2012 preview linked above, I talked about how the defense might have as many as eight senior starters. It didn't turn out that way. Seemingly every tackle on the roster got hurt, the back seven of the defense was a bit unsettled as well, and the run of solid offense atop the schedule moved through Miami like a sieve. But it did improve by more than a touchdown in the last five games. It still wasn't that close to average, but improvement is improvement, 15 of the top 22 players on the defense return in 2013, and Miami actually might have some healthy tackles this time. 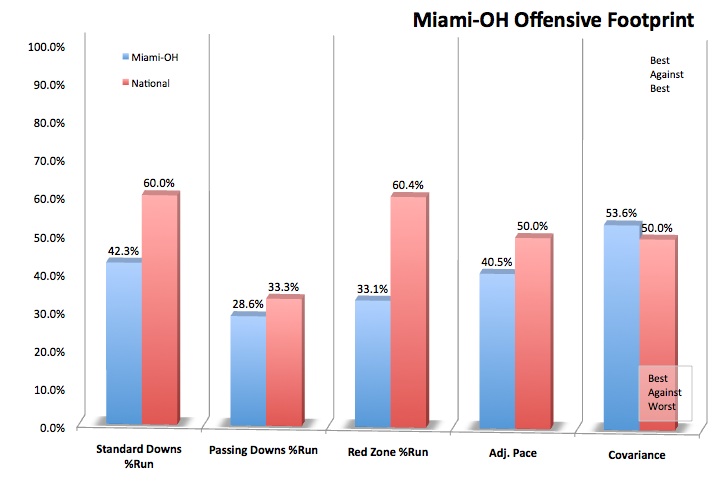 4. Does the passing downs magic continue?

You rarely see an offense rank among the bottom 15 teams in the country on standard downs and among the top 30 on passing downs, but somehow Miami pulled that off in 2012. What I've learned over time is that passing downs magic is often tied to the play of an impressive quarterback (the Colt McCoy Effect, as it were). And while some luck might be involved, as long as that quarterback is around you might be able to pull the same rabbits out of the same hat in consecutive years.

Unfortunately, Zac Dysert is gone. Dysert started for most of his four-year career, threw for 12,000 yards and 73 touchdowns, took infinite sacks, and kept figuring out ways to move the chains on second- or third-and-long. He will be replaced by one of the more proven backups in the country, but even a capable replacement will have to find the same touch with his back against the wall. There is no guarantee. If Miami is to once again field a decent offense in 2013, a drastically improved running game might be a grave necessity.

5. It only seems like Austin Boucher and Nick Harwell have been at Miami for 12 years

In Miami's terribly unlikely run to the 2010 MAC title, one that saw the Redhawks win six conference game by a touchdown or less, Dysert got hurt in November and was replaced by a freshman named Austin Boucher. Boucher threw for 333 yards and a touchdown (the game-winner with 33 seconds left) in the MAC title game upset of Northern Illinois, and another freshman, Nick Harwell, caught five passes for 66 yards. Three years later, Boucher finally gets his shot as a full-time starter, at least as long as he can fend off challengers.

But even if there is an upset in the quarterbacks race, Harwell will provide a steady No. 1 target for the new starter. He has caught 229 passes in three years (97 in 2011), and he and junior Dawan Scott will give Miami one of the better receiver duos in the MAC.

Regardless of the passing situation, though, the run game will need to improve. It was awful in 2012, and a line that wasn't very good at opening holes must replace three players who had combined for 97 starts. A little new blood up front might not be a bad thing, though, and some interesting youngsters join the rotation this fall.

Really, Coach Meyer? You couldn't find a scholarship to give to Tom Tupa's son at Ohio State? For shame... 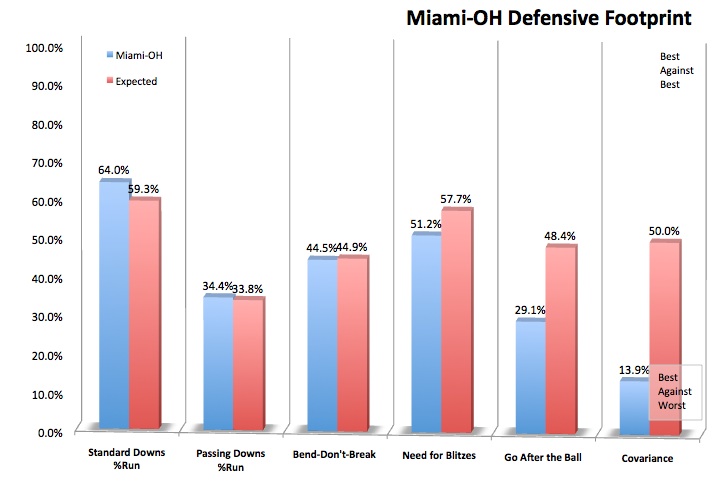 The injury bug can devastate you in two different ways. Either it can unleash program-wide destruction, thinning you out everywhere and depriving you of play-makers throughout the field. Or it can hone in on one specific area and hollow you out from the inside. It chose the latter with Miami in 2012. Let's jump back to last year's preview again for a moment.

It starts up front, where a line that ranked 11th in the country in Adj. Line Yards and 17th in Adj. Sack Rate returns four of its top five and five of its top eight and adds two three-star freshmen to boot. Three seniors lead the way -- ends Jason Semmes and Luke Kelly (combined: 50.5 tackles, 12.0 tackles for loss) and playmaking tackles Austin Brown and Mike Johns (43.0 tackles, 15.0 tackles for loss). The departure of rush end C.J. Marck hurts but can be overcome. Meanwhile, first-year tackle David Deleon and end Wesley Scott could crack into the second string alongside young players like sophomore tackle Mwanza Wamulumba.

The Miami defensive line was outstanding in 2011 and looked to be just as good in 2012. But two good tackles (Austin Brown and Mike Johns) combined to play in 10 games. Backups Mitch Winters (seven games) and Delvin Becks (two) barely played either. As a result, 245-pound freshman end Wesley Scott became 245-pound freshman tackle Wesley Scott, and 260-pound Mwanza Wamulumba became the beefiest player in the starting four. Not surprisingly, then, Miami was almost the worst team in the country when it came to preventing opportunities for running backs; Miami was 123rd in Standard Down Line Yards per carry and 122nd in Opportunity Rate (which is basically the frequency with which a line earns five yards for the runner and, in theory, breaks the back into the open field).

In theory, with Wamulumba, Brown, Winters (also tiny) and Beck back, and with three-star sophomore David Deleon ready to play a larger role, Scott can move back to end, and the pieces can fall back into place. One shouldn't expect this line to suddenly rank among the mid-major elite again, but improvement is almost inevitable.

If the line actually takes shape again, then defensive play-makers like corner Dayonne Nunley, safety Brison Burris and linebackers Chris Wade and Wes Williams can actually start to shine a bit. There is also quite a bit of potential in younger players like linebacker Kent Kern and corner Chrishawn Dupuy. Throw in some interesting freshmen and redshirt freshmen, and you've got an exciting back seven; but it will only matter if the line actually manages to hold up a bit.

Miami found a good kicker in Kaleb Patterson, and punter Zac Murphy was pretty good at inducing non-returns. But few teams produced less from their return games than Miami. In six punt returns, Dayonne Nunley and Andy Cruse gained a total of 19 yards. That's ... not good. Some new blood here would be tremendous.

Okay, so let's pretend for a moment that the Miami offense holds form -- any passing downs regression is mitigated by better performance on standard downs -- and the defense bounces back. Miami was a Top 80 team on paper in 2011, and if they can produce that level of play again, their success will be determined by an interesting slate of road opponents -- No. 79 Marshall, No. 80 Kent State, No. 83 Ohio, No. 84 Ball State, No. 88 Illinois, No. 90 Kentucky, and No. 124 UMass are certainly all individually conquerable, and with some winnable home games on the docket, one could see how a Top 80 performance could lead to at least seven wins or so. But ... what if Miami only ranks No. 100 or so?

Miami will almost certainly improve overall this fall, but whether the Redhawks improve enough to reach the postseason again will be determined by passing downs performance on offense, standard downs performance on defense, and perhaps most of all, road performance. The range of potential outcomes for this team is quite wide, but, well, that's nothing new for Miami, is it?

• Let’s have a spring football roundtable