Buffalo heads into 2013 loaded with experience and a play-making defense. If the Bulls are to return to bowl eligibility, now's the time. Schedule, roster, projections and more below.

Share All sharing options for: 2013 Buffalo football's 10 things to know: Extensions and experience

1. Jeff Quinn got himself a contract extension

You can understand fan discontent. In 2010, Jeff Quinn took over a Buffalo team that had won 18 games in three seasons after winning just 12 in the preceding eight years. Buffalo won six games per year in 2007-09 and has won just three per year since. That's not good. And when Quinn received a contract extension in November, as a 4-8 campaign was wrapping up, one had to figure Buffalo fans weren't altogether pleased. And they weren't.

Honestly? I kind of liked the move. It's true that Quinn still had two years left on his deal and was therefore not yet entering "lame duck" status. But it's also true that, after bottoming out in 2010 (2-10, No. 110 in the F/+ rankings), the Bulls improved in 2011 (3-9, No. 103), then improved again in 2012 (4-8, No. 92). Most programs are not in a place to fire somebody after two consecutive years of improvement unless they know they can get somebody better; Buffalo probably can't. In extending Quinn's deal, Buffalo was essentially saying that it sees what's ahead in 2013 -- an extremely experienced, rather interesting UB squad facing a MAC in transition -- and likes it. Progress has been both undeniable and slow, but the faith in Quinn could pay off in 2013.

(And if you want to question what the core of talent will look like after 2013, after a couple of years of pretty horrid recruiting rankings, go ahead. I only kind of liked the extention, after all.)

2. There are two ways to win in the MAC

Teams that win big in the MAC have either a breakthrough talent (probably at quarterback) or the most experienced squad. It is difficult to compile more experience than what Buffalo will have in 2013: two experienced starting quarterbacks (each of whom threw at least 160 passes last year), a solid pair of running backs (and an interesting junior college transfer), an interesting No. 1 receiver, 72 returning starts on the offensive line, and an aggressive 3-4 defense that returns eight starters, including linebacker Khalil Mack, who has amassed at least 20 tackles for loss in back-to-back seasons.

In all, Buffalo returns 17 starters -- a total that all but guarantees improvement -- and its entire special teams unit (which, honestly, might not be a good thing, but still). Quinn has been building with an eye on 2013 for a while now, and if the team stays healthy and grows as projected, the Bulls should expect to return to a bowl for the first time since Turner Gill's 2008 Bulls won the MAC.

3. Three seasons in one

Over the final seven games of the season, Buffalo had one of the best mid-major defenses in the country. The Bulls were aggressive on all downs, and it looked good on them. Of course, having wrecking ball Khalil Mack at outside linebacker didn't hurt, but he got plenty of help. The offense, meanwhile, just couldn't quite fall into place. Quarterback Alex Zordich was competent, if scatter-shot, but results were sporadic, and he missed the final four games of the season with injury. His replacement, Joe Licata, wasn't any more accurate. In the end, Buffalo had a decent run game, a good line, and a couple of interesting receivers, but the passing game was just too inefficient, and it became more so as the year progressed. But that defense ... you can talk yourself into Buffalo because of the defense alone. 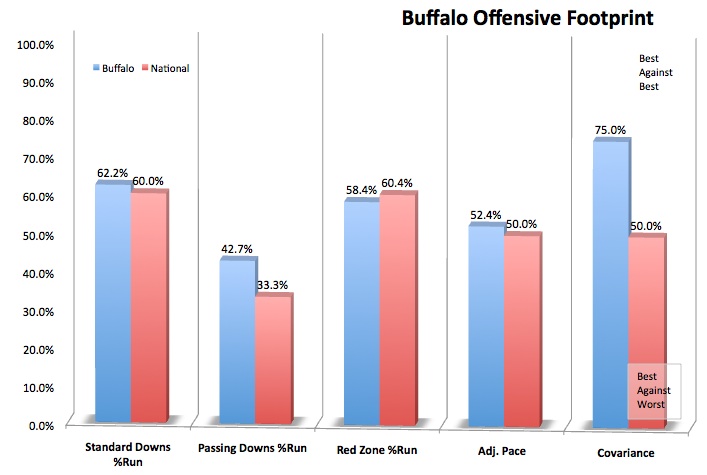 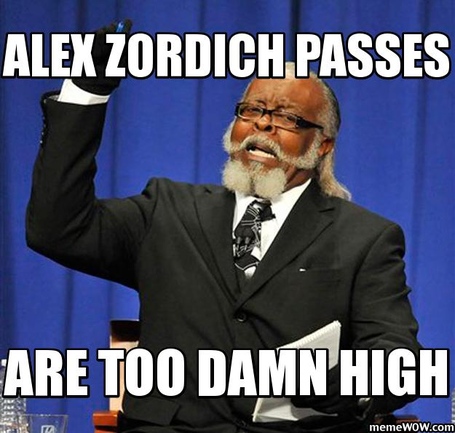 Alex Zordich looks the part. He's the proper size of an NFL quarterback, and he's a solid runner. But as the UB Bull Run meme above would suggest, he's got a bit of an accuracy problem.

In three starts as a freshman in 2010, Zordich completed just 41 percent of his passes, and while he absolutely improved in 2012 -- 14-for-24 against Georgia, 18-for-29 against Northern Illinois, 23-for-41 against Pittsburgh, 16-for-21 against Morgan State -- his low notes were still awfully low. In a 23-7 loss to Kent State, he had a rather unfathomable passing line: 4-for-22 for 92 yards, a touchdown and two picks. If you count his interceptions as completions, it still only raises his completion rate to 27 percent. Brutal. He also completed just 13 of 30 against UConn and five of 16 against Toledo.

Now, it's probably unfair to stick this all on Zordich. First of all, his replacement, Licata, really didn't fare any better when Zordich was hurt. Licata's completion rate was slightly higher but was more than mitigated by his propensity for taking sacks. That suggests that the receiving corps also left something to be desired. Despite two different quarterbacks, none of Buffalo's top six passing targets managed a catch rate better than 58 percent. That's not good.

Buffalo wants to lean on the run as much as possible, and with Zordich carving out yards alongside backs Branden Oliver and Devin Campbell, that could be a good thing. But they'll need to pass at some point. Can they?

5. If the quarterback position is capable, things fall into place

Whoever wins the starting job -- be it Zordich, Licata or a third-party candidate -- inherits a strong backfield, a solid line (the left side of it, anyway) and a receiving corps that is, at least, quite a bit more experienced than it was last year. Junior college transfer James Potts joins the party at running back, Alex Neutz is a big-play threat in the No. 1 receiver spot, and some interesting youngsters could carve out a niche in the passing game. Two-year starting left tackle Andre Davis returns, and while the line must replace two starters on the right side, experienced former starters are available to replace them. There are plenty of reasons to assume Buffalo's offense will improve in 2013, but the velocity of the improvement will be determined by the reliability of the quarterback. 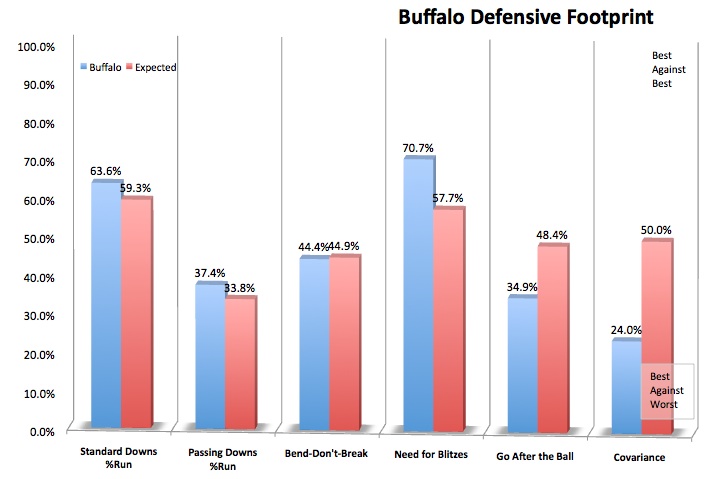 6. Buffalo was rock solid in the trenches (on both sides of the ball) in 2012

7. Khalil Mack is a badass

Sometimes you uncover the proverbial diamond in the rough. As a recruit, Khalil Mack barely even garnered a two-star rating. But in three years, he has been one of the most terrifying mid-major defenders in the country. As a redshirt freshman in 2010, he was better than most upper-classmen, logging 14.5 tackles for loss and 4.5 sacks. In 2011, he raised his game: 20.5 TFLs, 5.5 sacks. And despite constant attention from opposing offenses, he somehow improved his stats again last fall: 21.0 TFLs, 8.0 sacks. He gets special attention and still thrives, and that (not surprisingly) does wonders for the players around him. Lee Skinner and Jake Stockman combined for another 12.5 TFLs from the inside, and returning end Colby Way had 10.5. Buffalo's pas rush was strong enough that opponents had to run to move the ball, and over the final two months of the season, Buffalo was equally strong at defending that. UB does have some losses to deal with in its front seven -- on the first string of the line and the second string of the linebacking corps -- but Mack and company should still expect to make a lot of stops in 2013. Two months of sustained improvement in 2012 suggests very good things about 2013.

Buffalo had its moments in special teams -- the Bulls blocked two PATs versus Toledo, turned the UMass game around with a blocked punt, and got steady play from kicker Patrick Clarke all year -- but the unit was still lacking overall. Punt and kick coverage was dreadful (suggesting that there was not much athleticism on the team beyond the first string, since the coverage units are typically made of reserves), and the return men were lacking, too. This probably isn't going to change in 2013, but some more timely blocked kicks would certainly mitigate some of the damage here.

The folks at UB Bull Run are calling for 7-5 (6-2) against the above schedule. That may seem like a lot for a team that has won seven games in the last two years, but if it's going to happen, it's going to happen in 2013. Most of this team's difference-makers -- Mack, Oliver, Neutz, etc. -- are seniors. We don't know if a new window of opportunity will open for Quinn in 2014, but this one closes soon.

10. Buffalo should meet those expectations

Honestly, after a couple of blood-lettings against Ohio State and Baylor to start the year, the Bulls should have a chance in almost every game they play, aside from perhaps the trip to Toledo. A mature team with an interesting defense, Buffalo should expect at least six wins and bowl eligibility in 2013; anything less than that will represent a terrible missed opportunity and make that Quinn extension look awfully misguided.