Kent State returns star power in Dri Archer, Trayion Durham and Roosevelt Nix. But turnover in both the coaching staff and on the field should ensure a slow start for the Golden Flashes in 2013. Schedule, roster, projections and more below.

From the time Dennis Fitzgerald left town in 1977 (after seasons of 8-4 and 6-5) until the start of 2012, the glory days for Kent State football basically consisted of that one year where Glen Mason got them to 7-4 and then left (1987). In that span of 35 seasons, Kent State had a winning record twice, and won one or fewer games in a season 10 times. The program that gave Don James his first head coaching job and produced players like Jack Lambert and future coaches like Nick Saban and Gary Pinkel in the 1970s was a football wasteland for most of the last three decades, and while Doug Martin (head coach from 2004 to 2010) came really, really close to breaking through (5-7 with a pretty good defense in both 2009 and 2010), he never did.

Darrell Hazell, who coached under Jim Tressel at Ohio State from 2004-10, took over in 2011 and did not waste time putting together Kent State's best team in 40 years. His 2011 squad began the season 1-6 with three tight losses, but the Golden Flashes caught fire, winning 15 of their next 17 games, steadily improving on defense and figuring out how to run the ball really, really well.

Kent State headed into the 2012 MAC title game with an excellent shot at a BCS bowl bid; they lost both the conference title and the Orange Bowl slot in overtime to Northern Illinois, then lost Hazell to Purdue and the GoDaddy.com Bowl to Arkansas State, but that's really beside the point. This program, which hadn't won 11 games in a two-year period since 1986-87, went 11-3 and reached the doorstep of a BCS bowl. That's incredible.

Succeeding Hazell, then, is a monumental, almost impossible task, one that falls to another TresselBaller. Paul Haynes spent seven seasons (2005-11) in Columbus, mostly as Tressel's defensive backs coach, and after a year at Arkansas, he returns to Ohio to see if he can navigate a Kent State program that, for the first time in most of our lives, has an actual track record and expectations.

Eventually, you become your record. That's the hope for any team that is putting wins on the board but not looking particularly impressive in doing so. Riding into 2012 after a hot finish to 2011 (they won four in a row before a season-ending loss to Temple disrupted a shot at bowl eligibility), with reasonably hopeful expectations (I called for a bowl bid), the Golden Flashes were anything but impressive early. They showed gaping holes on defense in allowing 21 points to Towson and, more egregiously, 47 points to Kentucky. But they survived a trip to Buffalo and outlasted a Ball State team that was better than we knew at the time, and slowly but surely, unimpressive wins turned into pretty damn impressive wins.

By the time Kent State headed to face undefeated, 18th-ranked Rutgers on October 27, the Golden Flashes were becoming a confident, interesting team with an above-average offense and a defense that was beginning to show the form it was supposed to show. Against Rutgers, they picked off two first-half passes, returned one for a touchdown, built a 28-10 lead midway through the third quarter, then just kept right on forcing turnovers. At the end of the game, they had forced seven (six picks and a fumble), running backs Trayion Durham and Dri Archer had combined for 210 yards in 40 carries against a good defense, and KSU had knocked off a Top 20 opponent, 35-23. And then they started to become their record. They handled Miami (Ohio) and Bowling Green on the road, then just dominated a decent (and banged up) Ohio squad, and despite being outgained significantly, they came oh so close to winning the MAC.

On paper, this team was good but not great; it ranked just 48th in the F/+ rankings, but over the last half (or so) of the season, it was a legitimate Top 25-35 squad. It survived early and thrived late. You'd rather dominate all year, but it doesn't usually happen that way. 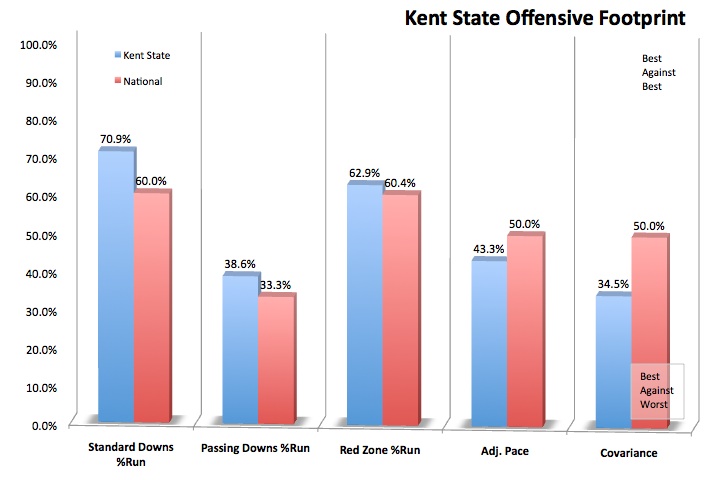 3. Where did you come from, Dri Archer?

A recruiting after-thought, a two-star recruit from Laurel, Florida, brought to Kent by Doug Martin, Dri Archer averaged just 3.9 yards per carry in 2009-10 and didn't play in 2011, Hazell's first year in charge. He had shown potential as a kick returner and had scored four touchdowns through the air, but there was absolutely no reason to think that Archer was the key to a sudden offensive breakthrough for a team that hadn't scored even an average number of points since 2004. But he was an outright revelation, a part-time running back, part-time slot receiver and perfect complement to punishing power back Trayion Durham in the Kent backfield.

A player like Archer is why the Highlight Yardage measure was created. The idea of highlight yardage is to attempt to separate credit for yards between a line (full credit given for the first five yards or a loss, 50 percent credit given for up to five yards beyond that) and a runner (everything else); basically, anytime the line did its job and opened up space for Archer, he averaged a gain of almost 12 yards on his own. That's absurd.

In somewhat open field, Archer, a complete unknown heading into 2012, was the most devastating runner in the country. And he chose to return for his senior season, which means great things for a skill position lineup that also returns Durham (as the thunder to Archer's lightning), four of last year's top five receivers (including Archer).

4. The passing game has almost no choice but to improve.

You have to give it to Spencer Keith for this: the Kent State quarterback came up big at big times. He threw for three touchdowns in the tight win over Ball State, he was mistake-free (14-for-21 with two touchdowns) against Rutgers, and he led a couple of perfect, long scoring drives in a fourth quarter comeback against NIU in the MAC title game. But he was also limited, completing 56 percent of his passes in four years as a (mostly) starter and throwing 40 interceptions alongside his 45 touchdown passes. He was the quarterback of Kent State's best team in 40 years (and either best or second-best ever), and that means something. But Kent State ranked 113th in Passing S&P+ in 2012; that also means something.

In minimal action, likely 2013 starter David Fisher, a well-coiffed senior who came to Kent State via Palomar Community College in San Marcos, California, acquitted himself perfectly fine. He completed seven of 13 passes (with a pick) versus Buffalo and completed five of six combined (for 117 yards and a score) versus Towson and Eastern Michigan. We don't know what he'll do in a full season of work, but with a low bar and a receiving corps that combines experience with higher-upside youth (quite a few intriguing freshmen and/or redshirt freshmen could work their way into the rotation), it's hard to imagine he can't at worst duplicate Keith's effort.

5. Holes on the line

So Archer and Durham return, and the passing game should expect to improve at least marginally. That's good. Less good: The line must replace two three-year starters and a four-year starter. Brian Winters, Josh Kline and Kent Cleveland had combined for 124 career starts by the end of last year, and despite the fact that the line still returns four players with starting experience (39 career starts), it's hard to imagine Kent State avoiding a dropoff here. This was a pretty good line that made life easy for Archer, Durham and Keith in 2012; the line will at least need to find competence to keep the engine rolling. 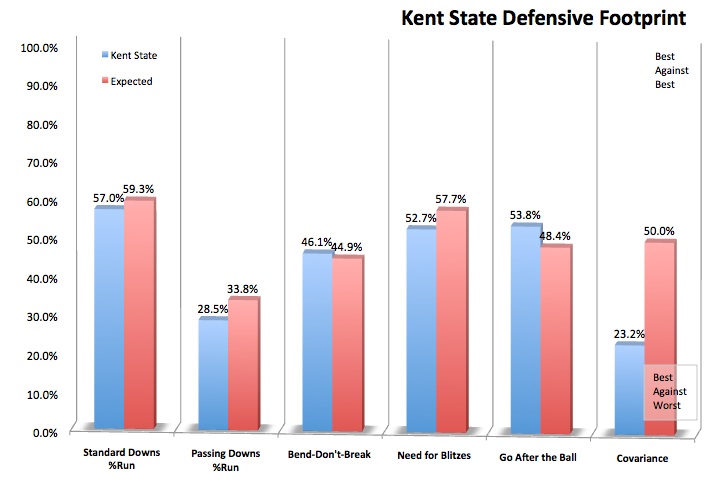 6. If Kent State had a step on you athletically, you were toast

Covariance gives us a hint regarding which teams played best against lesser opponents and which raised their games against better teams. Kent State was more the latter; the Golden Flashes were dominated statistically by Kentucky and Northern Illinois, two of the more athletic teams on the docket, but took full advantage of lesser offenses. The TresselBall ethos relies on superior defense, and Kent State's has been mostly strong in recent years. We'll see if that continues now that the head coach has changed. The Golden Flashes were particularly good when given time to plan -- they were great in the first quarter and good in the third but pretty poor in the second and fourth -- strong depth and youth could help them as a half progresses in 2013.

7. Roosevelt Nix is still one of the most interesting players in college football

Looking at stats alone, one would think that Roosevelt Nix is a mid-major Ndamukong Suh. From the tackle position, he has logged an incredible 52 tackles for loss in three seasons at Kent State, logging at least two in a game 14 times in his career. He is as disruptive a force as one will ever see from the tackle position. He's also 5'11, 245 pounds. The average lettering linebacker at Alabama is 6'3, 245.

It is amazing that he has had this level of success, even at the mid-major level, and while it makes sense that a lot of his best games have come against teams with inferior athleticism -- 4.0 tackles for loss versus Towson in 2012, 4.0 versus Eastern Michigan in 2011, 3.5 versus Akron and Bowling Green in 2010 -- he still serves as the face of an aggressive, disruptive defense as a whole. He has a chance to reach 70.0 tackles for loss in his career, which is a video game total and is made more amazing by the fact that this will be his third head coach in four years.

8. Depth: the Golden Flashes have it

Now, these young guys have to prove that they can produce when given more responsibility, but they proved quite a bit in limited action last year, and that's all you can ask for in advance.

Kent State and Buffalo were reasonably similar on offense and defense last year. Kent State was certainly better, mind you, but not by as much as their respective records (11-3 to Buffalo's 4-8) would suggest. A big difference came on special teams, where Kent State was destructive (second in the country) and solid while Buffalo was just ... self-destructive (119th). It probably makes sense, then, that in the regular season Kent State went 2-0 in one-possession games (and 9-1 in games with a larger margin), and Buffalo went 2-3 (and 2-5). The Golden Flashes will have to replace Freddy Cortez, who was good on kickoffs and automatic inside 40 yards on place-kicks, and their punt return game could stand to improve. But with the return of Archer and punter Anthony Melchiori, the components are in place for another explosive, TresselBall-friendly Kent State special teams unit.

10. The encore will be acceptable

Kent State is not going to win 11 games in 2013. The Golden Flashes will be both breaking in new starters on defense (and on the offensive line) and getting up to speed with a new coaching staff, and most of their tougher games come in the first half of the season (at LSU, at Penn State, Northern Illinois).

A relatively slow start is reasonably likely, but the back half of the schedule is loaded with marshmallows, and a team built to improve as the year progresses should roll through most of them. I think a return to bowl eligibility and a potential 7-5 or 8-4 record is likely. That should always be suitable at Kent State, no matter what happened last year.