2013 Ball State football's 10 things to know: A track record and some turnover

Ball State's Pete Lembo might be one of the more underrated coaches in the country. He has churned out 11 winning seasons in 12 years at three different schools. He will probably make it 12 in 13 this fall.

Share All sharing options for: 2013 Ball State football's 10 things to know: A track record and some turnover

The Ball State head coach has taken on three incredibly disparate coaching jobs -- the "no scholarships, but high expectations" Lehigh job, the "building something from nothing" Elon job, and now the Ball State job. And in 12 years as a head coach, he has experienced one losing season.

He inherited a nice Lehigh program from Kevin Higgins, went 11-1 in his first season, and won at least eight games in each of the next four years. At Elon, he inherited a Southern Conference program that was all-potential, minimal-production; the Phoenix had gone just 14-42 in the five years before his arrival. He went 5-6 in Year 1, then reeled off four straight winning seasons and a 2009 FCS playoff appearance. And at Ball State, he inherited a team in serious flux. The Cardinals had gone 12-2 in 2008, Brady Hoke's final year in charge, but they went just 6-18 in two years under Stan Parrish. Lembo engineered an immediate, two-game improvement in 2011, then reeled off a surprising 9-4 season in 2012.

In just over a decade, Lembo has won, and won pretty big, in the Patriot League (northeastern, with mostly need-based aid for players), the Southern Conference (an FCS powerhouse), and the MAC (a midwestern mid-major).

"One stat that one of my assistants threw at me recently: There are only seven head coaches that have won nine or more games at three or more schools," Lembo told me. He's one of them.

Nobody thought much of it when Ball State hired him two years ago ("To satisfy the constituent base, it's easier to say you just hired a Notre Dame assistant" instead of an FCS guy, Lembo says), but he has done impressive things in a short amount of time.

There isn't much flash to Lembo's style or his team.

"We don't have big egos, and we're not self-promoters," he said. "But we do believe in what we do and how we do it. It always gets back to culture, to organizational behavior. If the coaches are unified and have great chemistry, and if they keep their composure in close-and-late situations, when it's stressful, and there's a lot at stake, then it trickles down to the team."

It's kind of boring, really, but Ball State's improvement has been anything but. The Cardinals ranked 112th in the 2010 F/+ rankings, improved to 95th in 2011 and surged to 65th in 2012. Keep that up, and he'll soon get a chance to win nine games at a fourth school, this time in a BCS conference.

In essence, Ball State was the Kansas State of mid-majors last year, dominating the special teams and field position battles, finishing drives (as you see below, their red zone rankings were better than their overall offensive rankings), taking few chances, and proving more than happy to let opponents shoot themselves in the feet. The Cardinals' offense was quite efficient, if short in big-play ability, the offensive line was fantastic, and while the defense was lacking, there was usually a cap on its struggle; BSU's D was usually below average but rarely catastrophic.

Ball State also improved as the year progressed, at last until the last couple of games.

The Cardinals managed to take out Indiana and South Florida without playing particularly well, then played pretty well in losses to Kent State and Northern Illinois. The offense was magnificent against Ohio then mediocre at best in the final two games, but the defense continued to steadily improve. 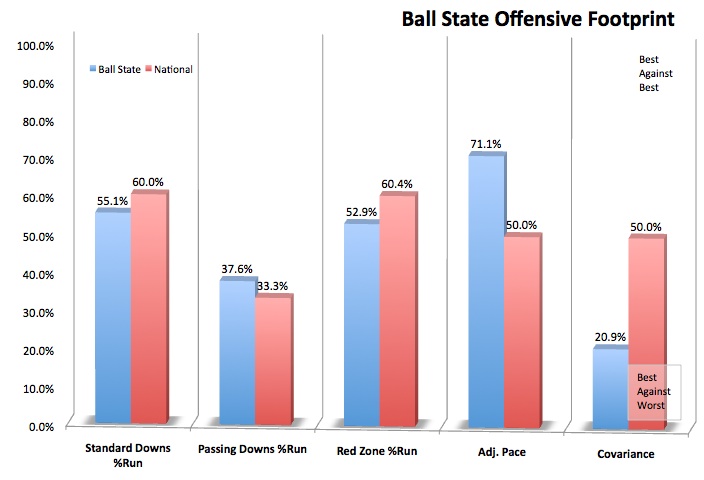 Ball State was lacking in explosiveness in 2012, but the Cardinals got a little crafty in moving the ball. They threw more than normal on standard downs, they ran more than normal on passing downs, they passed in the red zone, and they operated at an abnormal pace (in this case, a fast one). Ball State was far from predictable, checking off quite a few Underdog Tactics boxes in the process.

Craftiness is great. Explosiveness is better. With Jahwan Edwards and Horactio Banks running behind an excellent line and Keith Wenning completing a host of high-percentage passes (often on running downs), Ball State was excellent at grinding out five yards at a time. But in college football, big plays create margin for error, and the Cardinals were lacking in this regard. Edwards was not particularly explosive (6.1 yards per carry is good, but it was based a lot on the line), and Wenning averaged just 10.3 yards per completion. None of Wenning's top four targets averaged even 13 yards per catch. This is, of course, a problem.

That most of BSU's skill position weapons return is certainly not a bad thing. But if a youngster with big-play ability were to emerge -- the best candidate is probably sophomore receiver KeVonn Mabon, last year's No. 5 target, though some redshirt freshmen (receiver Efe Scott-Emuakpor, perhaps) or freshmen (running back Teddy Williamson?) could certainly play a role -- the offense's upside might rise enough to offset the downside of a line ravaged by graduation.

Smith carries a pretty big load for the offense, too; he averaged 8.5 touches (carries and targets) per game in 2012 and returned 33 kicks and 11 punts. He is probably better as a return man than a receiver, but his shiftiness is valuable to this efficiency attack.

Ball State's line ranked eighth in the country in Line Yards per carry on standard downs and ranked third in Stuff Rate (the ability to avoid getting a runner stuffed in the backfield). It kept Keith Wenning upright, as well (though the quick passing game is pretty naturally good at sack avoidance).

It was quite obviously the biggest strength of the offense as a whole, and it must now replace four multi-year starters. Austin Holtz, Cameron Lowry, Dan Manick and Kitt O'Brien combined for 139 career starts; all four started at least 32 games, or more than two and a half seasons. It is nearly impossible to suffer this kind of loss and avoid regression to some degree. Returning guard Jordan Hansel is a two-time all-conference selection, and three other returnees have gotten a little bit of starting experience. And size certainly won't be an issue here. But wow, did this unit lose a lot. 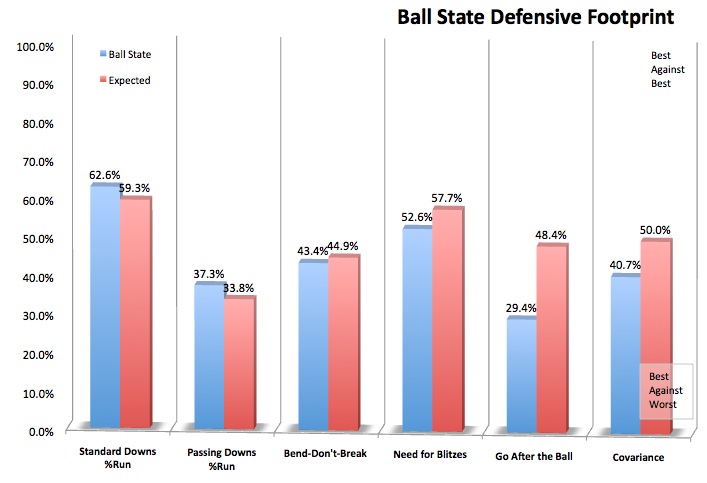 As big and strong as the Ball State offensive line will be, the defensive line could use a bit more of a push. The Cardinals got shoved around up front on defense, and it cost them significantly. The pass rush had potential -- Ohio State transfer Jonathan Newsome had 8.5 sacks -- and Ball State's linebackers cleaned up quite a bit of messes. But the top three linebackers are all gone, and the safety net has been removed.

Is it better to lose an equal number of contributors at each unit on the field, or would you prefer to return most units intact and have to focus on a couple of specific, ravaged units? Ball State returns almost everybody of importance at quarterback, running back, receiver, on the defensive line, and in the secondary. But wow, did the offensive line and linebacking corps get ravaged. Ball State's linebackers were underrated last year -- only one (Travis Freeman) received any sort of all-conference honor (second-team), but the linebackers clearly helped the run defense out tremendously: the Cardinals' line stats were poor, but they still ranked a healthy 60th in overall Rushing S&P+.

Now, a lineup consisting of senior Kenneth Lee (who began his career at tiny St. Joseph's College in Indiana), a host of young reserves, junior college transfer Stephan Martin (who redshirted last year) and potentially some freshmen will attempt to provide the same type of safety net Ball State benefited from in 2012.

9. A reload on special teams

Like Kent State, Ball State did itself serious favors with an altogether lovely special teams unit. Kickoffs were an issue, but the Cardinals were tremendous in the punting and return games and sufficient in the place-kicking department. But with both punter Scott Kovanda and kicker Steven Schott gone, there is a bit of a rebuild going on. And with how much field position meant to BSU in 2012 -- the Cardinals ranked 23rd in Field Position Advantage and fifth in Special Teams F/+ -- the loss of these two could mean as much as the losses on the line and at linebacker.

10. Another October surge would be welcome

Last year, Ball State found its groove in late-September and cruised through October and much of November. It will be a little more difficult to do that this time around; after a light September that features four opponents projected 103rd or worse, Ball State's schedule features a season-defining stretch: Toledo, at Virginia, Kent State, at Western Michigan. Go 3-1 or 4-0 here, and you're potentially heading into November as the favorite in the MAC West. Go 1-3 or 0-4, and your bowl hopes are on life support.

Over the past 12 years, Pete Lembo has ground out winning season after winning season, and I expect him to do so again in 2013. The attrition on the offensive line and in the kicking unit is particularly worrisome considering how important those two units were to Ball State's success, and because of that I don't see BSU putting together a serious threat to win the MAC West. But with a positive home schedule and winnable road trips to North Texas, Eastern Michigan, Western Michigan and Akron, bowl eligibility is likely. Plus, I'm willing to bet on proven track records.

• Do spring stars pan out? Looking back at last year's standouts