If NFL free agency was like college football recruiting: A cautionary tale

What would happen if an NFL free agent had to go through the college recruiting process to sign?

Share All sharing options for: If NFL free agency was like college football recruiting: A cautionary tale

Matt Stafford is the quarterback of the Detroit Lions. He has two years remaining on his contract, which keeps him out of the rigmarole of free agency this spring. He is enjoying the offseason at his palatial estate in Grosse Pointe, lounging on the couch and watching Storage Wars, when his phone beeps.

It is a text message from an unknown number: "Whats up Staff Dogg LOL"

Stafford ignores the text message. It was probably a wrong number, or a fraternity prank perpetrated when someone found his number in a deep dive through Google. He takes a sip of his Diet Coke and goes back to his program.

Stafford again ignores it. The area code matches Denver, but that's probably coincidence. Heck of a prank, tho--

Stafford finally relents and calls the number. On the other end of the line, John Fox picks up.

"I just wanted to gauge your interest in joining the DENVER BRONCOOOOS! Eh? Eh?"

"John, I have two years left on my contract."

"Of course you do, of course you do. I'm not asking for a commitment to join Denver today, Matty! I'm just asking if you would be interested in joining us in 2015."

"I honestly haven't thought about it."

"And you shouldn't. Enjoy your last couple of years in Detroit. Work hard in class. Hang out with your friends. Go to prom. Just know that we'll be paying attention, and that we're definitely interested when you're done in Detroit and ready for the next level."

Many of the coaches reply with a knowing wink, or at least a winking emoticon.

The next summer, Stafford takes a weekend away from the non-stop text messages, form letters, and phone calls from head coaches at other teams and goes to his multi-million dollar house on a remote lake in northern Michigan. The quarterback is now getting six or seven phone calls a night from coaches, most of which want an hour of his time. He gives them five minutes if he's feeling generous, but he refuses to let any of them know who has a chance of signing him in free agency the next year. Stafford tells them he wants to keep his options open and look for the best offer. Many of the coaches reply with a knowing wink, or at least a winking emoticon.

Stafford is sitting in an Adirondack chair on his dock reading a book when a man in a cowboy hat pulls up in a moderately-sized ski boat. He mumbles something about trying to find some gas, but both men know it's merely pretext to a conversation. "You're Matt Stafford, aren't you?" asks the man in the cowboy hat. Stafford confirms.

"You wanna go for a ride, son?" asks the cowboy. Stafford grudgingly accepts his offer.

The two men spend the next few hours on the water. The cowboy offers Stafford a beer, and the quarterback graciously pops the top on a can of American macrobrew. The man is unobtrusive, skirting conversation of Stafford's impending free agency choice while never really moving away from the subject. After a couple of hours, the man takes Stafford by a modest cabin less than half the size of Stafford's. "You see that cabin?" he asks.

"What if I told you that you could have this boat and that cabin any weekend you want?"

"I would tell you I already have a giant lake house and a 65-foot yacht."

The cowboy is impervious to the discrepancy in house and boat size, as if he couldn't hear Stafford's dismissal. "All this can be yours," he says, "if you just sign with the Minnesota Vikings."

"You really can't bribe me," Stafford replies. "I'm scheduled to make the GDP of Malaysia next season."

Three years later, the cowboy poisoned the only tree left in Detroit and told a Chicago radio show he was responsible, adding "woooOOOOOOOOO" like he was playing a Viking horn.

It was the second day of free agency, and Matthew Stafford had made up his mind: He would stay close to his home and play for the Lions. He had discussed the pros and cons of each team with his family, spent many restless nights contemplating his future in football, and was at peace with his decision. That morning, he called his head coach and told him, "I'm ready to sign a contract. I want to be a Lion for the next four years."

A massive cheer went up in the room, followed by nine grown men growling like lions for more than a minute.

"I said I want to be a Lion for the next four years."

A massive cheer went up in the room, followed by nine grown men growling like lions for more than a minute. Stafford found it absurd, but he didn't care. The decision was made. The contract would be in his hands that afternoon. The phone would stop ringing.

"Now Matt, I want you to know I trust you and I believe you are committed to the Lions. I'll keep calling just to make sure you're not wavering."

"You can't sign yet," Schwartz said. "Everyone signs on the last day of free agency, and until then you can just promise us you are going to sign, and you can change your mind at any time."

Stafford never meant to break his pledge, but temptation got the better of him. That temptation came in a sweatshirt and a bunch of championship rings and a steely demeanor, but it wasn't just Bill Belichick and the New England Patriots that weakened Stafford's verbal commitment. It was the lack of drama. Sure, the calls kept coming from the coaches -- day and night, over and over, relentless -- but the free agent scouting services quit checking in with him, quit asking for his favorite teams. One of them even took a star away from his four-star rating, claiming his arm wasn't as strong as expected. As soon as Stafford reopened his commitment, everything -- the press, the accolades, the fourth star -- returned.

On the final day of the free agency period, Stafford set up a card table in the cafeteria of his house -- yes, his house has a cafeteria -- and found his nicest plastic tablecloth. He put on an ill-fitting suit jacket and carefully placed nine Reebok NFL hats on the table, each identical in style to the other. He then sat and waited for the red light on the camera to come on. 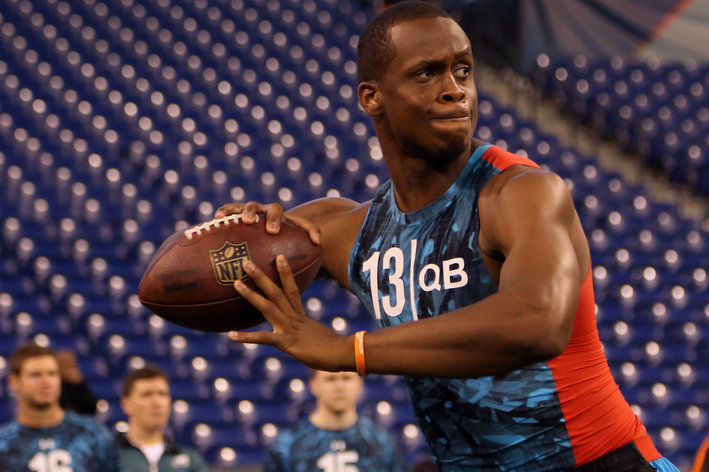 West Virginia quarterback Geno Smith impressed observers with his pro day workout, and there were more than a few NFL decision makers on hand to see it. Has he played his way into a top spot in the 2013 NFL Draft?

He had long since stopped considering Detroit, but he left their hat on the table as a sign of goodwill to the local team. The other hats were the NFL's elite: Baltimore, Green Bay, New England, San Francisco. He knew what the choice would be, but he wanted all of those choices on the table nonetheless as symbols of his ability. This was his time, and he was going to use it.

He began talking, thanking his family, friends, teammates, and soon-to-be former city for their support. It takes a village, he said. He quoted "Free Bird". He told a humorous anecdote about meeting Rex Ryan. And then he picked up the Baltimore hat, opened it up, put it to his head...and threw it aside. He laughed. Nobody else seemed to find it funny. He had planned on doing this with all nine hats, but this first rejoinder sobered him to the prospect of further hijinks. He picked up the Dallas hat and put it on. He would be a Cowboy. He grinned into the lens and basked in the glow of the moment.

The camera had long since turned off. The kid in the A/V club screwed up the microphone connection so that nobody could hear what Stafford was saying, and ESPN had long since switched to Tim Tebow announcing that he was headed to Canada.

On the day that Matt Stafford signed with the Dallas Cowboys, head coach Jason Garrett called quarterback Tony Romo into his office. Before Garrett could even say a word, Romo asked, "Does this have anything to do with the mute guy who I just saw on television?"

"Yes, Tony," Garrett responded. "That is Matt Stafford, and he is taking your job."

"You're being put on medical scholarship, actually. We'll need you to limp around, maybe hold your low back occasionally or something. Just act hurt and you can keep getting paid off the books."

Romo and Garrett wrapped up their meeting, and Garrett called his new quarterback on a speakerphone, surrounded by his assistant coaches.

Garrett and his assistants responded by making ricochet noises and shooting imaginary guns in the air.