College football's 68-team 2013 Madness bracket, if such a thing existed

Let's say all Division I college football teams, FBS and FCS alike, got to compete for a single national championship. Here's what that could look like.

Share All sharing options for: College football's 68-team 2013 Madness bracket, if such a thing existed 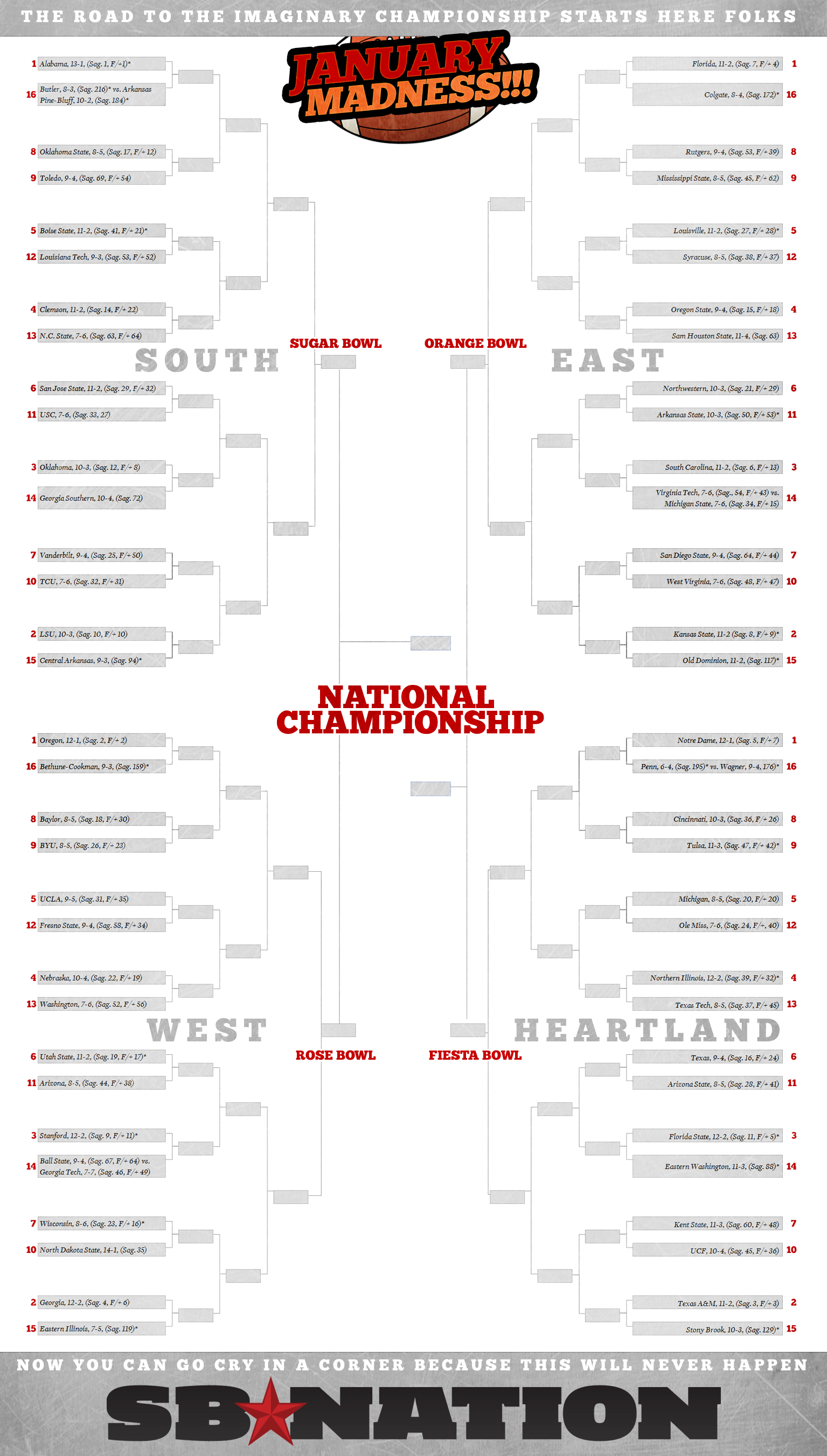 FBS football is getting a four-team playoff, and the FCS already has an ever-expanding tournament. Naturally, March Madness means it's time to make a 68-team college football bracket based on the 2012 season.

In an ideal hypothetical world, this would be hypothetically replacing bowls, but it was too hard to imagine that didn't happen, and Sagarin and F/+ already factor bowls in. It's a post-bowl tournament. And Ohio State, Penn State, Miami, and UNC are still ineligible here.

After including all FBS and FCS conference champions (even the ones who don't usually participate in the FCS playoffs), we looked at the same things the basketball selection committee does, basically. For starters, all teams had to have winning records.

By far the most important factor here were quality wins and losses. It's pretty much that way in basketball as well, but with the short length of the season, it's even more important here.

As for computer numbers, the NCAA's basketball committee uses the flawed RPI as a big factor, but is leaning more towards sets that utilize margin of victory and defeat, like Ken Pomeroy's numbers. We used the Sagarin and F/+ rankings to help with these rankings, although there's a bit of a hypothetical snag here, as those numbers include bowls and FCS playoff games. Using post-bowl numbers still gives us the fullest idea of a team's overall quality, however.

If Madness had football ... 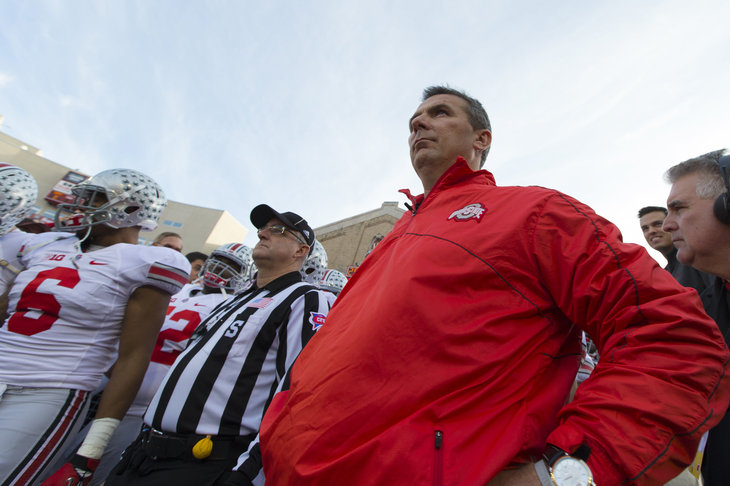 Our college football editor was asked to fill out a March Madness bracket. He misunderstood the assignment. (Photo: US Presswire)

We tried to keep a few things in mind:

1. Location. Priority goes to better teams, but is a factor for every team. We tried not to have any scenarios where the lower-seeded team is playing a "home" game against a better team in relatively even matchups.

2. Rematches: This is a somewhat minor priority for the basketball committee but we'd imagine would be a bigger priority in college football with the shorter season. With a 12-game regular season, a rematch is a do-over of 8 percent of a team's schedule. And since there are fewer power conferences in college football, it's a much bigger worry that one region could presumably have four or five teams from the same conference.

Only two teams play conference opponents in the first round, relatively few top seeds would in the second round if everything went chalk, and most hubs aren't too centered on one conference. This is damn near impossible considering how many SEC teams there are. Each region has at least one SEC team in its top two seeds, and two have two in the top three, and there's no way to avoid it. I'd estimate that there's about a 5 percent chance that if this tournament would happen, all four Final Four squads would be SEC.

3. The S-Curve: The mythical beast the NCAA Tournament hypothetically uses. That supposedly puts the best team in the same bracket as the worst No. 2 seed and some mediocre No. 3 and No. 4 seeds. I didn't obsess over this, because I feel that while it's tough to rank teams in any sport, the extremely short length of the season in college football makes ranking teams more complex. Although I gave this some thought, it wasn't much.

You're not going to miss the bracket with wins over a No. 3 seed and a No. 4 seed. The loss to Washington State is a little embarrassing, but the quality wins balance them out.

This might be the type of team that wouldn't make the basketball version of the NCAA Tournament, but would get the benefit of the doubt here because of a higher insistence on margin of victory with fewer games to factor in. The Spartans' only loss by more than four points was against a 1-seed in Notre Dame, and they managed a win against a tourney team in Boise State. They don't have the wins on the resume to start in the Round of 64, but they have the computer numbers to rank in the First Four.

Maybe the weakest FBS at-large team. Some gross losses to Virginia and Tennessee and a game against an FCS squad plus a game against a transitioning FBS team. But the win over FSU saves the Pack.

This is the only FCS team that got an at-large bid. It's pretty much based off the numbers produced by that FCS Playoffs run that saw it get to the national title game against North Dakota State. FCS national champ NDSU likewise would've been worthy of an at-large bid had it not qualified automatically by winning its conference.

The Jackets played a strong schedule and didn't do so poorly with it. The bowl against USC was a win-and-you're-in scenario, and they got the W.

Kiss those computer numbers before you go to sleep, Ball State. Also, you might want to skip your voicemail the next few days instead of listening to calls from Ohio and Bowling Green.

The win against Penn State should have gotten the Bobcats in, to be honest. But they lost to every decent MAC team they played.

This was tough, since very loss Bowling Green had was to another team in the tourney. But their best win was against Ohio.

Putting Georgia Tech in over the Blue Raiders after the Yellow Jackets lost at home to Middle Tennessee is one of the tougher decisions we had to make here. But the computer numbers really don't support MTSU's case. Its fans can be happy with making, like, the real tournament.

Wins against Fresno State and Tulsa probably should have gotten these guys in.

Six wins, with the best one coming against TCU, is not going to cut it, despite the strong Sagarin and F/+.

Most of their losses weren't so bad, except for the one against Troy. That, plus no good wins did them in.

Remember when these dudes lost to Youngstown State? That was pretty funny, right? Well, the hypothetical selection committee never forgot, not even a little bit.

Same deal with no good wins, thus bad computer numbers and losses to bubbly teams in Louisiana-Lafayette and Navy.

Let's consider the FCS Playoffs game between Montana State and Sam Houston State a play-in game, and one MSU came out on the wrong side of.