2013 Central Michigan football's 10 things to know: A wildcard of wildcards

CMU was one of the worst bowl teams in recent memory last year, but if raw experience can cure an awful defense, the Chippewas could play a power role in this year's MAC. Schedule, roster breakdown, projections and more below.

Share All sharing options for: 2013 Central Michigan football's 10 things to know: A wildcard of wildcards

Our F/+ rankings archive goes back to 2005. According to their F/+ rating, here are the 10 worst teams to participate in a bowl game in the last eight seasons:

CMU's F/+ rating was the same as the 2012 Memphis team (4-8) and slightly worse than that of teams like 2007 SMU (1-11), 2012 UTEP (3-9) and 2008 UAB (4-8). The Chippewas ranked 73rd in Off. F/+ and 109th in Def. F/+, were below average in most offensive categories, and were dreadful in most defensive categories. All of their losses were by at least 11 points, and three were by at least 18. But they somehow squeaked by Iowa with nine points in the final 45 seconds, they held off a late comeback from Eastern Michigan, they took care of business against three awful teams (SE Missouri State, Akron and UMass), and they somehow eked out bowl eligibility. If you're looking for a pretty classic "there are too many bowls" example, you had your fill last year -- CMU, Navy and Air Force were all pretty bad football teams.

That said, CMU did, in fact, win its bowl game (Air Force and Navy got romped), and the Chippewas were quite young. If the bowl win gives the program any sort of momentum to go with its experience, the quality of last year's team might not matter.

There were certainly some impact seniors on last year's squad: quarterback Ryan Radcliff, receiver Cody Wilson, four two- or three-year starters on the offensive line, end Caesar Rodriguez, safety Jahleel Addae. But a vast majority of last year's playmakers return to fill in this year's two-deep. The top three rushers return, as do four of the top five pass targets, all defensive tackles, all linebackers, and three of the top four defensive backs. Plus, some freshmen on offense and redshirt freshmen on defense could provide a bit of an athletic boost.

There are plenty of issues to be remedied as CMU moves forward, of course. The Chippewas will need to settle in on a quarterback, rebuild the offensive line, and figure out how to improve that hot mess of a defense. But even if the team wasn't as good as its record last year, this is still an interesting group, capable of showing some relatively impressive improvement in 2013. Head coach Dan Enos got himself a new contract following CMU's Little Caesars Pizza Bowl win over Western Kentucky, and while there is reason to be skeptical of that (check out the chart below: on paper, CMU really hasn't improved, even a little bit, in the last two years after the expected first-year regression under Enos), his program has a decent amount of potential.

Enos has taken the long way to rebuilding CMU -- minimal transfers or JUCO signees, in other words -- but Year 4 will tell us a lot about his program's future. 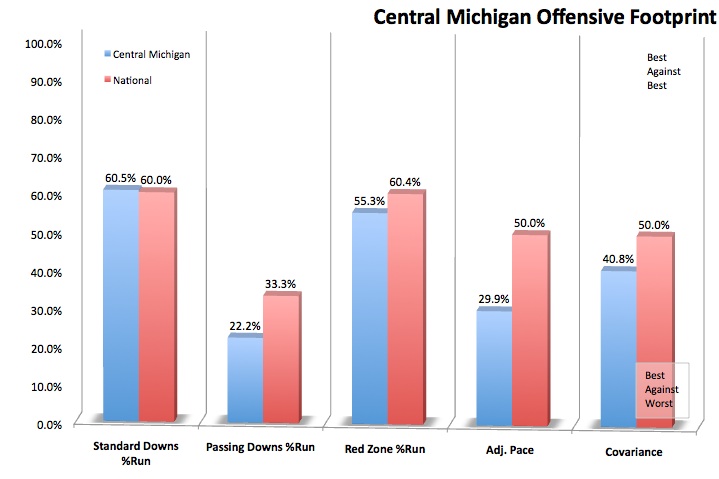 I guess when you come across a man named Zurlon, you notice him from Day 1. That makes it feel like he's been around a while. In 2012, however, Tipton made a name for himself (get it?) on the field as well; in a conference full of good running backs, Tipton was one of the best. He got reasonable help from his line, but he showed the ability to create for himself, too. Tipton has a good combination of short-yardage power and explosiveness in the open field. And he is backed up by a couple more reasonably capable backs.

The biggest story for CMU this year will probably be who wins the starting quarterback job following three-year starter Ryan Radcliff's departure. But the winner of the QB derby will have help in the backfield.

4. Titus Davis is a potential star

The winner of the QB battle will also have one hell of an explosive weapon in Titus Davis. Granted, Davis will need to improve his catch rates if he is to become CMU's new No. 1 guy (and stay out of trouble), but his ceiling is quite high. He caught 10 of 14 passes for 208 yards in a loss to Western Michigan, and even in his least efficient game of the season he showed absurd potential: Against NIU, he caught just one of eight passes ... for 92 yards and a touchdown.

Between Davis and sophomore Andrew Flory (three catches for 105 yards and two touchdowns versus Western Kentucky), CMU has some serious big-play potential. But someone will have to make the little plays, too.

5. Dan Enos loaded up on receivers

It is typically a fool's errand to look at an incoming recruiting class as a reflection of what a coach feels were his biggest needs. If you are relying on incoming freshmen to fill a hole, that hole is probably going to go unfilled. That said, it is difficult to ignore the fact that, in his 2013 signing class, Enos brought in five receivers/tight ends and five offensive linemen. These two units make up 48 percent of the incoming class and perhaps an even higher percentage of the higher-ceiling guys. According to Rivals.com, all five three-star signees, and five of the seven players receiving the highest two-star designation (5.4) are either receivers or offensive linemen.

One has to figure a few of these guys will see the field in 2013, especially in the receiving corps. (It often takes linemen a little while longer to assimilate.)

6. It seems every offensive line in the MAC is rebuilding

And now you've got CMU, looking at replacing four guys who combined for 124 career starts. The offensive line is experience-friendly. In most years, you're probably going to have to replace some reasonably experienced guys. Plus, only three of the four lost linemen were starters for most of 2012 (Jake Olson was lost for the year early on). But CMU's returning total of 35 career starts is still quite low, and it will be interesting to see if any of the higher-upside freshmen find early work in the rotation. Size isn't an issue for CMU -- the six returnees from last year's two-deep average 6'4, 304-- but experience is. 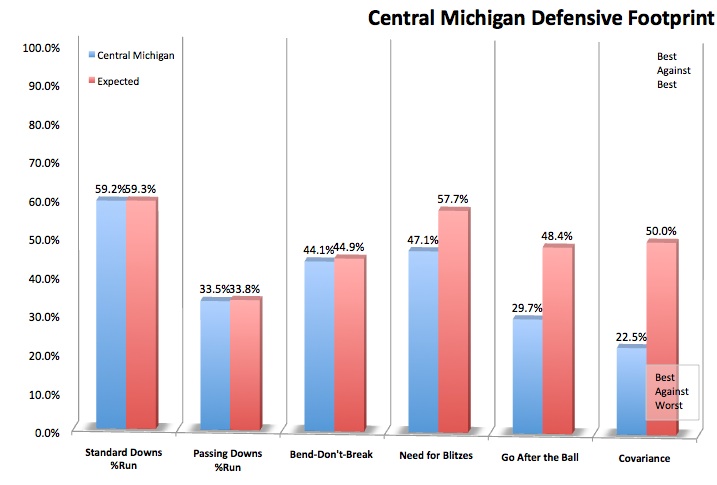 While the offensive line and quarterback positions won't have much experience, most of the defense will. Is that a good thing? Some new blood might not be a bad idea for a defense that ranked 102nd or worse in almost every major advanced category above. This unit really didn't have any particular strength in 2012, other than perhaps the play at safety; but one of the two starting safeties is gone, and there is no immediate answer for Jahleel Addae's lost play-making ability.

Experience will help with some of last year's woes, but you need talent first. Does the defense have any?

8. Attacking from all directions (by necessity)

Either by design or necessity, CMU came at you from everywhere last year. Safeties Avery Cunningham and Jahleel Addae combined for almost three times more tackles for loss than all CMU linebackers combined and almost as many sacks as CMU's starting defensive ends. That's impressive for the safeties ... and less-than-impressive (to put it kindly) for members of the front 6-7. Cunningham returns, as do ball hawks Jason Wilson and Jarret Chapman (combined: two interceptions, 13 passes broken up). However, this secondary was still far from strong (CMU was 120th in big plays allowed through the air, i.e. Passing PPP+), and the front of the defense is not guaranteed to improve.

In Saylor Lavallii and Defarrel Davis, CMU has a rather impressive pair of kick return men.Plus, punter Richie Hogan isn't bad, and CMU almost can't help but improve in the realm of punt returns this year. But kicker David Harman was perhaps the strongest player in last year's special teams unit, and he is gone.

We can conclude quite a bit about teams in the 2013 MAC. We know UMass and Akron will probably still struggle (and we know the odds are decent that Eastern Michigan will, too). We know that Northern Illinois, Toledo and Ohio are probably going to be strong, and we know that Kent State and Ball State (and, because of experience, perhaps Buffalo) should be, too.

But we really don't know much at all about Central Michigan. According to F/+, the Chippewas were the No. 9 team in the conference last year. They had plenty of flaws, more than most, but in 2013 they'll have as much experience and depth as anybody in the conference. I find myself growing pretty optimistic about CMU -- this team has more pure upside than most MAC teams -- but then I look at those defensive stats again and grow gun shy. Can you blame me?