Western Michigan took a chance by hiring 32-year old former MAC star P.J. Fleck as its head coach. Can he and his new staff make something of spread personnel on offense and iffy personnel on defense?

Share All sharing options for: 2013 Western Michigan football's 10 things to know: Youth movement on the sideline

I am just young enough to still have my mind blown when somebody younger than me is hired to become the head football coach at an FBS school. I'm sure this feeling will die down more with each passing year.

Coaching changes are complete and total crap shoots. That Fleck has not yet even been a coordinator is a bit of a concern, but one cannot fault Western Michigan for aiming high and looking for the Next Big Coaching Star to navigate its program through parity-filled slog of the MAC. In this conference, you are basically 2-3 years from contending no matter who you are (unless you're Eastern Michigan, anyway), so I guess the thinking is that you swing for the fences, and if you miss, the next guy can clean up the mess.

2. It's a Rutgers reunion

Fleck has certainly compiled an interesting set of influences in his short time as a football coach. He has coached under Jim Tressel, Jerry Kill, and Greg Schiano (in both college and the pros), so while you're thinking of him as WMU's attempt to land the Next Matt Campbell (the Toledo coach with the high-octane offense), his resume would suggest otherwise. And his choice of coordinators would really suggest otherwise.

Fleck hired Kirk Ciarrocca to run the offense and Ed Pinkham to run the defense. Each was a co-coordinator at Rutgers in 2009-10, and Fleck started there in 2010. Both are sufficiently experienced -- Ciarrocca is 47, Pinkham 59. Pinkham's Rutgers defenses were aggressive and mostly successful, though Ciarrocca's Rutgers offenses left something to be desired. He and co-coordinator Kyle Flood (now Rutgers' head coach) attempted to bring more of a wide-open look to Rutgers' pro-style offense, and it never took hold. It will be interesting to see what he does with personnel originally recruited to run former head coach Bill Cubit's rather effective spread offense.

WMU definitely regressed in Bill Cubit's final season in charge. In 2011, the Broncos ranked 60th in the overall F/+ rankings -- 34th on offense, 91st on defense, eighth on special teams; but the offense sank to 66th in 2012, and with freshmen playing all of the major kicking roles, special teams plummeted to 107th. The defense improved slightly, but there was no mistaking that WMU put a worse product on the field last fall, which was disappointing considering expectations.

That said, luck also played a significant role. WMU recovered only 42 percent of all fumbles and intercepted just eight passes among 53 passes defensed. The Broncos suffered significantly in terms of turnovers luck, and it cost them a few points per game. In a season that saw them go just 1-4 in games decided by one possession, the impact of luck was significant. If WMU goes just 6-6 or 7-5 despite the overall regression, does Cubit get canned? Probably not. 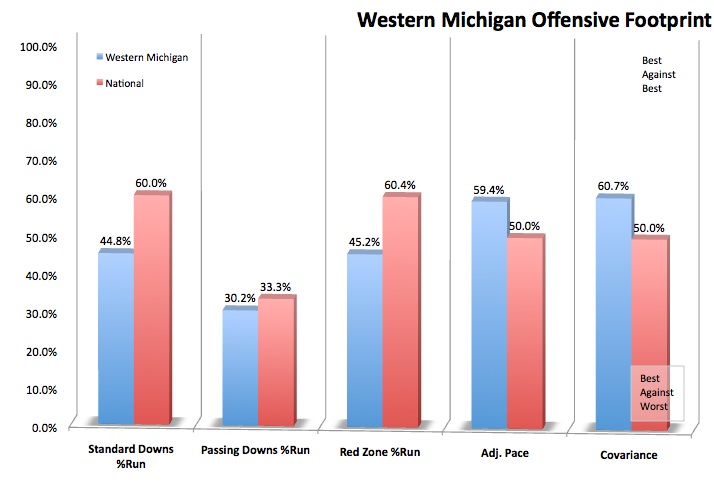 The first two things I noticed about quarterback Tyler Van Tubbergen: 1) He completed 19 of 21 passes for 252 yards and six touchdowns in his first career start against Akron in 2011. 2) His name is Van Tubbergen. I've liked him ever since. When starter Alex Carder went down with injury, we got to see a lot more of Van Tubbergen in 2012, and while he couldn't match the pace he set the previous fall, he at least wasn't awful, especially considering the extreme youth of the receiving corps. Still, WMU's Passing S&P+ ranking fell from 36th in 2011 to 77th, and the run game couldn't make up the difference. WMU's offense wasn't the problem in 2012, but it still wasn't great. One has to assume Van Tubbergen is the leader in Fleck's first QB race, but he could be vulnerable to a challenge as time goes on.

Van Tubbergen's biggest problem in 2012 was simply that he couldn't handle more athletic defenses that well. He completed 46 of 61 passes (75 percent) for 645 yards, nine touchdowns and two interceptions versus UMass and Central Michigan last year, but he was just 72-for-134 (54 percent) for 770 yards, three touchdowns and eight picks versus Toledo, Ball State and Kent State. Experience, both his own and that of the receiving corps, might help in this regard.

WMU certainly doesn't have the most high-ceiling set of skill position players in the MAC, but few can match the Broncos' mix of quantity and quality. Former star recruit Jaime Wilson held his own as a redshirt freshman in the No. 1 target role, Josh Schaffer is a decent big-play guy, and both Dareyon Chance and Brian Fields are decent, if not particularly explosive, backfield options. WMU returns four running backs who got at least 22 carries last year and seven players targeted at least 13 times.

Thus far, we've covered four decent MAC teams forced to rebuild a good portion of their offensive lines -- Ball State, Kent State, Miami, Central Michigan; we can add WMU to that club. Gone are two all-conference guys and four overall starters (94 career starts) from a line that was an offensive strength a year ago. Fleck has done some shuffling, it appears (Terry Davisson has moved to center, a redshirt freshman is first-team right tackle, and both left-siders are sophomores), and we'll see how it goes. 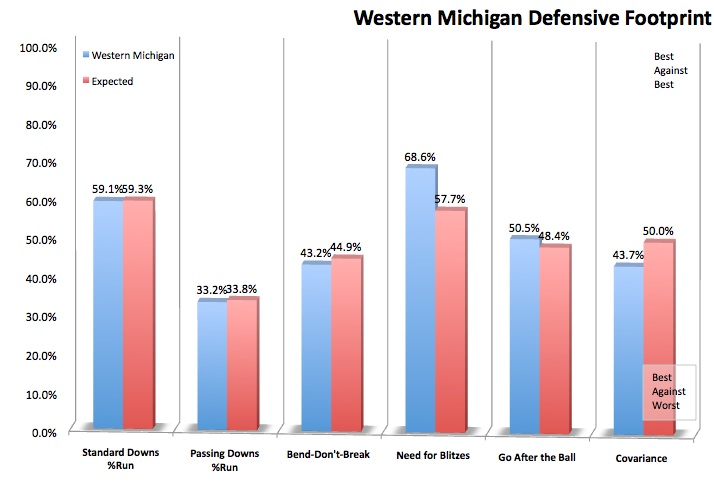 Add up the former three-star recruits on this page. You'll find seven on offense and five on defense. Last year's offense also featured four-star Michigan transfer Dann O'Neill at right tackle. That isn't an enormous difference, but it might go part of the way toward explaining why WMU's defense lagged behind the offense over the last couple years of the Cubit era. (That, and Cubit is an offensive coach by nature.) The Broncos almost had the worst defense in the country in the first quarter (which could also suggest general game-planning issues) and struggled against the pass in every quarter. That's a problem in the home of MACtion.

New coordinator Ed Pinkham inherits a defense that is quite experienced in the back seven but has holes to fill up front on a line that was a relative WMU strength. Tackle Travonte Boles and linebackers Desmond Bozeman and Terry Easmon are keepers, but the talent might not quite be where it needs to be for Pinkham to succeed.

8. A youth movement up front?

WMU must replace each of its starters at end, along with its backup nose tackle. The departure of talent, combined with Pinkham's move from a 3-4 to a 4-3 defense, could result in some serious youth on the line in 2013. And that might not necessarily be a bad thing. Players like Michael Dubose (the star of last year's recruiting class) and Khairi Bailey (the star of this year's class) might be able to get up to speed quickly, and if Travonte Boles stays healthy, there is disruptive potential at tackle. Still, whatever this line may become, one has to assume a step backwards this fall.

9. Experience is good (in theory)

I've given this example before, but back when Columbia was in the middle of a devastating losing streak in the 1980s, I scoured a preseason magazine (Sporting News, I think) in search of hope for the hapless Lions. I pointed out to my father that CU returned a ton of starters. That had to mean they were going to improve pretty dramatically, right? My father responded that experience isn't always a good thing if the experienced guys are the same ones who were terrible in past years.

I recall that exchange pretty frequently, and I certainly did so when looking at the returning personnel in the WMU secondary. Despite a Top 50 pass rush, the Broncos' pass defense ranked just 109th in Passing S&P+. That's bad. The fact that 13 of 14 defensive backs return this season isn't automatically a good thing.

Corner Donald Celiscar is a perfect reflection of the secondary as a whole, with the good-but-bad nature of his stat line. Good: He defensed 16 passes last year, one of the higher totals in the country. Bad: he also made more tackles than any WMU linebackers, which suggests that his man was catching a lot of passes.

WMU plays four opponents projected in the F/+ Top 50, and three come in the season's first four weeks, when the team will likely still be figuring things out with the new staff and a restructured defense. Meanwhile, the Broncos play three teams projected 101st or worse, but two are on the road. There is reasonable raw talent here, and there is a chance that Fleck and company craft something pretty unique and interesting with this personnel; more likely, however, is a situation in which it takes WMU a year to begin to rebound.

Western Michigan had a reasonable run of success under Bill Cubit -- five seasons at .500 or better in seven years (2005-11), three bowl appearances -- but the Broncos couldn't ever get over the hump and make a serious run at a MAC title. They haven't been to a MAC title game since 2000, and they probably won't make it in 2013. Hiring P.J. Fleck was a risk, and even if Fleck turns into a star, the odds are good that it won't happen immediately, not with a rebuild in the trenches (on both sides of the ball), and not with that defense.

• Pay-for-play sports can be compatible with college