Toledo, Ohio and Bowling Green could all make a run at the MAC championship this year. But until Jordan Lynch and Northern Illinois give us reason to think otherwise, we should probably consider the Huskies the favorite for one more year.

1. It was a seven-point game heading into the fourth quarter

As the past few months of the football offseason have elapsed, I've noticed that Northern Illinois' performance in the 2013 Orange Bowl has been lumped pretty closely to Hawaii's performance in the 2008 Sugar Bowl. Granted, NIU did not put up a Boise State- or TCU-esque performance in its BCS bowl opportunity, but I did want to take the time to remind everybody that, heading into the fourth quarter, the score was Florida State 17, Northern Illinois 10. Yes, FSU scored twice early in the fourth to make it a 21-point cushion. Yes, FSU physically dominated. But of course FSU physically dominated. The Seminoles were one of the most physically impressive teams in the country, and NIU was small even by MAC standards.

Under Dave Doeren (and before him, Jerry Kill), NIU consciously sacrificed size for speed in instances when it couldn't have both. In a way, they have become a winning program again because of this, not despite it. The Huskies have won 34 games in three years by pummeling away with an efficient run game, making big strikes in the passing game, and bending, bending, bending, and rarely breaking on defense. That was exactly what they tried to do against Florida State, and it worked for a while. The offense went nowhere -- despite quarterback Jordan Lynch, it was actually the lesser of NIU's units -- but the defense did what the NIU had done all year. The Huskies forced a fumble at the NIU 29, held FSU to a (missed) field goal attempt in the second quarter, scored following a long strike to Akeem Daniels early in the third quarter, and was actually driving to tie the game late in the third quarter before Lynch forced a pass that was intercepted. There was no margin for error in this strategy, but it worked for quite a while.

Yes, NIU was a lot closer to Hawaii than Boise/Utah/TCU. But they were more competitive, and they deserve credit for that.

2. Time to roll the dice again

Life as a mid-major is, as has been said many times, a bit frustrating. If you make a bad hire, your program falls apart. If you make a good hire, you lose your coach within a couple of years, and you have to hire a new one. Some reward. NIU was able to withstand the loss of Jerry Kill to Minnesota by making an inspired hire of then-Wisconsin defensive coordinator Dave Doeren. But after just two years (and 23 wins), he's now at N.C. State. To keep the good vibes rolling, NIU looked inward; they promoted Doeren's offensive coordinator, Rod Carey (who served as interim coach in the Orange Bowl), to the top spot.

For mid-majors, it's almost as if a program's own infrastructure matters as much as the coach it hires. If this is indeed the case, then Carey has a good chance of succeeding. Over the course of 12 seasons in DeKalb, former head coach Joe Novak helped to lay the groundwork for a quality program. Granted, he couldn't maintain success forever (NIU went 2-10 in his last season, 2007), but NIU averaged 8.2 wins per year from 2002-06, a lovely total in the parity-addled MAC, and despite 2007, it didn't take Jerry Kill long to re-establish momentum. Now, NIU has been to five bowls in five years; the program is built for success, and Carey inherits quite a seasoned roster for the 2013 season. He even retained defensive coordinator Jay Niemann; NIU's defense is strong but unique, and avoiding turnover at the coordinator position was huge.

3. It takes a little while sometimes

Following the departures of starting quarterback Chandler Harnish, running back Jasmin Hopkins, and all five starting offensive linemen, one had to assume NIU's offense would take a step backwards in 2012, and it did ... at first. Despite scoring 30 points or more in three of four games (versus awful defense), the Huskies really weren't very good in September. But once NIU hit conference play, Jordan Lynch found an almost inconceivably impressive rhythm.

Yes, the train slowed down in the Orange Bowl. Florida State was just a little too physically impressive, the run game vanished, and Lynch made some mistakes. But in nine MAC contests, Lynch and the offense were nearly untouchable. The defense, meanwhile, started out average and ended up good. Even against Florida State, the D was reasonably able to avoid the big, dagger plays (aside from two 30+ yard Lonnie Pryor runs, anyway). 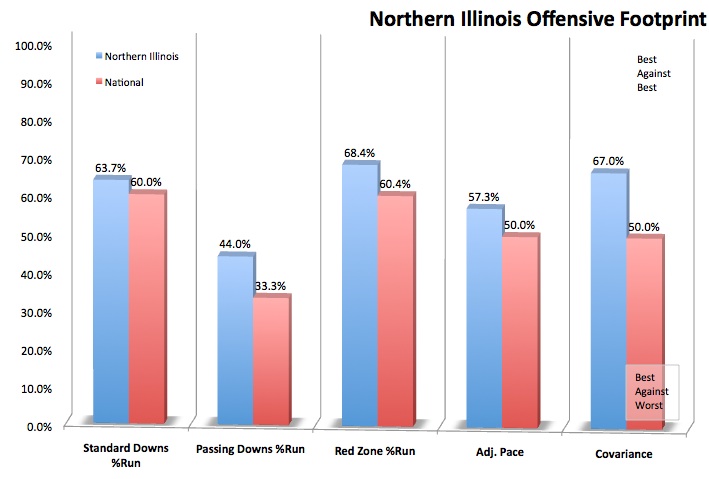 Lynch's completion rate sagged at times (44 percent versus Central Michigan, 56 percent versus Kent State, 37 percent versus Florida State), and it took a toll on NIU's overall passing efficiency; but his ability to soften defenses up with zone read keepers between the tackles, find quick receiving options like Tommylee Harris and Akeem Daniels out of the backfield, and occasionally strike deep, was too much for MAC defenses once he found his sea legs, and in the end he produced a disturbingly Harnish-esque stat line, slightly worse through the air and better on the ground:

Akeem Daniels was NIU's leading returning running back heading into 2012, but he didn't really get untracked until late in the season. He carried just 28 times for 161 yards in the first 10 games of the year, and he gained just 31 yards in eight carries against Toledo in Game 11. But he ripped off 112 yards and four touchdowns in just 12 carries against Eastern Michigan, and with Kent State focused on stopping Lynch in the MAC title game (with iffy success), Daniels hit the corner repeatedly and gained 128 yards in 17 carries (with four catches for 67 yards).

With Daniels clicking like he did against Kent State, NIU basically forms a picket fence with an opposing defense. It can stretch you to the max horizontally with Daniels, it can stretch you vertically with its wideouts (thought finding a replacement for the prolific Martel Moore and his 14.4 yards per catch is far from certain), and it can stretch you up the middle, between the tackles, with Lynch. NIU stretches you to the max, finds your breaking point, and destroys you with it. And with Rod Carey's promotion, we can assume that little will change in 2013. Against a defense as athletic as Florida State's, this might not work quite as beautifully (to state the obvious), but ... try to find a defense as athletic as Florida State's on the 2013 schedule. You can't.

I spoke with handicapper "Dr. Bob" Stoll last December; we were comparing notes and stat tidbits, and he mentioned that one of the most overrated, overused factors in college football was our reliance on experience to project offensive line quality. I struggled with that a bit, simply because I can pull together decent correlations between experience and improvement/regression in the line stats listed above, but a) the correlations aren't quite as strong as I might have originally thought they'd be, and b) let's just say that NIU's 2012 offensive line is pretty good evidence in support of Stoll's theory.

NIU entered 2012 with just 24 returning career starts -- 22 from guard Logan Pegram and two from guard Jared Volk. But then Pegram was lost for the season (and the rest of his career) with injury, leaving NIU with just two career starts. And the Huskies were Top 50 in Adj. Line Yards and Top 40 in Adj. Sack Rate. Despite a few more injuries during the season, the line protected Lynch, created opportunities for NIU running backs and did its job beautifully in short-yardage situations. And now it returns almost everybody from last year's two-deep.

Stoll's theory is that a team's offensive line coach matters almost as much as its experience level. Who was NIU's line coach in 2012? Rod Carey. We'll see if his move to the big chair affects this unit in some way, but with decent continuity on the offensive staff (new line coach Joe Tripodi was last year's TE/FB coach) and infinitely greater experience, there's no reason to expect a drop-off in production from what might be the conference's best line. 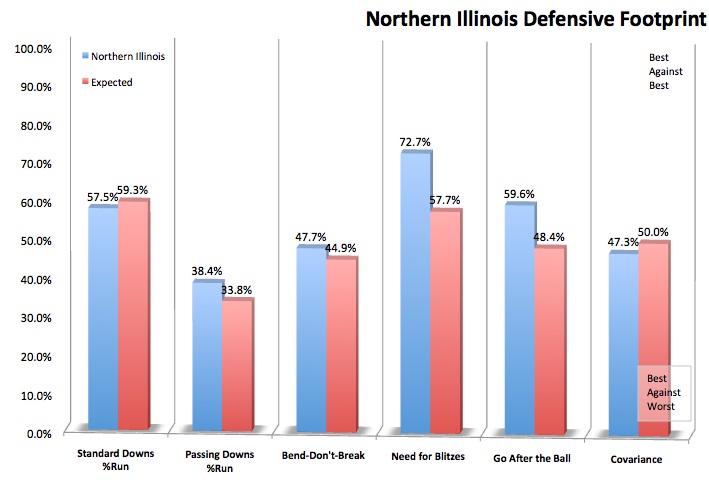 Against Florida State, NIU's starting DL averaged 6'1, 264. The starting linebackers averaged 5'10, 224. Again, the Huskies never had a chance to compete from a size standpoint with the Seminoles, but NIU got to the Orange Bowl, in part, because of this line's aggressiveness and competency. NIU was top 40 in Adj. Line Yards despite the size issues, with seven different linemen compiling at least 6.5 tackles for loss, with a lovely opportunity rate (the ability to prevent chances for opposing running backs) and an even lovelier sack rate.

Three starters have departed, but NIU's depth should come in handy. Ends Joe Windsor and George Rainey combined for 17 tackles for loss last year, comparable to the 22 last year's starters managed. NIU utilized its depth to great success last year, and it should help the Huskies get through some attrition mostly unscathed.

Again, depth -- both of the intended and unintended (injuries) variety -- could pay off for NIU in 2013. The Huskies must replace a stellar safety in Demetrius Stone and a wonderful corner in Rashaan Melvin, but returning corners Marlon Moore and Sean Evans combined for 14 passes defensed, and NIU still returns seven defenders who logged at least 15.5 tackles in 2013.

...but NIU is still the king of the MAC. And until someone takes down the Huskies, it is probably rather silly of me to be saying "This is the year" for Toledo or anybody else. The Huskies must replace some play-makers on defense, and they will now be working with a third head coach in four years. These are red flags if nothing else. But the coaching staff has strong continuity considering Dave Doeren's departure, the defense's 2012 depth should come in handy, and, well, Jordan Lynch returns.

NIU must make road trips to Kent State, Central Michigan and Toledo in conference play, and trips to Iowa and Purdue loom in non-conference. So another Top 15 finish and BCS bid might be too much to ask for. But NIU is the MAC favorite until it proves it no longer deserves to be.

This is the final MAC team profile, so I thought it would be interesting to lay out what I consider to be the MAC balance of power as we plod through spring ball.