Can the Minutemen improve on just about the worst debut possible? Schedule, roster, projections and more below.

The University of Massachusetts announced on April 20, 2011, that its football team would move up to FBS. At that point, the Minutemen were just three seasons removed from a CAA conference title and four seasons removed from a trip to the FCS national title game. If it had joined the MAC in 2006, the breaking-in period may have gone reasonably well. UMass ranked 59th in the 2006 Sagarin rankings, ahead of every MAC school but Central Michigan. In 2007, they ranked 77th, ahead of everybody (unless I missed someone).

By 2011, however, the program had lost a little bit of steam. Head coach Don Brown left Amherst to become Ralph Friedgen's defensive coordinator at Maryland, and Kevin Morris went just 5-6 in 2009 and 6-5 in 2010. The Minutemen went 5-6 again in 2011, and Morris was replaced by former Notre Dame offensive coordinator Charley Molnar. Insert a ton of injuries, put onto the field one of the most ridiculously young teams ever, and you have just about the worst FBS debut season imaginable.

Timing really hasn't been UMass' thing -- one could argue that the program should have made the FBS move 50 years ago -- but wow, was the timing bad in 2012. What seemed at one time to be a logical, well-timed decision quickly turned into a nightmare. It was so bad that, to some faculty, UMass' stay at the FBS level should have been cut very, very short.

2. It's not a good sign when the response to your first FBS season is a vote to leave FBS.

The motion was beaten by a 19-18 vote with one abstention. Absent from the vote was professor Max Page. He had been the most vocal critic of the school's move to the FBS but was out of the country on Thursday and could not vote.

"Whatever else might be said of the 2011 decision to move to the next level, it was never presented as a one-year experiment," said chancellor Kumble Subbaswamy at Thursday's meeting. "It simply couldn't be. Like many decisions I inherited, it is my job to ensure the program's success in a responsible manner. That's what I intend to do. I have been consistent in this position. As with any major campus initiative we will carefully monitor the progress and the financial commitments associated with the process to ensure that the best interests of the university as a whole are always at the forefront."

Or, to put it another way, UMass football edges faculty for second FBS victory.

(Matt Sussman is awesome, by the way.)

Even with no injuries, this team wasn't going to be very good in its first FBS season. The team was too young, there was not enough FBS-level talent (even with the addition of some late senior transfers), and the new coaching staff was attempting to get its footing. But then quarterback Kellen Pagel was lost for the season to concussion-related issues (he is now on the UMass baseball roster, not the football roster), leaving two freshmen in his place. And the offensive line dealt with injuries and extreme youth. And the secondary dealt with xtreme-with-an-x youth. And after losing the top five 2011 targets from the receiving corps, almost nobody stepped up when given opportunities to make a mark. (The quarterback issues didn't help.) And a team that probably wasn't good enough to rank better than about 105th or 110th in the F/+ rankings instead became one of the two or three worst teams in the country.

If you're looking for a ceiling, however, look toward one specific game.

Against an undefeated Ohio squad that had beaten Penn State about a month earlier, in front of a paltry 8,321 fans at Gillette Stadium, UMass almost pulled off a miracle.

The Minutemen gained 511 yards on a faltering Ohio defense, threw for 373 yards, moved the chains 28 times, took a 27-20 lead into the fourth quarter, faltered, rallied, and got to the Ohio 45-yard line with about 30 seconds left. But four straight incompletions ended an upset bid, and Ohio held on, 37-34. Quarterback Mike Wegzyn completed 27 of 51 passes for 373 yards and four scores, but it wasn't enough. We briefly got a glimpse of the potential of UMass' pistol attack, but that was just about the last time we would see potential in 2012. 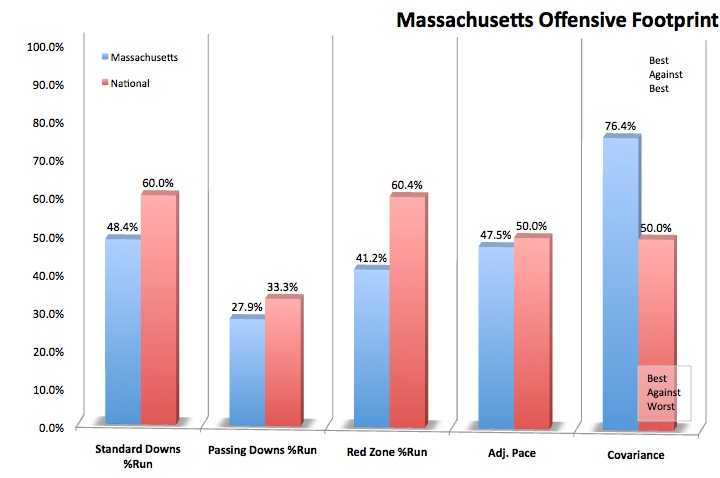 5. Continuity would be a start.

Two freshmen got time at quarterback, four freshmen got opportunities at receiver, and four freshmen started at least one game on the line. The lineup we saw was not what we were supposed to see, but injuries were devastating to the UMass charge in 2012.

Some improved injury luck might allow the Minutemen to take advantage of what could be a lovely base of experience. This will be the case in 2014 more than 2013, probably, but this fall we'll still see a couple of interesting quarterbacks getting longer looks (both Mike Wegzyn and A.J. Doyle showcased at least a little bit of running ability and never had a chance to prove themselves as passers with this line and this receiving corps). We'll also see a potentially interesting corps of running backs, one that should include star freshman Lorenzo Woodley. The Minutemen almost certainly aren't going to win many games in 2013, but continuity and further experience could pay off dramatically in coming seasons.

This time last year, UMass boasted three two-year starters on the line, which looked like a potential strength for an offense in need of one. The unit was still pretty awful, however (especially in run blocking), in part because of injuries. Nine players started at least one game, including four freshmen/redshirt freshmen. The pass protection was not horrible, but UMass was the worst in the country at opening holes on standard downs.

And now the Minutemen must replace their three most experienced starters.

Big Anthony Dima returns to anchor what will still be one of the younger lines in college football. UMass returns 31 career starts, 11 of which came from players who are now sophomores. This isn't a recipe for improvement, but with a load of sophomores and a new offensive line coach (former Cincinnati assistant Dave Johnson), things certainly look pretty good for 2014 and beyond. That's something. 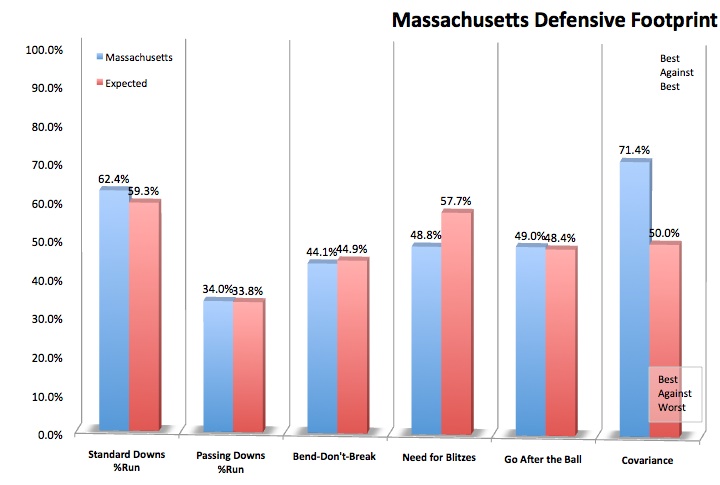 7. The secondary was crazy-young last year.

Few FBS units had to be shuffled around more than UMass' secondary. Thanks to injuries and attrition, 10 different Minutemen got the chance to record at least 10.0 tackles, only three of the 10 played in all 12 games, and by the end of the season, almost the entire two-deep (six of eight spots) consisted of freshmen and redshirt freshmen. Yikes.

Last year's shuffling, however, could turn into this year's strength. In sophomore corners Randall Jette, Troy Dudley-Giles and D'Metrius Williams, UMass has a trio that combined for two picks, 14 passes broken up, and 2.5 tackles for loss. Throw in four experienced safeties, and you've got a recipe for improvement, especially considering the front seven returns four players who made at least 4.0 tackles for loss last fall. There is almost literally nowhere to go but up for this defense, but overall the UMass D might be the first of the two major units to actually resemble an FBS unit.

8. Special teams was, and should again be, a relative strength.

UMass' special teams unit was far from perfect -- iffy returns, few touchbacks on kickoffs, iffy punting -- but UMass made 10 of 12 field goals under 40 yards and covered kickoffs well. And in the absence of other strengths, this is something on which you can hang your hat.

9. Whatever UMass might become, it's still a year away from starting to become it.

The schedule features just four teams projected 100th or worse in the F/+ projections, and only two projected worse than Miami (Ohio) at No. 106. Considering 100th-105th is just about the best UMass can hope for with its continued youth, that suggests that the Minutemen are not going to win many games this fall.

That said, last year's ridiculously young team is still going to be young in 2013; if it sticks together, UMass will have one of the most experienced teams in the MAC come 2014-15. In players like Mike Wegzyn, Lorenzo Woodley, a host of young receivers and offensive linemen, and a defense that will feature perhaps as few as 6-7 seniors on its two-deep, there is a core around which Charley Molnar can build.

We don't know about the overall level of talent yet, and returns aren't amazingly promising, but in a year or two we might find that things are improving swiftly in Amherst.

(I really wanted to end this on a positive note.)