2013 Eastern Michigan's 10 things to know: Searching for another window of opportunity

EMU football has yet to amount to much. Can the 2013 Eagles build momentum for 2014? Schedule, roster, projections and more below.

Share All sharing options for: 2013 Eastern Michigan's 10 things to know: Searching for another window of opportunity

To put it kindly, Eastern Michigan doesn't have much of a football history. The Eagles (then called the Hurons) experienced just one winning season in their first 11 years as a Division I program. They went 10-2 under Jim Harkema and won the California Bowl in 1987, won another 13 games in 1988-89 ... and have not won more than six games in a season since. Rick Rasnick went 6-5 in 1995. Ron English went 6-6 in 2011 (EMU was ineligible for a bowl that year because they won two games versus FCS teams). And that's your EMU football history.

The 2011 season was regretful. With a rather experienced team (English's third in Ypsilanti), it looked like EMU might have a path toward bowl eligibility and its first postseason appearance in 24 years. And that's how it's supposed to work, right? You scuffle along for a couple of years, get some of your kids in place, get some breaks from the schedule, and experience a lovely breakthrough. That leads to better recruiting, more success, et cetera. It looks great on paper, and sometimes actually works out the way it's intended to; but sometimes it doesn't work out.

EMU headed into November 2011 needing two wins in four games to reach bowl eligibility. The Eagles lost to Ball State, 33-31, on the heels of a last-second, 44-yard field goal. They handled Buffalo but fell to Kent State, 28-22, on a 70-yard, fourth-quarter touchdown pass. And late in a game with eventual MAC champion Northern Illinois, EMU got the ball with a chance to pull an upset. But a desperation drive stalled at midfield, and EMU lost, 18-12. Three great chances, three losses, one game short.

In 2012, the cycle began again. Ron English had to replace a ton of experience, due to graduation, injury and general attrition, and his fourth EMU squad regressed. Combined with a pretty tough schedule, EMU just never had a chance. That he got a fifth year in Ypsilanti is good -- too often, programs compound their struggles with an itchy trigger finger -- but one has to imagine he won't get too much more if his 2013 squad doesn't start to turn around the misfires of the previous fall.

2. The experience level is better this year

EMU doesn't have much of a senior class this season -- there is basically one senior starter on the offensive line, one on the defensive line, one or two at linebacker and one or two in the defensive backfield -- but last year's deluge of freshmen and sophomores is now a flood of sophomores and juniors. There are still serious question marks regarding experience at offensive line (three starters who had combined for 100 career starts are gone) and in the linebacking corps (four of the top five are gone), but EMU should expect to be both more experienced and better in 2013.

Probably not better enough, but you never know. The offensive backfield is legitimately interesting, and it could get even more interesting with the arrival of EMU's most highly touted recruit ever this fall.

With a team stripped bare of experience, EMU's best hope for the first six games of 2012 (now that we know how much better Ball State and Kent State would become) was 1-5. EMU got thumped by a pretty good (for FCS) Illinois State team, and that basically clinched an 0-6 start. The Eagles were lucky to stay close to a field goal-happy Michigan State, and they almost won a shootout versus Toledo; plus they pulled it together, beat Army and Western Michigan, and almost took out Central Michigan (which would have denied the Chippewas bowl eligibility). But this was a "building for 2013" year from the start. 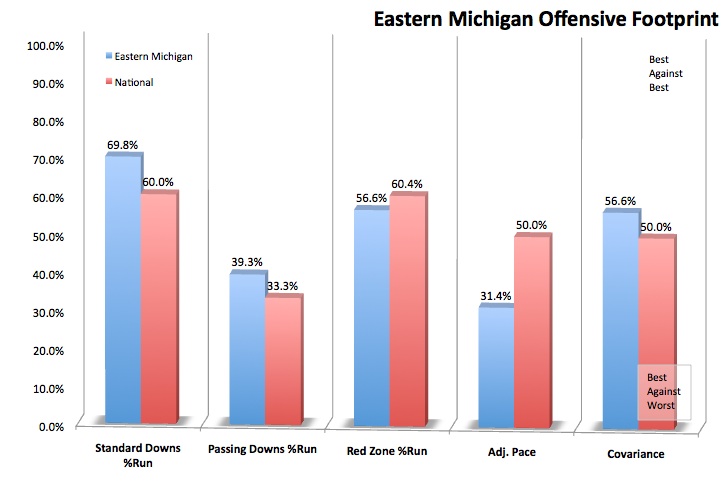 A four-star recruit from Toledo St. John's high school fielded interest from Cincinnati and a lot of midwestern schools and had received offers from most of the MAC by the middle of last summer. But on July 8, he committed to Ron English and EMU, and he never looked back. In the end, Rivals.com rated him the No. 17 pro-style quarterback in the country and a Top 20 prospect in the rich state of Ohio, but he remained committed to EMU, becoming the Eagles' most highly-touted signee ever in early February.

As such, one would worry about Brogan Roback getting thrown into the deep end too early. But with the return of Tyler Benz behind center, EMU won't be forced to immediately find out what they have in Roback if he's not blatantly ready to go. Benz was an interesting option when he replaced starter Alex Gillett (who moved to receiver) early in the season. He showed some big-play capability in the passing game (13.3 yards per completion is pretty high; each of EMU's top three targets averaged at least 13.4 per catch) and was a reasonably competent runner (4.9 yards per non-sack carry), but EMU was lacking terribly in efficiency. It was big-play-or-bust in 2012, and ... it was mostly bust. Still, there are worse options than Benz behind center.

EMU must replace its top receiver, but in junior receiver Donald Scott, sophomore Dustin Creel and tight end Tyreese Russell, the passing game still features some big-play threats (albeit ones who probably need to up their mostly awful catch rates a bit).

But the big-play threat in this offense is Hill, an October supernova last fall. Hill carried just seven times in five games but took over as primary ballcarrier against Toledo. In his first five games in that role, Hill carried 105 times for 724 yards. Keep that up for a full season, and you gain more than 1,700 yards. He gained just 106 yards in 28 carries in EMU's last two games, but he left his mark in October and early November.

Of the 114 FBS players with at least 140 carries in 2012, only 12 managed to average 7.0 highlight yards per carry, and only seven of those 12 were running backs: Arizona's Ka'Deem Carey, Oklahoma's Damien Williams, Kent State's Dri Archer, UCF's Latavius Murray, Utah State's Kerwynn Williams, Houston's Charles Sims and Hill. Highlight yards are, on paper, the yards you gain after the line has done its job; if the line could get Hill through the first level of the defense, Hill was capable of going a long, long way.

Of course, Hill will be taking blocks from a line that has to replace three two-year (or more) starters. Highlight yards don't really come into play unless you get the chance to create a highlight. There is some experience up front -- four returnees have started at least eight games -- but quite a bit less than last fall. New offensive coordinator (and former Ball State offensive coordinator and head coach) Stan Parrish has some toys in the skill position toybox, but a line that was a relative strength last year (37th in the country in Opportunity Rate, i.e. creating opportunities for its runners) might be a hindrance this time around. 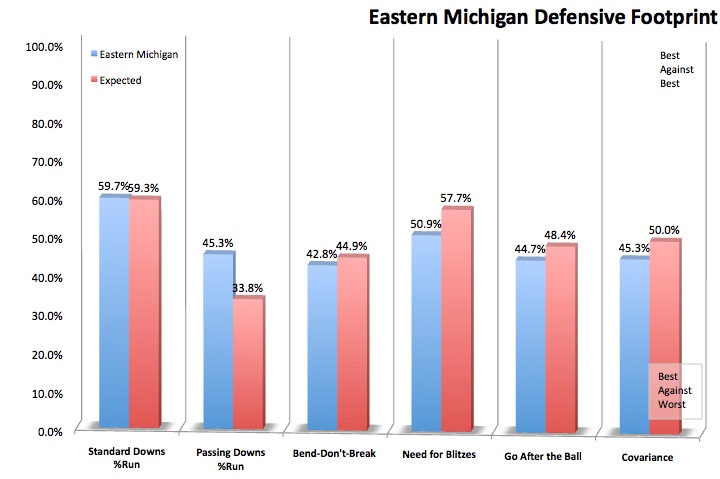 End Kalonji Kashama logged two sacks in the first three games of the year, one against Ball State and one against Purdue. He reeled in a third sack against Toledo. Those three sacks represented 43 percent of EMU's season total. There was simply no push up front. EMU's rush ends combined for one sack, the same number as EMU's safeties. And while linebackers Justin Cudworth and Bryan Pali did combine for 13 tackles for loss in 2012, a) none were sacks, and b) Cudworth and Pali are both gone.

Now, EMU did pull off a decent 23 sacks in 2011; they aren't that far removed from competency in this regard. But with little new blood in the rotation here, it is difficult to see the Eagles suddenly generating a decent pass rush again. That, combined with a new set of starting linebackers, will put a lot of pressure on EMU secondary ... again.

7. The secondary gets a boost

EMU's secondary needed some help, both because of its own iffy performance in 2012 and the complete lack of assistance it got from its pass rush. With two junior college transfers and a three-star freshman joining a senior safety (Donald Coleman) and a former star recruit (Pudge Cotton), it's easy to see this unit improving a bit. Whether that matters will depend on the front seven. Well, that, and the defensive coordinator, whoever that may be. Phil Snow is gone, but no replacement has been listed on EMU's website.

8. A mixed bag on special teams

Punter Jay Karutz was a lovely weapon for a team that, well, punted a lot, but with his departure, the special teams unit is relatively mediocre. Kicker Dylan Mulder was accurate on field goals (strangely, he was more accurate on those than on extra point attempts), and Tyler Allen showed a little bit of potential as a kick returner. But nobody on the team could get the ball into the end zone on kickoffs, and EMU gained almost as much yards on fair catches as it did when it actually tried to return punts.

It does appear that Ron English has improved his overall recruiting in recent years. Roback was a big get, and in players like running back Juwan Lewis, receiver Quincy Jones, freshman OL Dwayne Brown, a pair of defensive tackles, linebacker Ike Spearman, safety Pudge Cotton and incoming defensive back Jaleel Canty, English has built up the raw number of three- (or four-) star recruits in the rotation. But ... find six wins above. If you treat the 2013 projections as legitimate (your choice), EMU would probably need to improve to perhaps the mid-80s in the F/+ rankings to have a chance at six wins (they haven't ranked better than 102nd in the last seven years), and they play three of their five worst opponents on the road.

I see this team improving in 2013, but I don't see it improving enough to make a run at the postseason.

10. But on the bright side, this guy is still in the league

This is apropos of nothing, but in my first official home game as a college student, I watched Charlie Batch throw for 256 yards and two touchdowns. That he is still in the NFL, and still providing spot starts for Ben Roethlisberger in Pittsburgh (hey, 276 yards and an 89.6 passer rating against Baltimore in Week 13 this year), allows me to pretend I'm not as old as I actually am. Never retire, Charlie.