There are a few different ways to build talent when you take over a program that has fallen on hard times. (And when you go 3-33 over a three-year span, I figure that probably qualifies as "hard times.") You can load up on junior college transfers, hoping the immediate boost they provide can carry you to both success and the ability to sign better four-year players a couple of years down the road. You can load up on transfers from other schools, hoping for the same thing. Or you can simply sign classes of mostly four-year talent, hoping that the short-term pain (and unlikely immediate success) is mitigated by the long-term pluses of steady program building.

All three of these options have pros and cons, of course. With transfers (junior college and otherwise), you are banking on their ability to become quickly assimilated into your program. You're also banking on your talent identification skills; a class of failed junior college transfers can doom you both by ensuring a bad product and by ensuring that, come Year 3, you have very little "third year in the system" talent. Meanwhile, by signing mostly freshmen, you're waiting.

With the reputation he built at North Alabama (where he was known for taking many a Division I transfer), one would probably have assumed that second-year Akron head coach Terry Bowden would have gone with either Option 1, Option 2, or a combination thereof. But while Akron's best first-year player was indeed a transfer (quarterback Dalton Williams came to Akron from Stephen F. Austin on a fifth-year, no-wait transfer), early returns are that Bowden is actually electing to take the long way. While we may learn of more fifth-year transfers in the next couple of months, it doesn't appear that there are any in the pipeline just yet. And of the 39 players he has signed on National Signing Day in the last two years, only five have come from junior colleges.

Thanks to some transfers away from Akron last year, the 2012 Zips squad was exceedingly young; but they improved regardless, at least on offense, and while close losses kept the record from improving, this was probably Akron's best team since 2008. Depth should be much stronger in 2013, though the quarterback position will probably determine whether we see much improvement in the win total.

The Akron defense defensed just 38 passes; only 11 FBS had a lower total than that. But they also recorded only five interceptions. On average, 20-25 of your passes defensed are interceptions, so a combination of stone hands and bad luck cost the Zips about four takeaways. Meanwhile, they recovered just 38 percent of all fumbles. In all, bad luck cost them in the neighborhood of eight to 10 turnovers, and three or four points, per game. It probably makes sense, then, that Akron went 0-4 in one-possession games. The Zips were at least slightly unlucky in all four of those games, though the coup de grace was the loss to UMass; UMass defensed seven Akron passes but picked off four of them (two deep in Akron territory) and returned them for a combined 80 yards.

Of course, Akron lost 11 games, and we can really only ascribe luck to four of them. The Zips lost the other seven games by an average score of 38.4 to 16.9. The steps forward were undeniable, but there obviously still a few steps left to take. 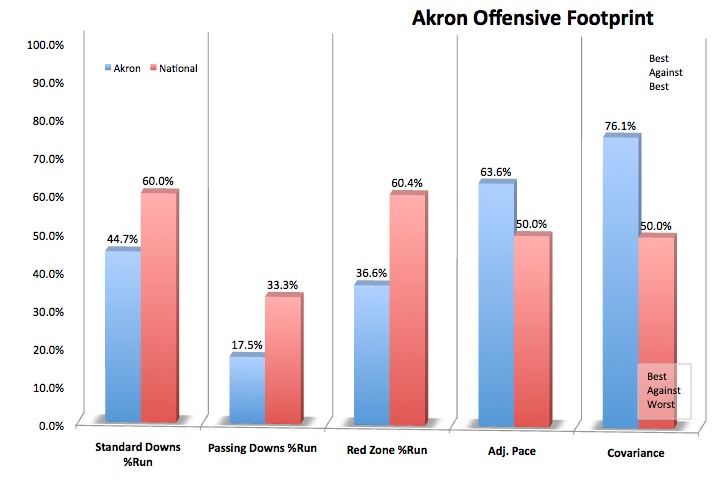 Head coach Terry Bowden is an offense guy. We've known that for a while. His first four Auburn teams (1993-96) all averaged at least 30 points per game. His first North Alabama team averaged 39. He ran the show for Akron's offense last fall, and the impact was clear; Akron's 26.1 points per game in 2012 were its second-highest average since 2003.

In 2013, however, with defense and special teams still in need of serious attention, Bowden is doing a little bit of delegation. He promoted A.J. Milwee, former North Alabama quarterback, to the role of offensive coordinator in December. There's a very good chance that Milwee is younger than you are. And while I'm not going to do any research to prove this for sure, let's just say that you probably aren't going to find two coordinators with a wider age range than Milwee and defensive coordinator Chuck Amato (though Utah's Brian Johnson and Dennis Erickson come close); at 66, Amato is more than twice Milwee's age, which is pretty fantastic.

As you see above, Akron's efficiency ratings (Success Rate) were pretty consistently higher than their explosiveness ratings (PPP+), especially on standard downs. The Zips were rather tactically successful, and in quarterback Dalton Williams, running back Jawon Chisholm and receiver Marquelo Suel, they had three players capable of carrying the load and moving the chains. But big plays were a rarity, to say the least. You can coach your way to first downs, but you need play-makers to score points, and Akron wasn't quite there yet. And now they must deal with replacing both Williams and and Suel.

Kyle Pohl, Williams' most likely replacement, was perfectly efficient in the competitive, season-ending loss to Toledo. He completed two-thirds of his passes (28 of 42) and threw two touchdown passes, though only two passes were of any notable distance (overall: 7.6 yards per completion), and he was sacked four times. It is hard to say who might have a good chance at the job other than Pohl, though, so he better work out.

Suel, meanwhile, was far from a big-play threat, but his 75 percent catch rate was outstanding; he was a reliable option on both standard and passing downs, and his consistency could be missed. Aside from perhaps senior Jerod Dillard, nobody else in this receiving corps provided any major big-play ability either, but at the very least the experience level here is strong. The quarterback, be it Pohl or somebody else, will have at his disposal a unit deep with options (none of which are amazing, all of which are decent) and players who are now in their second year in this system.

A quick passing game might not lead to many big plays, but it helps to diffuse the opposing pass rush and avoid sacks. As a result, Akron's sack rates were perfectly acceptable last season, and it might not have had much to do with the offensive line. But the line was pretty good at converting short yardage and was decent at creating opportunities for Jawon Chisholm and company. That says good things about its overall proficiency, though if the primary reasons for this decent play were guard Mitch Straight and tackle Adam Bice, that could be a problem. These two, along with center Vinnie Rizzo, have run out of eligibility, taking their 60 career starts with them. Akron does return four players with starting experience, including two sophomores, but there is a good chance that the line won't be quite as reliable in 2013. That's never what you want to hear when you've got a new starting quarterback, though again, Bowden and Milwee will give the QB quite a few easy, quick passes to throw. 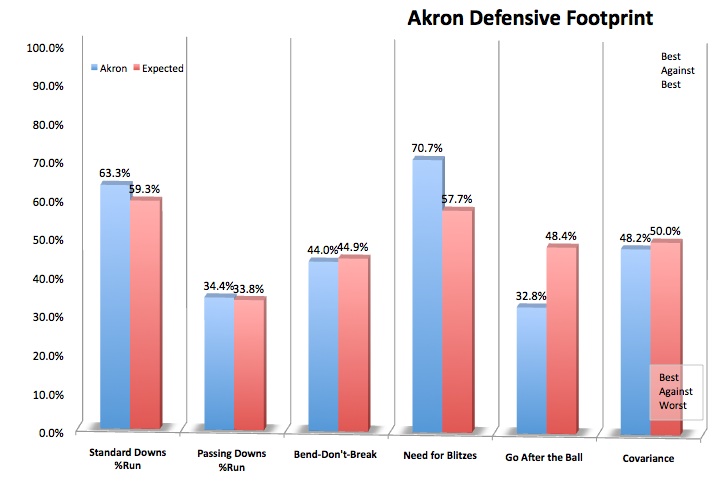 In Akron's final depth chart of 2012, the Zips produced one of the smallest defensive two-deeps you will ever see at the FBS level.

So basically, Akron's tackles were smaller than the average 3-4 end at the major conference level, the Zips' ends were essentially regular-sized linebackers, and their linebackers were basically big safeties. You can survive like this if you've got speed and experience -- Northern Illinois' defense really wasn't much bigger than this -- but Akron had little of either in 2012. And while the offene improved dramatically in Bowden's first season, the defense performed at basically the same level as 2010-11. Or, to put it another way, the defense was still pretty bad.

This year, Akron could see quite a few newcomers in the rotation. Three-star junior college transfer Keontae Hollis could make for a nice (if still undersized) tackle combo with sophomore Cody Grice (7.5 tackles for loss), junior college transfer Jon Shelby and three-star freshman Jerome Lane could provide some play-making ability and depth in the linebacking corps (a unit that lacked both last year), and an experienced, semi-interesting secondary welcomes junior college transfer Donte Williams to the mix, as well. The defense won't be much bigger this fall, but one can see how a deeper, and perhaps marginally more talented two-deep could give Amato a few more buttons to press.

7. Aggression looks good on you

The line was decent to solid against the run (Akron actually stood up to short-yardage situations quite well and made some plays behind the line of scrimmage) and should be again, but the already-iffy pass rush will be hurt by the loss of end J.D. Griggs, probably meaning another year of general passivity from the secondary. But if Amato can unearth just one or two more play-makers, the ceiling for this defense could be reasonably high.

8. Special teams are a great equalizer (for teams not named Akron)

Robert Stein is a solid kicker, Zach Paul was pretty good at booting touchbacks on kickoffs, and in general Akron covered well on kickoffs. So there's that. But elsewhere the special teams unit was lacking. There was no return man worth writing home about (not that anybody "writes home" anymore), and if Paul couldn't induce a fair catch on a punt, the return man was probably running a long way. Akron was unable to leverage field position in its favor, and it goes without saying that this needs to change in 2013.

9. You've got to start somewhere

Akron improved a solid amount in 2012, from 117th in the F/+ rankings in 2010 and 118th in 2011 to 109th. The offense was easily Akron's best since 2008, and even the defense's overall ranking improved slightly (from 108th to 105th). The Zips were a few good breaks from potentially finishing 3-9, 4-8 or even 5-7. But they didn't. Improvement on paper is fine, but improvement in the win column is the only thing that ends up mattering. Between luck, a lack of big plays, and poor special teams, Akron won just a single game for the third straight year. And with new talent needed atop the depth chart at quarterback, receiver, offensive line, and linebacker, there's nothing guaranteeing that the Zips will be too much better in 2013.

Still, improvement is improvement. For the first time in 3-4 years, Akron looked like it might be going somewhere last fall. The Zips play host to five teams projected 78th or worse in 2013, and road trips to Miami (Ohio) and UMass are in no way guaranteed losses. If Bowden can find a couple more interesting pieces, either via redshirt, the 2013 recruiting class, or an impending transfer, this team could threaten to win at least 3-5 games. Bowl eligibility is a bit too much to aim for, but when you've won three games in three years, winning three in a season would be pretty clear, definable improvement. So let's start there.

Akron does, by the way, play in the MAC, perhaps the most parity-happy league in the country. The Zips came out of nowhere to win the MAC in 2005, Buffalo did the same in 2008, and in the midst of a four-decade bowl drought, Kent State surged to the doorstep of a BCS bowl in 2012. Turnarounds can happen pretty quickly in this league, and while 2013 probably won't be amazing for Akron, it certainly bears mentioning that Terry Bowden might not have to wait too much longer to make waves.