FIU earned quite a bit of bad press for firing Mario Cristobal after a single bad season, then taking a swing at Butch Davis and missing. New coach Ron Turner, however, inherits a squad that is interesting and athletic and has spent much of the last two years underachieving. Good luck figuring out what this team might do in 2013.

Share All sharing options for: 2013 FIU football's 10 things to know: Facts and wildcards

Here is a list of things that are either true or mostly true.

Turner inherits a FIU squad that a) has underachieved for two straight years, and b) has more raw athleticism and talent than much of its C-USA competition. Anything from 3-9 to 9-3 in 2013 won't surprise me.

3. The defense came around a little later than expected

Now, make no mistake: FIU's biggest problems were on the offensive side of the ball in 2012. Starting quarterback Jake Medlock missed three games (Adj. Points Per Game with Medlock: 27.1; without: 20.2), starting running back Kedrick Rhodes missed three games, and the Golden Panthers just couldn't ever generate any sort of offensive attack. This was to be expected to some degree, simply because of the loss of all-world receiver T.Y. Hilton following the 2011 season; but the injuries didn't help, and the complete and total collapse of the line was unexpected.

It also didn't help, though, that the defense wasn't quite as good as it could have been. A unit absolutely loaded with interesting seniors looked great late in the year (last five games: 23.5 Adj. PPG allowed) but was slightly below average at first (first seven games: 28.8 Adj. PPG allowed). And by the time it rallied, the damage to the 2012 campaign had already been done. FIU began the year 1-8 with four tight losses. 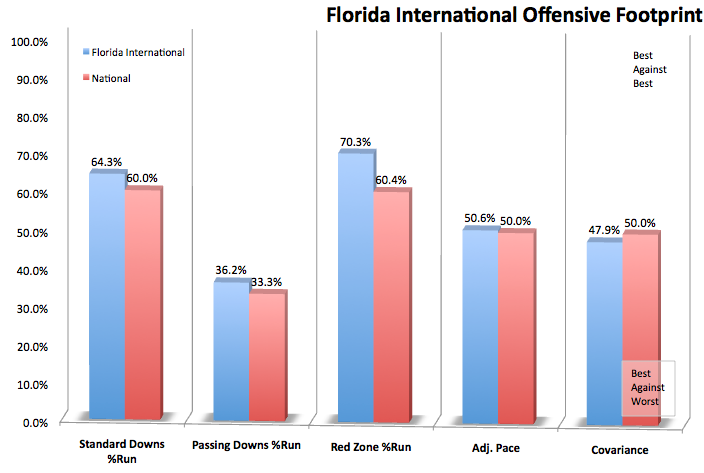 4. Jake Medlock might be a bit too tough (or maybe his line was just terrible)

It isn't difficult to see why Jake Medlock gets hurt a lot: He doesn't exactly shy away from contact. Medlock injured his right shoulder late in 2011, fractured a foot and missed two games early in 2012, left the Western Kentucky game early with a head injury, and missed the final game because of his foot, too; while some of that might not be because of the number of hits he takes ... he does take a lot of hits. He was sacked 24 times in 287 pass attempts, and he rushed seven times per game outside of the sacks. He clearly doesn't avoid hits, even if some of them (the sacks) were not necessarily of his initiative.

When Medlock was down, Cristobal was forced to shuffle between a load of freshmen, all pretty highly-touted, none quite ready for action. E.J. Hilliard took even more sacks than Medlock (and didn't rush as well), and Loranzo Hammonds, Jr., was used mostly as a run threat (though he wasn't amazing at that). FIU's production depended on Medlock's health, and he was rarely healthy in 2012.

5. The receiving corps is intriguing

FIU must replace 50 percent of last year's targets, which is a little scary until you realize that a lot of those targets were pretty unproductive. Wayne Times was a steady, efficient option for an offense that was mostly lacking of such a thing, but you can replace a guy who averaged 6.4 yards per target. Jacob Younger had his moments as the No. 2 receiver, but in seniors Willis Wright and Glenn Coleman, the Golden Panthers have two receivers who showed infinitely more upside, albeit in just 5.3 targets per game. The two carry a similar stature and combined for a 60 percent catch rate and a ridiculous 22.6 yards per catch. In fewer than half the targets, Wright outgained Times for the season, powered by a destructive three-game stretch: against Middle Tennessee, Troy, and Western Kentucky, Wright caught 14 passes for 366 yards and three touchdowns. His quantity dropped off in November, but not his explosiveness; in three games, he caught five passes for 159 yards and three scores. He needs to become more of an every-down threat, but wow, the upside here is enormous.

If Wright can make the transition to The Man -- or, in Ron Turner parlance, if he can turn into FIU's Brandon Lloyd -- then the rest of FIU's skill position lineup takes shape nicely. Coleman should be a capable No. 2, and any number of former three-star recruits could conceivably step up and become a decent No. 3. As long as Medlock is upright and in one piece, that should lead to a solid passing game. The run game, however, is still a mystery. Kedrick Rhodes was unreliable last year, both in terms of health and production, and an all new offensive line could either be a blessing or a further curse.

6. An awful line starts over

In 2011, FIU ranked 63rd in Adj. Line Yards and 33rd in Adj. Sack Rate. The Golden Panthers returned four starters from that line, line coach Alex Mirabal returned, and from what I can tell, there were no notable injuries suffered in 2012. And this line went from one of the better units at the mid-major level to being one of the worst in the country. FIU couldn't open big enough holes for its runners and couldn't protect the quarterback. I'm willing to believe that some of these line stats are on the skill position players -- Medlock probably needs to throw the ball away quicker, and Kedrick Rhodes needs to just be a better running back -- but, well, Rhodes was the running back in 2011, too, and Medlock was only sacked five percent of the time in 2011. This was one of the most disappointing units in the country, period.

In other words, it's a pretty good time to hit the reset button. FIU returns only eight career starts, and that might not even remotely be a bad thing. New line coach Steve Shankweiler is ridiculously experienced; he'll need to call on that experience quite a bit. 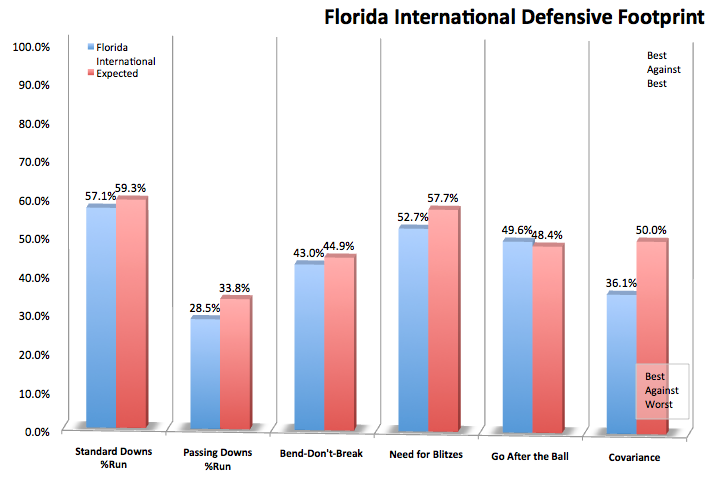 Again, the FIU defense wasn't bad last year; it's just that the expectations were quite high. For the season as a whole, FIU defended the run relatively well, but the Golden Panthers' calling card was on pass defense; they had one of the 20 most efficient pass defenses in the country, showing some cracks on passing downs but playing close to the line of scrimmage on standard downs. FIU corners logged six tackles for loss and defensed 23 passes in 2012; the aggressiveness wasn't just confined to the back line, however. Nine different linemen made at least 1.5 tackles for loss, slicing into the backfield with regularity against the run.

The D has more three-star players than a Sun Belt team is supposed to be able to recruit, and it showed. There was a potential discipline issue here, however, with the big plays allowed on passing downs, with the way the defense's performance fell off after the first quarter (and first down), and with the way it was basically a sieve in the red zone. New defensive coordinator Josh Conklin (the Citadel's defensive coordinator in 2010-11 and Tennessee's safeties coach in 2012) could have some fun here if he can cut down on the mistakes. That might be a tall order, of course, with a thinned-out depth chart.

Both end Tourek Williams and safety Johnathan Cyprien should get selected reasonably high in this month's NFL Draft. By all accounts, Cyprien had a fantastic week at the Senior Bowl and did perfectly well at the combine. He made plays all over the field in 2012 for FIU, defensing nine passes (he had four picks and was apparently the only FIU player who could actually hold onto the ball when he got a hand on it) and logging 3.5 tackles for loss. Williams, meanwhile, was the most aggressive and effective lineman on a pretty aggressive and effective line.

Cristobal is a great recruiter, but did he recruit well enough in Miami to put FIU in position to replace two players of this magnitude?

Of the 23 defensive returnees listed above, 13 are former three-star recruits according to Rivals.com. That's better than a good majority of Conference USA teams. Nine of those 13, however, are either freshmen, redshirt freshmen, or sophomores. If these players live up to their recruiting rankings, the foundation for this FIU defense is strong in the coming years. But in the short-term, inexperience could be an issue; four of the top seven defensive backs, each of the top three linebackers, and three of the top seven linemen are gone. The high-upside youth will be getting thrown into the deep end pretty early.

This really might be a perfect year for a new coach to take over a blank canvas that has a lot of interesting features, like Kevin Sumlin at Texas A&M last year. But ... is Ron Turner a Kevin Sumlin?