2013 ECU football's 10 things to know: Pirates have experience and momentum

Head coach Ruffin McNeill comes across as one of the nicest coaches in college football, but a pretty mean, experienced ECU team could be the favorite to win the C-USA East in 2013, at least if that bendy defense stiffens a bit.

Share All sharing options for: 2013 ECU football's 10 things to know: Pirates have experience and momentum

Quite a bit of what I wrote about Rice last week can also be applied to East Carolina. Coach looking like a dead man walking in early October? Kind of, yeah. Major rally in the second half of the season? Check. Unlikely momentum heading into 2013? Absolutely. Tons of experience filling the two-deep? Yes.

Both teams won five of six to finish the regular season and looked thoroughly decent in doing so, and while Rice returns a bit more experience overall, ECU has plenty to burn.

In a conference full of semi-interesting and flawed Conference USA programs -- I'm currently struggling to differentiate between FIU, Louisiana Tech, Middle Tennesseee, North Texas, Southern Miss, Tulane, UAB, UTEP, and UTSA in any major way, really -- it appears ECU has a leg up in this year's East Division. I like Rice and Tulsa in the West, and I'm not sure what to think of Marshall yet (we'll see in tomorrow's preview), but if a new defensive coordinator can do anything with a unit that was pretty consistently below average in 2012, Ruffin McNeill's seasoned Pirates should have a major role to play in who reaches the C-USA championship game.

2. After a long spring and summer, you determine your starters...

...and two games into the season, you've made some pretty significant changes. Quarterback Rio Johnson and running back Michael Dobson were ECU's starters in the backfield when the season began versus Appalachian State. Johnson won a lengthy battle with Shane Carden in the offseason but threw three interceptions in 29 passes versus South Carolina and was benched, while Dobson was mostly ineffective and finished third on the team in carries. He's now a defensive back.

The change from Johnson to Carden, and from Dobson to Reggie Bullock to Vintavious Cooper eventually began to turn the tide for an ECU offense that look absolutely dreadful for most of September.

The defense was pretty high-variance overall -- it looked great against UTEP, Memphis, and Tulane and was a horror show against UCF, UAB, Marshall, and especially Navy -- but its average didn't change much as the season progressed. The offense, however, improved by more than a touchdown over the season's final two months. And with Carden, Cooper, four of the top five receivers, and five linemen with starting experience returning, one would think that the Pirates' performance level from mid-October onward could be maintained into 2013. 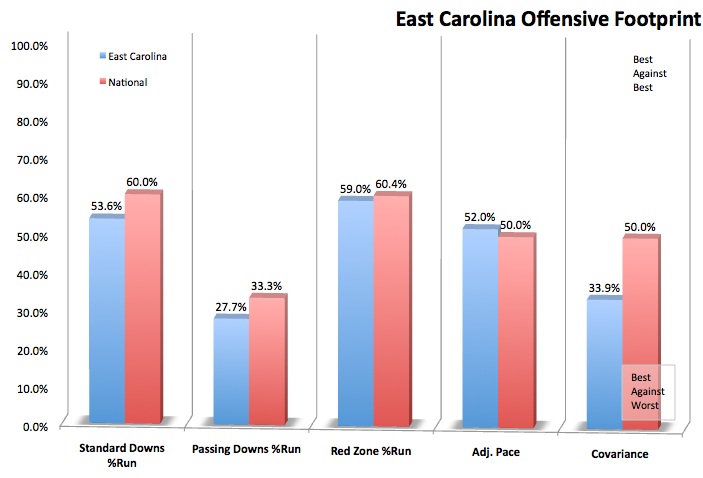 Shane Carden was the No. 1 quarterback for most of the year, but while the offense did improve under his watch, it took a little while.

He completed 48 of 68 passes for 694 yards and seven touchdowns versus Memphis and UAB, 31 of 43 for 305 yards, four touchdowns and a pick against Houston, and, in a defining performance, 38 of 47 passes for 439 yards, three scores and no picks in a 65-59 win over Marshall. Johnson, seeing the writing on the wall, left the team, which means that it's Carden's show. Former star recruit Cody Keith waits in the wings, but one assumes Carden would have to something pretty drastically bad (or get hurt) to lose his job this time around.

For the season as a whole, ECU's explosiveness rankings (PPP+) were pretty terrible. On the ground, ECU was neither efficient nor explosive, but a high-percentage passing attack was often done in by the simple lack of big plays. That did shift as the season progressed, however. Vintavious Cooper had a pretty tremendous eight-game stretch (from UNC to Tulane, Cooper rushed for 893 yards, 5.8 per carry) before fading late, but most of the play-making seemed to come from a big-time No. 1 receiver and a reserve.

Then-sophomore inside receiver Justin Hardy combined the lovely catch rate one expects from an inside receiver in an Air Raid-tinged offense (72 percent) with solid big-play ability; he caught 17 passes for 388 yards in a three-week span in October, then caught 16 passes for 171 yards against Marshall. Meanwhile, then-freshman Jabril Solomon made the most of his limited opportunities. He caught five passes for 170 yards in four games in October and caught seven for 171 in the final three games. He is listed as the first-string X receiver this season, and his presence should complement Hardy's nicely. If ECU can get anything from any number of other former three-star recruits -- Lincoln Riley's spread has certainly attracted interest from receiver recruits in the area, though it does bear mentioning that ECU ran more in 2012 than it had been in previous years -- this should be the best passing game ECU has had in three years.

ECUs' raw line rankings -- 27th in Standard Downs line yards per carry, 29th in Power Success Rate (short yardage success), 24th in Stuff Rate (avoidance of tackles for loss in the run game) -- suggest a pretty high-quality performance from the Pirates' line. The opponent-adjusted line stats (91st in Adj. Line Yards), however, tells you that ECU didn't exactly face much competition from stout defensive lines, at least not after the South Carolina game.

Still if success breeds future success, then signs point to a decent line in 2013; three two-year (or nearly two-year) starters return, including all-conference guard Will Simmons. And while there are three ACC teams on the 2013 schedule, it's not like Conference USA is loaded with many fearsome defensive fronts. 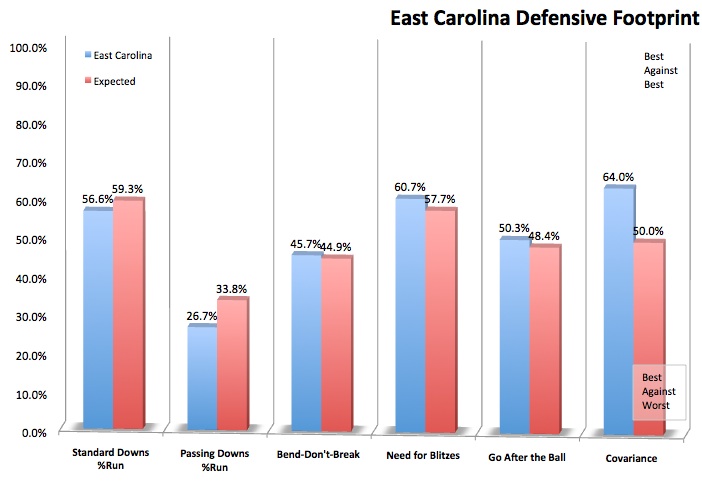 In the three years before Ruffin McNeill was hired as ECU's head coach and brought Brian Mitchell in as his defensive coordinator, East Carolina's average Def. F/+ ranking was 40th, with a peak of 22nd in 2008. In the last three years, the Pirates' average ranking has been 90th; after a rebound to 71st in 2011, ECU fell back to 91st in 2012, and Mitchell was let go. McNeill called on an old face to restore success: Rick Smith, Skip Holtz's defensive backs coach at ECU from 2005-09, now takes the reins of the defense. It appears he will maintain Mitchell's 3-4 alignment, but he is tasked with stiffening up what was a far-too-flexible defense in 2012. The Pirates prevented big plays reasonably well but bent far too much for a bend-don't-break approach to work, especially in the secondary.

Overall, ECU's Rushing S&P+ and Passing S&P+ rankings were about the same -- 72nd and 78th, respectively -- but opponents had no problem with the idea of picking on the pass defense. They threw three percent more than expected on standard downs and seven percent more on passing downs, meaning they had no fear for either the ECU pass rush (which wasn't awful) or a bendable set of cornerbacks. The safeties were, in theory, pretty decent at big-play prevention, but ECU just couldn't get off the field and faded dramatically as each half progressed.

Again, ECU's PPP+ rankings suggest that big plays weren't as much of a problem for the ECU pass defense as allowing 12-yard pass after 12-yard pass. Safeties Damon Magazu and Chip Thompson seemed to play their "last line of defense" role reasonably well, but Smith, who also takes over as defensive backs coach, must figure out how to coax more consistency out of a unit that seemed to possess decent play-making ability at times. Corner Adonis Armstrong defensed 15 passes in 2012, while Magazu and Thompson chipped in another 11. Dobson moves from running back to defensive back to plump up the depth a bit, and junior college transfer Detric Allen could certainly work into the rotation pretty quickly.

The front seven possesses a wealth of both size experience, not to mention some attacking capability in players like end-turned-OLB Derrell Johnson and tackle Terry Williams. But opponents will continue to pick on the secondary until ECU proves it has improved in that regard.

100. Percentage of East Carolina head coach Ruffin McNeill's camera time in which he was encouraging somebody. McNeill might be the easiest coach in the country to like. He spent most of his game patting players on the helmet, making eye contact and pumping his fist to somebody, or speaking with clear admiration to an assistant. Play for him, and you play for one of the best father figures in the country.

I root for nice guys to succeed in the often cutthroat industry of college football, and McNeill appears as nice as they come. But with an upgrade in competition forthcoming (ECU moves to the American Athletic Conference soon), McNeill would be well-served to capitalize on his late-2012 momentum and win quite a few games in a watered-down C-USA. The good news is, the odds of that are pretty good.

10. If the defensive mess gets cleaned up just a little bit...

The overall slate is not very forgiving, both with three ACC contests (Virginia Tech, at North Carolina, at N.C. State) and a trip to Marshall, the Pirates' primary East division competition; but there are wins to be found in 2013 if ECU can stiffen up just a little bit defensively and fully utilize the experience and newfound play-making ability it unearthed near the end of last season. This team has more potential than most C-USA teams in 2013. Time to take advantage of that.

• Star quarterbacks of tomorrow: what’s it take to win the Elite 11?