Doc Holliday has done a rather stunning job of amassing star recruits in three years at Marshall, but he only has 20 wins to show for it. If a breakthrough is going to come, it should come pretty quickly; and if it does, the Thundering Herd could become the preeminent power in the Future C-USA. Peace, love, and pannkaka blockeras.

Share All sharing options for: 2013 Marshall football's 10 things to know: Your future overlords

Following the 2012 college football season, Conference USA lost Houston, Memphis, SMU, and UCF to the new American Athletic Conference, also known as the old Big East. In 2014, the conference will lose East Carolina, Tulane, and Tulsa. As compensation, C-USA raided the Sun Belt for FAU, FIU, Louisiana Tech, Middle Tennessee, North Texas, and (in 2014) Western Kentucky; it also got creative in bringing on Charlotte, Old Dominion, and UTSA, mostly unestablished football programs, with an eye toward the future.

One can see these moves working out reasonably well for the conference long-term. C-USA could establish mid-major footholds (whatever that's actually worth to you) in or near Miami (FAU and FIU), Dallas (UNT), San Antonio (UTSA), Charlotte, Norfolk/Richmond (ODU), and Nashville (MTSU). From a 20,000-foot view, these moves make relative sense.

In the short-term, however, realignment will shortly have siphoned away most of C-USA's established football quality. In fact, teams that have won 13.5 of C-USA's 17 conference football championships will no longer be a part of the conference beginning in 2014. Only Southern Miss (co-title with Houston in 1996, outright in 1999, 2003, and 2011) will remain.

Aside from perhaps Southern Miss again, what current and future C-USA program is most likely to take advantage of this watered down league? To answer that, we should probably check up on what's happening in Huntington, West Virginia.

In three years as Marshall's head coach, Doc Holliday, a former ace recruiter at N.C. State, Florida, and West Virginia, has proven to be ... an ace recruiter. Marshall's two-year recruiting ranking of 65th places the Thundering Herd ahead of Duke (67th), Boise State (68th), Georgia Tech (69th), BYU (70th), Syracuse (72nd), UConn (73rd), Boston College (76th), and UCF (80th), among others. When combined with transfers he has brought in, Holliday has compiled a roster with nearly as many three- and four-star recruits as the rest of C-USA combined.

Thus far, this influx of (perceived) talent has not made much of a difference on the field. In his fianl four seasons at Marshall (2006-09), former coach Mark Snyder averaged 4.8 wins per year. In three seasons, Holliday has averaged 5.7. Marshall eked out bowl eligibility with five one-possession wins in 2011, then upset future conference mate FIU in the Beef O'Brady's Bowl, but the Herd fell back to 5-7 in 2012.

In terms of F/+ rankings, there has certainly been improvement in the last couple of years. After first-year regression to 102nd in the country, Marshall improved to 84th in 2011 and 82nd in 2012. But at some point, results need to match recruiting. With 15 starters returning from a squad that broke through on offense and regressed on defense, Holliday could begin to put the pieces together in 2013. Or at least, he should.

3. Either solid or terrible, no in between

Marshall spent most of the 2012 season playing relatively well, but a few ill-timed eggs skewed its averages a decent amount.

These eggs weren't the primary cause for the Thundering Herd's poor record -- even playing well, the odds were decent that they might lose to solid WVU and UCF teams, and they still were going to beat Western Carolina no matter what -- but typically these types of random lapses signify youth and inexperience, of which Marshall still had plenty in 2012. A combination of inexperience and bad luck (regression toward the mean, perhaps) probably also contributed to Marshall's 2-4 record in one-possession games. Go 4-2, and you're bowling for the second straight year.

Regardless, aside from these three games, Marshall WAS a solid, competitive team. With more experience comes, in theory, more consistency. 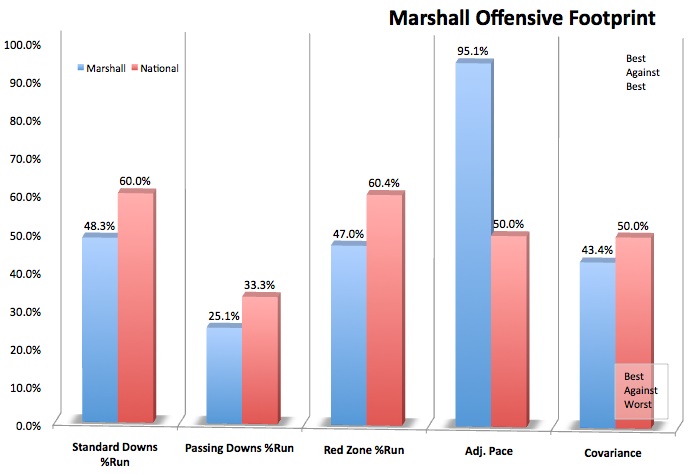 4. A surge without the handcuffs

As the 2012 season approached, offensive coordinator Bill Legg spoke giddily about "taking the handcuffs off" of the offense. The 2012 offense was experienced enough that, in his third year in charge of the Marshall offense, Legg was finally going to be able to do what he wanted.

The difference was obvious and immediate. After ranking 107th in Off. F/+ in 2010 and 98th in 2011, Marshall surged to 31st last fall. Quarterback Rakeem Cato completed 70 percent of his passes and threw for nearly 40 touchdowns, three receivers were targeted at least seven times per game, and another nine were targeted at least once per game. Marshall operated at the fastest pace in the country, turning decent per-play averages into monstrous per-game totals and wearing opposing defenses down. The Thundering Herd tended to start slowly (101st in Q1 S&P+) but found a nice rhythm after the opening minutes (56th, 53rd, and 69th in Q2-Q4 S&P+, respectively).

Marshall probably shouldn't expect another such surge in 2013, simply because another surge of that magnitude isn't possible. But decent improvement could follow the return of Cato, leading receiver Tommy Shuler, the top three running backs, and a whopping eight linemen with starting experience. Of course, the experienced players will have to fend off some interesting young guys, as well.

Yes, the 2012 Marshall offense was quite a bit more experienced than previous units. But that speaks more to the youth of 2011, as Marshall was still pretty young overall. That is obvious when you begin to take a look at the skill position roster. Cato is only now a junior, and the top three running backs are all sophomores; all three -- Kevin Grooms, Steward Butler, and Remi Watson -- held their own as freshmen in 2012, and Grooms was particularly impressive and explosive. All three need to improve in terms of play-to-play efficiency, but ... they were freshmen. Of course they were going to be inefficient.

But the youth takeover could continue in 2013. The players mentioned above are still young, as is Tommy Shuler, but Marshall welcomes two four-star freshmen into the fray at receiver (Angelo Jean-Louis and Deontay McManus), along with a three-star freshman (Shykeem Pitts), and an intriguing three-star sophomore in Davonte Allen. Throw in old hands of sorts, like Penn State transfer Shawney Kersey, possession receiver Demetrius Evans, and reliable tight end Gator Hoskins, and you've got a receiving corps that could be among the deepest mid-major units in the country, off-setting one of the most interesting, young running back units in the mid-major universe as well.

The Marshall offensive line had six different starting lineups in 2012; only one member of the year-end two-deep failed to start at least one game. A mix of injury and plain-old shuffling held the unit back a bit, but assuming experience and good health solve some of the general woes the line suffered. Still, it wasn't an awful line by any means. The quick passing kept the sack rate down (and the pass protection on passing downs was quite solid), and the line excelled in power rushing situations. Now it gets to reap the benefits of the shuffling, as eight of nine players with starting experience return and will be pressed by young players like three-star redshirt freshman Josh Murriel and Sweden native Sebastian Johansson, who is evidently having himself a lovely spring. Pannkaka blockeras all around. 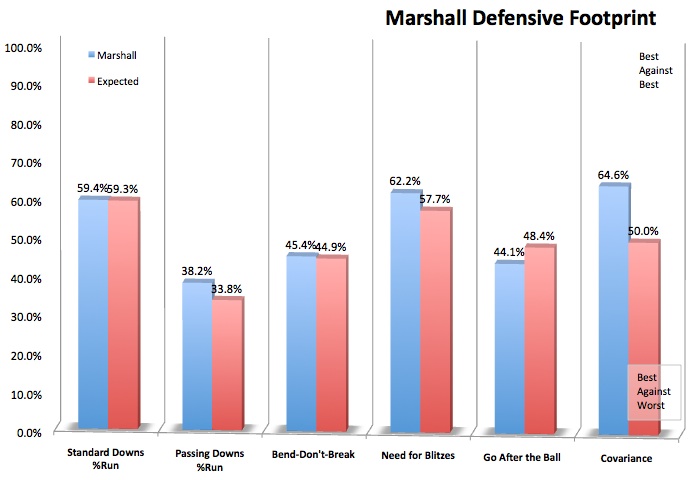 7. No star power, no production

Following the loss of all-world lineman Vinny Curry, Marshall's defense was predictably less aggressive, or at least less successfully aggressive. That left defensive coordinator Chris Rippon in a pretty tentative place, and the results were poor. Marshall plummeted from 66th in Def. F/+ to 117th, and Rippon resigned in November. Holliday replaced him with Temple defensive coordinator Chuck Heater, who oversaw a similar dynamic in Philadelphia over the last two years: good defense in 2011 (45th in Def. F/+) forced to replace stars and regresses (76th).

Heater inherits a unit that was terribly thin in 2012 -- the secondary basically played only five guys all year, the defensive line basically played 4-5, and offensive players took up most of the spots on special teams. The 2013 defense will have all of the experience in the world, and there are some high-upside youngsters at linebacker and in the secondary, but aside from linebacker Jermaine Holmes, there are few proven entities here. It's still in "all-potential" mode, like the Marshall program as a whole.

8. Star power in the middle of the defense

While Marshall missed Curry tremendously, it did still have Holmes, who logged 13.5 tackles for loss, mostly against the run. Toss in nose tackle Brandon Sparrow, and you've got a rather impressive pair of play-makers in the middle of the defense. Ends Alex Bazzie and Jeremiah Taylor aren't so bad themselves. As with the running backs, the down-for-down consistency was lacking, and that should improve with experience, but the cupboard isn't bare in the play-making department.

Following an injury to starter Darryl Roberts, Marshall officially had three cornerbacks and two safeties available in 2012. The complete lack of depth took its toll. That said, the reinforcements have arrived. Roberts returns, as do 2012's other three corners (led by former four-star recruit Derrick Thomas), and they will be complemented by a pair of high-upside redshirt freshmen (A.J. Leggett, who redshirted himself because of injury in 2012, and Andre Scott), two three-star junior college transfers (Neville Hewitt and Taj Letman), and two more interesting, three-star freshmen (Michael Johnson and Chocolate Wilson). The loss of both starting safeties hurt, but their overall production (not to mention Marshall's horrendous pass efficiency stats) suggests they were replaceable. The pure number of options leads me to believe that Marshall's secondary should be, at worst, no worse than last season.

Marshall returns a boatload of play-makers from a team that was pretty close to being much, much better in 2012. And the squad is, overall, still young enough to return a large number of experienced play-makers in 2014, as well.

So when does the surge begin, then? Now? Another year from now? Ever? Doc Holliday truly has done a startling job of amassing talent and raw athleticism in Huntington, but as I said at the top, that has to eventually translate into results. Marshall has won five, six, and five regular season games in Holliday's three seasons; after struggling on the offensive end, he fixed those problems just in time for his defense to fall apart. Both units have performed well at some point in his three years, and if the pieces come together in 2013, lord knows there won't be a lot of resistance within the conference. It's probably Marshall vs. East Carolina for the C-USA East title in 2013. Can Marshall take a couple of steps forward and establish itself as the preeminent Doc Holliday has done a rather stunning job of amassing star recruits in three years at Marshall, but he only has 20 wins to show for it. If a breakthrough is going to come, it should come pretty quickly; and if it does, the Thundering Herd could become the preeminent power in the Future C-USA.power in the Future C-USA?